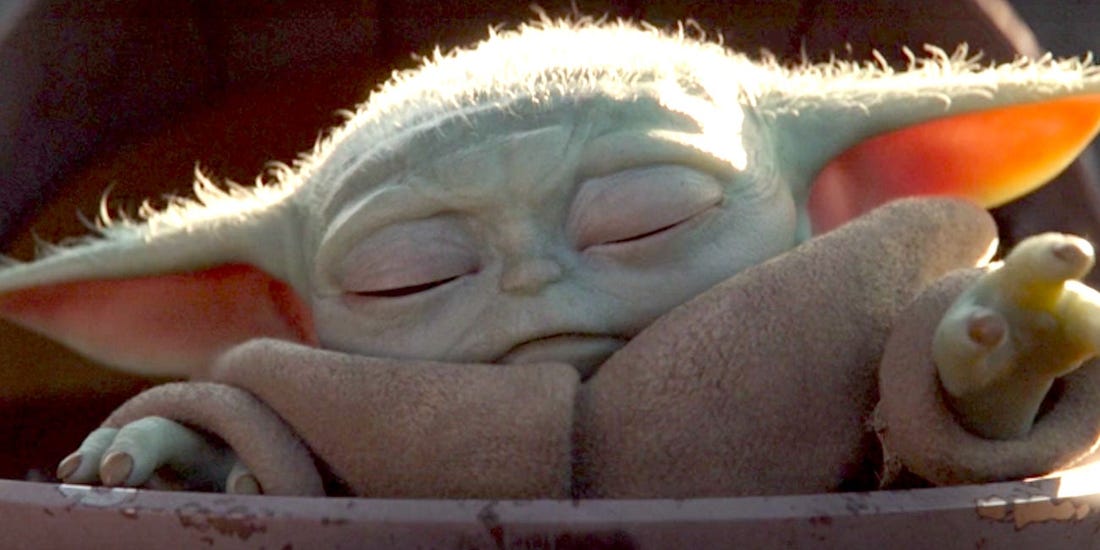 ** Spoilers for Chapter 6 of  The Mandalorian on Disney+. You’ve been warned.**

Each and every week, we tune in to the adventures of baby Yoda to see what he’s doing out there in space with his Dadalorian. Sometimes, though, there’s just too much going on for one little baby to handle, and this week, he had such an adventure that I’m so worried for baby Yoda! He needs a nap!

Baby Yoda was on a ship all by himself with a scary droid after being dropped on the ground by Bill Burr! He had an eventful time!

Tag yourself: I’m the Mandalorian dropping to the ground to make sure baby Yoda is okay. pic.twitter.com/9zgWKujBPq

While baby Yoda had to fight off a mean evil droid (who he thought he shot with the Force), it was the dropping of baby Yoda by Bill Burr that had fans screaming on Twitter. The comedian joined this episode when Mando had to help break someone out of prison, but I refuse to learn his name or even care about him because he dropped baby Yoda.

When their ship is suddenly dropping out of hyperspace and getting ready to land, the droid flying doesn’t give anyone a warning, and so, in the process, Bill Burr, who was threatening to take baby Yoda away from Mando, cannot hold onto the little baby and drops him on his face.

Bill Burr, you deserve all the angry tweets coming to you. You have to protect that baby!!!!!

Can we cancel Bill Burr for dropping baby yoda?

@billburr I love your work, but if you drop that fucking baby yoda we gonna have a problem.

.@billburr I was heated when you dropped Baby Yoda bro

Without spoiling too much of the newest Mandalorian episode, we all agree that Bill Burr is our new least favorite person on earth for dropping baby Yoda, right?

Man, I love @billburr but when he dropped baby Yoda I was ready to stab him in the chest for about half a second there. #StarWars #TheMandalorian #billburr #BabyYoda #ThisIsTheWay #IWillDieForHim

When he dropped baby yoda on the floor pic.twitter.com/iCZPWwhGmC

I mean…there’s always the bright side.

There are only two episodes left in the baby Yoda saga, and I’m not ready to not have him in my life every week. Jon Favreau, please give me more. Baby Yoda can save the world.