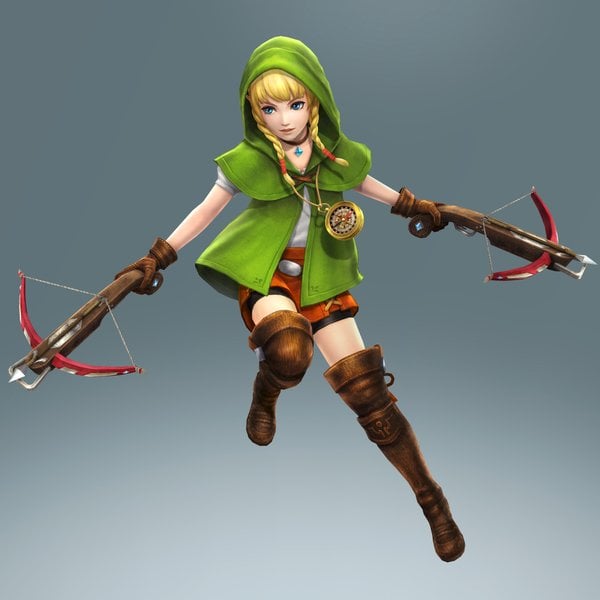 Ever since Linkle was announced at the most recent Nintendo Direct, I’ve seen a lot of conflicting feelings about her appear on the internet — and I have shared in those feelings myself. Here are some responses to Linkle that I have seen:

I’m excited as all get out about Linkle. But I also simultaneously feel every other item on that list. I feel disappointed. I feel angry that I and everyone else still care so damn much about a game franchise that, frankly, imbued me with some pretty messed up ideas about femininity when I was a kid.

For example, I grew up thinking that Sheik was bad-ass and Zelda was useless and naive. After all, kid-me justified, Zelda couldn’t seem to keep from being kidnapped and destroying her kingdom by accident — except when she dressed as a guy, at which point she finally seemed to get her shit together. As an adult, I see Sheik and Zelda as two parts of a complicated character who makes mistakes and has important flaws, but who exists within a game that doesn’t seem to respect her much (and which has some other problems). But back then? I didn’t really get that vibe. All I understood was, “Masculine strong! Feminine weak!”

If a character like Linkle had been around back then, it might have helped – but who knows? I mean … look at Linkle. Kid-me would’ve just put her in the “Sheik” box and continued to hate pink. I remember picking Trini as my favorite Power Ranger because she wore yellow; I hated Kimberly because pink was “for girls” and therefore it meant stupid. Even though Kimberly was actually pretty rad in the original show, Trini was “the smart one” – and the less feminine one. That message stuck with me — and it didn’t hurt that it was everywhere. It wasn’t until I was in my early twenties that I finally started realizing that my rejection of feminine trappings was motivated by deep, internalized misogyny – and that was around when I sewed Zelda’s dress from Ocarina of Time and started getting over myself.

But that’s another story. Back to Linkle.

I made up a phrase this past month: it’s “Lara Croft feminism.” It’s like the phrase “white feminism,” except for videogames specifically. And much like the phrase “white feminism,” I expect it will inspire some cautious hand-raising, some sputtered, “but I like Lara Croft,” and plenty of misunderstandings. So let me just reassure you, I like Lara Croft, too – and I like Linkle. They are the heroines that I craved as a child: a bad-ass, thin, conventionally attractive white woman who wears an ever-so-slightly feminized twist on a male protagonist’s attire (whether that guy is Indiana Jones or Link). A chick who can hang. A Lola Bunny.

I say that this is the heroine that I dreamed of as a child. And I do mean that. Because, let’s recall — my tastes as a child were, well, childish. Simplistic. All Sheik, no Zelda. I wanted to see a hot tomboy heroine, because in my mind, a feminine heroine didn’t exist and couldn’t even be imagined. I wanted to see a heroine who got muddy, who wasn’t afraid of bugs, who played kickball, who ran as fast as the guys — because that’s the girl I wanted to be, back then. And once I hit middle school, I began to understand that in addition to being “one of the guys,” I also needed to look a certain way – like Sophitia, ideally. Or Lara Croft. Or Samus Aran. But not like Princess Peach. Like I said. All Sheik, no Zelda.

But it’s more complicated than that, right? It always is. Like, I love Linkle’s outfit. I love her dual crossbows. I love her cute braids. I love the way her design unites feminine attire with masculine. Link’s old aesthetic was already quite androgynous, anyway – and there’s something to be said for having an androgynous male lead represent the player in the first place. As opposed to a Master Chief or a Marcus Fenix … not that those guys don’t have their place in my heart, as well. Because, like I said — it’s complicated.

There’s a nuanced discussion to be had about how Zelda games in particular have gendered fashions and fighting styles – and some of that has to do with how Nintendo games tend to approach this, in general. Let’s look at Nintendo’s notable heroines: we have Princess Peach, we have Samus, and we have Princess Zelda (and Sheik, and Tetra). We could simplify those characters into “masculine” and “feminine” boxes and point out how the feminine unites with the passive, sure. Pink-dressed Zelda and Peach end up kidnapped; Sheik and Samus get to go on the offense. But I think our collective interpretations of those characters tend to go deeper than that. We subvert them; we reclaim them. We’ve grown up with them and we have our own identities interlaced with theirs. They are “us,” or they have been, for moments in time that we remember.

As another example — why do people care so much about seeing a woman play James Bond? Or seeing Idris Elba finally claim the role? Or seeing James Bond seduce a man? Or any number of other ideas that would make for fantastic fan-fiction fodder? If you read the original James Bond novels, well … you’ll find the source material to be an abysmal disappointment. They’re far worse than the original Zelda games, I can assure you. What value could there be in reclaiming that old role, then?

Personally, I’d rather see a completely different story get told. Seeing James Bond get recast, well — that’s not going to solve the gazillions of other problems with his stories, and The Legend of Zelda provokes the same concerns for me. I just wrote last week about how I think Indiana Jones‘ core conceit is too broken and too fundamentally imperialist to survive further retellings – not by Harrison Ford, or anyone. But the story will be retold, anyway, because there’s money involved — but also, emotions and nostalgia are involved.

And it’s not just that. The reason why people want to recast these roles, I believe, is because it’s a microcosm – a metaphor, perhaps – for the roles we’d like to see recast in real life. If the Hero of Time can be a woman, if James Bond can be a black man – then why not also envision more diverse CEOs, business owners, and world leaders? The problem arises when these characters don’t ever get to be heroes at all – or if they do, they’re “safe,” somehow. They’re light-skinned, they’re slim, they’re accommodating, and they’re just helping out for a second before the white guy comes back (phew). By framing them as a novelty, a one-off, a joke, a tiny advancement snuck in the side door past the “angry gamers” who might object if they noticed it … that is not good enough. It’s not enough. But it’s a crumb treasured by the hungry. You have to buy this, or else Videogames will hear how ungrateful we’ve been.

Is Linkle a gender-swapped novelty, a marketing move intended to pander to customers, to troll us all into a shocked response? Women in games: they’re so hot right now! Maybe. But so was Lara Croft, everyone’s favorite gender-swapped Indiana (before they swapped that back for Uncharted, to which now every Tomb Raider gets retroactively compared and accused of “copying”). And so was Samus Aran, whose helmet-removing reveal was the ultimate lulz of the day. A woman? Doing all of that? Wow! What’ll they think of next!

Not too much has changed, I guess. Because I still feel like I can’t believe it. A woman – in a videogame – wow. You can mock me for feeling impressed; I wouldn’t blame you. I know it’s cooler for me to say I’m not at all bowled over by Linkle, or for me to act all eye-rolly about the idea of a big corporation caring about anything, let alone its female players. I know how this works.

I won’t even bother to remind you about the little girl version of me who would have cared about this way more than I do. I won’t remind you, because I know you don’t need that sort of emotional manipulation. You know, deep down, why people care about Linkle – even if she is also, at the same time, an undeniable disappointment. Another conventionally cute white blonde with a ranged weapon, another background character in a non-canonical game. A puzzle piece that does not even begin to reveal the whole picture of what we might have wanted. And not even a good puzzle piece – one of the monochromatic ones, where you honestly don’t even know where to put her yet. So we’ll just leave her on the table, for now, and go “Hmm.” And then we’ll keep building.