The Legend of Korra Newbie Recap: “Day of the Colossus” 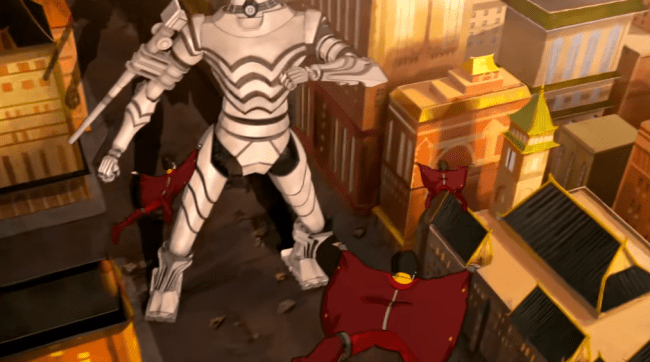 Only two more episodes of Korra left. WILL THIS BE A MUSICAL EPISODE?

Breaking: This is not a musical episode.

We start off with an un-singing Bolin being decidedly BAMFy by earthbending an entire dang wall off of Our Heroes, whom you’ll recall were in the building that Kuvira and her Iron Giant mecha blew up at the end of last week’s episode. Well, Our Heroes plus Bataar Jr., fiancé of Kuvira, who’s finally realized that She’s Just Not That Into You.

Later on in the ep, Su is very supportive of her son, referring to Kuvira as a “complicated woman” and not a “raging psychopathic Hitler.” She also insists that Bataar Jr.’s siblings will come to forgive him for turning on the family.

Probably. Maybe. Dunno if I’d count on Opal, Secret Slytherin, getting there for a while, though.

With Asami and Varrick’s flying mechas now under several tons of rubble, Team Avatar has approximately diddly squat to use in their fight against Kuvira. To make things even worse, Prince Wu is with the group of citizens who didn’t have time to evacuate the city; if Kuvira finds out he’s there, she’ll have a relatively easy time of swooping in and capturing the only person with a legit claim to the Earth Kingdom throne.

But Wu won’t make it easy for her. After last episode, where he displayed a talent for leadership, Wu’s taken several levels in badass. He reveals to his fellow evacuees, stranded in the city after Kuvira destroyed the train tracks, that he has a connection with Badger Moles—which are, after all, the Earth Kingdom’s patron animal. Using his (franky awful) singing, he calls a pair of them forth and gets them to dig an escape tunnel. At one point they’re discovered by Kuvira’s soldiers, but the badger moles go into attack mode and protect their sovereign.

OH BADGER MOLES, I LOVE YA, I LOVE YA
I WANNA PET YOUR
SNOOOOOOOOUTS

Team Avatar is also getting their shit together. Back at Asami’s office, Asami, Varrick and Zhu Li are working on getting a pair of hummingbird mecha prototypes up and running. To buy them some time, everyone else comes together to attack the Iron Giant. They do pretty well considering their lack of resources and the fact that the IG is made of platinum, making it un-metalbend-able. The airbenders use balloons filled with paint to obscure its vision, Bolin lavabends under it and then attempts a Battle of Hoth AT-AT tripwire maneuver, and Korra just blasts the damn thing. The Iron Giant starts firing indiscriminately into buildings—shit’s getting Snyder-y!—and Korra eventually orders a retreat back to Asami’s office.

Meanwhile, Varrick’s figured out that he might be able to use an EMP to take out the Iron Giant, a larger-scale redo of the method he used back in “Reunion.” He’s less than successful: the smaller mechas go offline, but the biggun is still trucking along, powered as it is by spirit energy instead of electricity. At one point, it looks like Varrick’s trying the last night on Earth maneuver on Zhu Li (“Lately, I’ve been thinking about you. I know we might not make it out of this mess …”), but instead he just ends up comparing her to an ostrich horse.

Later on, Varrick gets his shit together and proposes to Zhu Li, asking her if she’ll “do the thing for the rest of her life.” She accepts, and even though she deserves better, I am happy for her.

At this point, it’s looking like the Iron Giant is pretty much unbeatable. But wait. Who’s this? 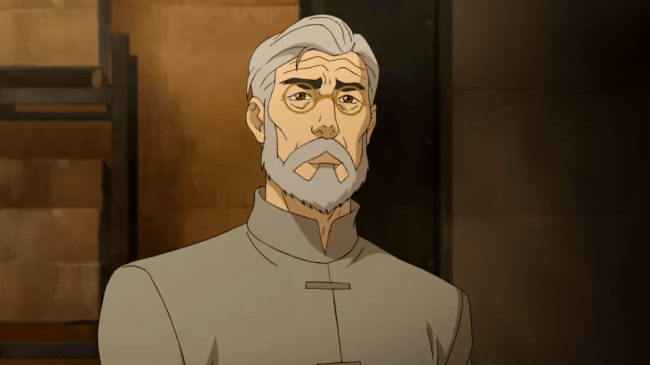 It’s Asami’s dad Hiroshi Sato, busted out of prison by Lin so he can help the cause!

Korra, Mako, Bolin, Su, Lin and the airbenders run interference on the Iron Giant—Meelo deploying quite a nice QUIT HITTING YOURSELF, QUIT HITTING YOURSELF routine—while Hiroshi, Asami, Varrick, and Zhu Li pilot a pair of flying mechas outfitted with fancy saws. Varrick and Zhu Li’s mecha gets damaged, so they have to pull a Wedge Antilles and nope out of there. Hiroshi and Asami, piloting the other mecha, manage to cut a hole in the Iron Giant’s armor (per Hiroshi’s suggestion), setting us up for Korra, Mako, Bolin, Lin and Su squirreling around inside the mecha during the season finale. However, Hiroshi is killed in the process; he activates Asami’s ejector seat right before Kuvira smashes their mech. So this is why he was abruptly brought back into the narrative a few episodes ago: to make a heroic sacrifice in the lead-up to the finale. Cool, cool. 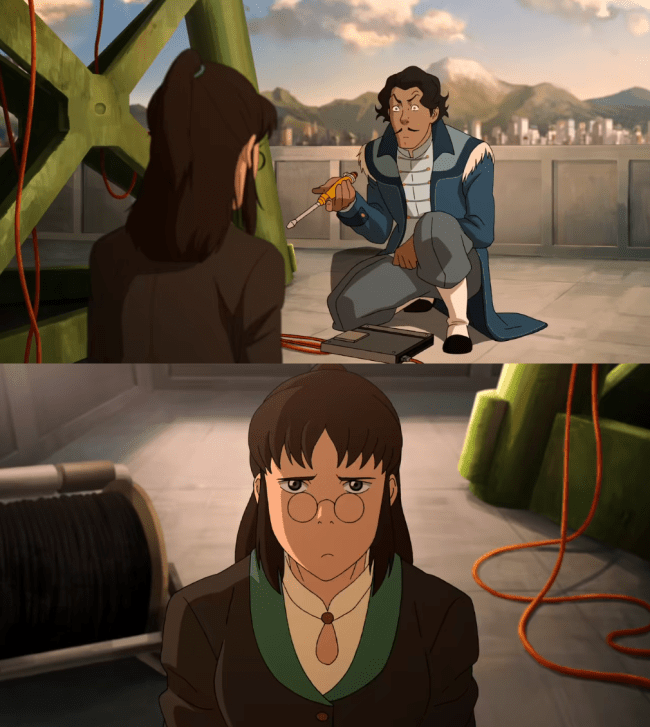