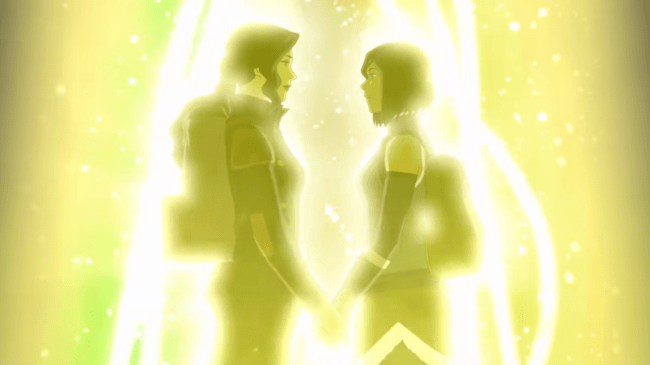 This particular series finale is called “The Last Stand,” and I have to admit, I felt a frisson of fear that I’d start the episode and see this:

But I didn’t. Yaaaaaaay.

As finales go, this one’s pretty good, if not anything world-shatteringly amazing (hey, ATLA). There are no ~*~big plot twists~*~. The characters that need to fight fight, and we get a nice little coda at the end where we people get to be nice and happy, and then everyone’s bisexual.

H’okay, so. After last week’s episode, Korra, Mako, Bolin, Su, and Lin are all inside Iron Giant with the goal of deactivating it before Kuvira can blow more shit up. Bolin and Mako go to the engine room to shut off the big-ass vine generator, while Su and Lin are on cannon disabling duty and Korra heads to the command center to fight Kuvira ~*~one last tiiiiiiime~*~. 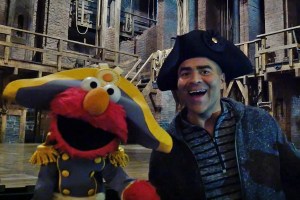 This picture is of Christopher Jackson, who plays Washington in Hamilton, with Elmo. Just in case you hadn’t seen it before.

Before the team splits up, Su helpfully asks Korra if she’s suuuure about squaring up against Kuvira, because she kind of sucked at it last time. JUST MAKING SURE YOU REMEMBER.

I mean. It is not inaccurate.

Fighting commences! Bolin deals with a guard in the engine room using lava discs that look a helluva lot like what he used in pro-bending. It’s a cute little throwback. By the time he and Mako get to the levers they need to switch off the IG, Kuvira’s already done some sort of override thing, so it doesn’t work. Mako, whose broody, noble self has been working up to a heroic sacrifice THIS ENTIRE SHOW, insists that he stay behind and just zap the fucking vines with lightning until they blow up.

The vines are like FUCK YOU, NO, and shoot lightning back at him. Mako, Mako, Mako. DON’T YOU KNOW WHAT HAPPENS WHEN A TOAD GETS STRUCK BY LIGHTNING? Anyway, Mako gets a good slow-mo hair moment out of it, but he does not die, because Bolin (who doesn’t get a slo-mo hair moment) comes back to save him. I am pleased about this. Season one me is shocked.

Back in cannon central, Su and Lin use sisterly teamwork (and metalbending) to unplug the spirit nuke, essentially. So Kuvira just straight-up rips her arm off. Not her real arm. Her Iron Giant metal arm, with the (now-useless) cannon on it. But still. It’s metal as hell.

While all this is going on, Korra and Kuvira are busy wailing on each other. The Iron Giant breaks in half (thanks, Mako), ending the Earth Empire’s campaign against Republic City and getting the IG Destruction Squad to (a bit dinged up) safety. Korra and Kuvira, who now find themselves in the spirit wilds, have the following exchange:

Basically, Korra tells Kuvira to give up, FFS, you lost. Kuvira refuses and instead finds the Iron Giant’s still fully armed and operational cannon. Having gone full into bugfuckville, she swings it up on some vines and starts blasting whatever she can get in her sights. The whole apparatus goes haywire and starts firing willy-nilly, and it looks like Kuvira’s about to be roasted, only Korra steps in front of her and uses her magical Avatar mojo to deflect the blast. The resulting explosion is so powerful that it opens another spirit portal. Hi, spirit portal! 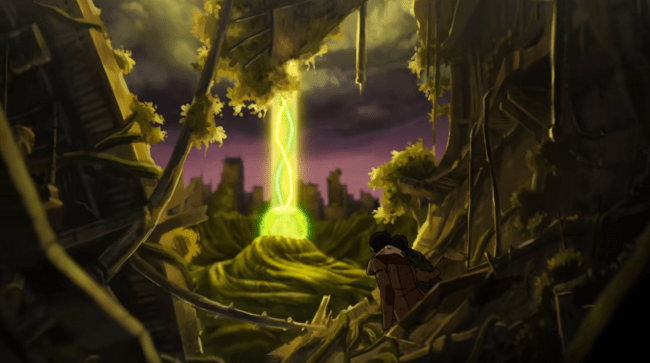 Kuvira and Korra, having been blasted into the spirit world, have A Moment. Basically, Korra says, they’re the same: They’re both determined to protect the people and things they care about, only Kuvira got way wild and violent with it. (It’s a personal failing that Korra, given her past, is not exactly unfamiliar with.) Kuvira finally admits defeat, ordering her mecha army to stand down, apologizing to Su, and offering herself up to the Republic City police.

Man. So everything is wrapped up, and there’s still like seven minutes left. Are Korra and Asami going to make out for all of them or …?

Instead, we get Varrick and Zhu Li’s wedding, which I would say was put together way, way fast, except I know Zhu Li has had all the preparations handled for months. Varrick wears some bangin’ pantaloons, and Bolin speechifies about the newlyweds’ “wondrous and, at times, inexplicable bond.” YEAH, THAT’S ABOUT RIGHT. Varrick being the one to lose 100% of his shit and start bawling is delightful.

We have (most of) the obligatory send-offs, minus one final Korra-Bolin bonding sesh that WE DO NOT GET. Wu tells Mako and Korra that he plans to dissolve the Earth Kingdom’s monarchy and try one of those democracy things.

Korra and Tenzin have one final pep talk, in which Korra tells Tenzin she had to go through all sorts of angst so that she could be compassionate towards Kuvira, and Tenzin tells Korra he’s glad she’s not such a depressive sadsack anymore.

Finally, Korra sits down for a chat with Asami. A nervous-looking Korra apologizes for fucking off for so many years, and Asami responds that, s’alright, she’s just glad Korra’s alive, because she couldn’t have handled losing her dad and Korra in one day. You know, because she loooooooves her. Then they go off together to explore the spirit world, Korra ending with a shot of the two of them that parallels the shot of an all partnered-up Aang and Katara at the end of Avatar.

Afterwards, they run into Zuko, who went through a spirit portal as soon as the Kuvira shit died down so that he could catch up with Iroh over some tea. Shhh. I have decided. It happens. Zuko and Iroh reuniting after all those years makes my heart hurt, which is how I totally know it’s something Zuko did.

All in all, this finale is … good—not as good as ATLA. Not, like, 25% of even approaching that level. I haven’t mentioned it up to this point, but the computer-type animation with things like crowds of mechas looks janky as all shit. Korra, your low budget is showing. Tim Gunn would tell you to make it work, and so will I. And, while “The Last Stand” was entertaining, it didn’t pack anything approaching the emotional wallop “Sozin’s Comet” did. It’s a villain problem, i.e. I don’t particularly care about them in Korra. In Avatar, we spent time with Azula and Ozai over the course of several seasons, getting to know them and—even more critical—how they related on an emotional level to Aang and Zuko. The Zuko-Azula duel was so amazing because it was the culmination of a conflict that had been brewing, in the world of the show, for years. Korra‘s writers attempt to do something similar here, presenting the final Korra-Kuvira duel as Korra being up against herself as she could have been. But, though the action choreography is cool, on a deeper level it’s a shrugger for me, because I just don’t care about Kuvira.

Every major villain in this show has been a not-too-veiled cipher that serves more to prompt Korra’s character development than as a well-rounded character in their own right. Some of them were cool (Unalaq was not cool), but I wasn’t interested in any of them as people, really. Azula broke my fucking heart. Ozai was scarier than all of of Korra’s wannabe demagogues combined, not because he wanted to conquer the world, but because we saw him be an abusive father to Zuko. (I will admit that Zhao was a little shit. But everything was sillier in ATLA season one.)

Amao, Unalaq, Libertarian Henry Rollins, Kuvira … I mean, OK. Sure. In Korra, the only villains I had a really strong emotional reaction to were the more minor ones who had an ounce of personality to them instead of just being Lessons In How Not to Act. They were fun. Lava Guy and Water Girl. Season two Varrick. Eska and Desna, back when they had murder on their minds.

That said, the villains of Kuvira weren’t really the point. Though I wish Team Avatar had been together more often, and I’d chop off a limb to get some Fire Nation stuff, Korra was still pretty good! I’ll leave you with one final MVP screencap, titled “Lin/Kebab OTP.” 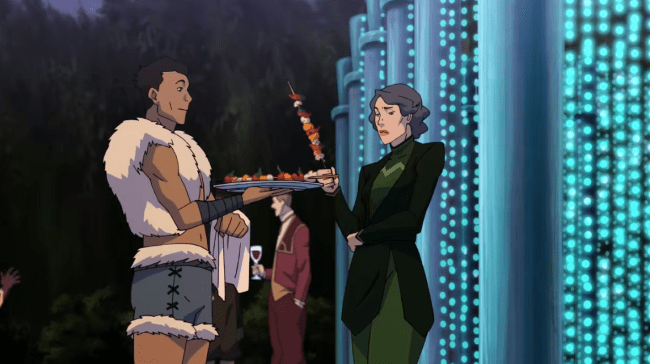