The Legend of Korra Newbie Recap S4E11 | The Mary Sue 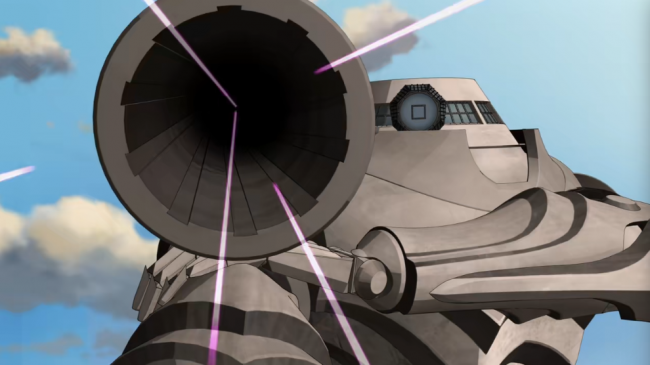 So now that Kuvira has conquered the Earth Empire and successfully built her vine-powered nuke (never thought I’d type that phrase), is she going to sit back and get with the chilling, secure in the knowledge that she’s done all the conquering she needs to?

Turns out (we knew this before, but it’s been a while since it’s been brought up), Republic City was built on land that used to belong to the Earth Kingdom before Aang and Zuko got all grabby with it, and Kuvira’s well and damn determined to get it back. After that it’ll be “Yo, Water Nation, an Earthbender was in you one time, so boom, ANNEXED. Hey, Fire Nation, you know what you’re built on? EARTH. GIMME GIMME GIMME.”

Back in Republic City, Wu’s planned evacuation isn’t going so well, because it’s only a voluntary evacuation, and no one’s convinced that there’s immediate danger. In a case of relevant timing, the members of “Operation Beifong” bust in all DID SOMEONE SAY SOMETHING ABOUT IMMEDIATE DANGER. KUVIRA’S GOING TO ATTACK IN TWO WEEKS, JUST FYI. So now the voluntary evacuation is mandatory; Wu (who’s actually a pretty good leader … who knew …?), with the assistance of Pema, is going to try to get everyone out via train ASAP, so that the rail line (presumably how Kuvira’s bringing her big-ass cannon into the city) can be cut before her arrival.

Varrick (who’s been working on flying mechas with Asami) has a big, emotional reunion with Zhu Li that’s … well, it’s more big and emotional on her part, really. She explains that she didn’t mean any of the (100% true) horrible things she said about him, and she only joined Kuvira in order to save him in the long run. Varrick, emotionally oblivious to the nth degree, is very YEAH OK I FORGIVE YOU, GET BACK TO WORK. Zhu Li blows a gasket and insists that, if she’s going to come back and work for him, it’s going to be as a partner, not an equal. Tell him, girl!

(But also, she deserves better. I don’t think Varrick is capable of not being a narcissistic asshole. But clearly, she knows his flaws, and she’s an adult woman who can make up her own mind about who she wants to associate with. TL;DR I am completely OK with their continued partnership as long as she, like, sprays him with a water bottle every time he gets too far up his own ass. They are the Tony and Pepper Potts of the ATLAverse.)

Korra decides that she, Mako, Bolin, and Asami are going to meet Kuvira’s army en route and take out the cannon before it has a chance to reach the city. A risky move, sure, but at least then it’ll be Republic City’s army (mostly General Iroh’s fleet of ships, and oh hey, you’re back, General Iroh! Ish.) vs Kuvira’s army, and not Republic City’s army vs Kuvira’s army AND A BIG-ASS NUKE. Korra’s thinking tactically, guys! Only it turns out that Kuvira, being an actual smart person, realizes that Zhu Li must have blabbed about the two-week plan, so she moved the invasion forward to one week, i.e. Literally A Few Hours From Now.

Also, the cannon’s not on a train.

It’s on the Iron Giant. 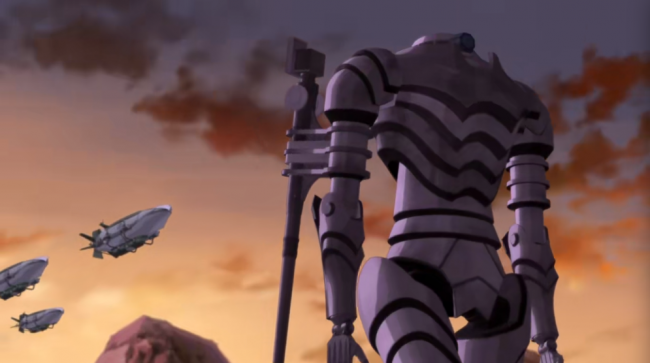 Korra, Bolin, Mako, and Asami spot Kuvira’s army and the giant mech (which Kuvira drives from the control room inside its head), and instead of trying to take it out, they scurry back to Republic City all SHIT SHIT SHIT HOLY SHIT to warn everyone that Kuvira’s army will be there in oh wait it’s here now. Raiko does this half-assed “Leave our city now. I’m a tough guy. Rawr?” move, but then Kuvira’s all LOL NO and blows several of General Iroh’s ships to shit. Raiko surrenders, which is … pretty reasonable, actually. Not particularly Korra’s style, but. Surrendering doesn’t necessarily mean you have to stay surrendered, after all. And, sure, there are civilians still in the city, but double-dog daring Kuvira to come at him, bro, will probably lead to more death than the alternative, at least in the short term.

A condition of Raiko’s surrender is that Korra be handed over to Kuvira. Not so much of a fan of that part of the arrangement, Korra hies off to Asami’s factory, where the good guys have a confab about how in the hell they can take down Nukeyson McMurderBot. The verdict is that they should kidnap Bataar Jr., since, as the guy who built the mech, he should be able to tell them how to take it down. The abduction goes pretty smoothly, except that Kuvira finds out about it almost right away, as Bataar Jr. doesn’t keep his scheduled appointment to negotiate a surrender with Raiko.

Korra and Su both try to get Bataar Jr. to break, but neither of them are successful. Bataar Jr. has drunk too deeply of Kuvira’s ideological Kool-Aid to listen to his mother about how evil his lady love is, and Bataar Jr. knows full well that Korra won’t actually torture any intel out of him. Korra, however, has another idea: She won’t hurt Bataar Jr., but unless he convinces Kuvira to back off, she’ll make sure that the two conquer-happy lovebirds never see each other again. Bataar Jr., being a complete and utter softie, folds. He rings Kuvira up and begs her to go back to the Earth Empire with him; they can live happily having only conquered a quarter of the world. “The only thing that matters is that we’re together!”

Thing is, we saw from a brief interaction between Kuvira and Bataar Jr. earlier this episode—where they talk about how, after she’s conquered Republic City, they can get married—that she really does care for him. She’s not faking it. He’s not just some political pawn he married because of good connections and an affinity for building murderbots. She loves him. She just loves power more. Sorry, Bataar Jr. Gonna triangulate your position and use the Iron Giant you created to blow up the factory now. We can discuss this later on? If you don’t die?

Not that he does die. I mean, we end the episode with Kuvira blowing up the factory that Bataar Jr., Korra, Asami, and pretty much all the good guys are in, but with only two episodes to go, I’m fairly confident in saying no one bit the dust off-screen. We’re building up to bigger things. Of more importance is the fact that all of Asami and Varrick’s tiny, flying mechas that they were going to use to combat Kuvira’s forces are now … a lot more tiny. And not so much with the flying. Or the mechas. In fact, “rubble” is the term I would use. 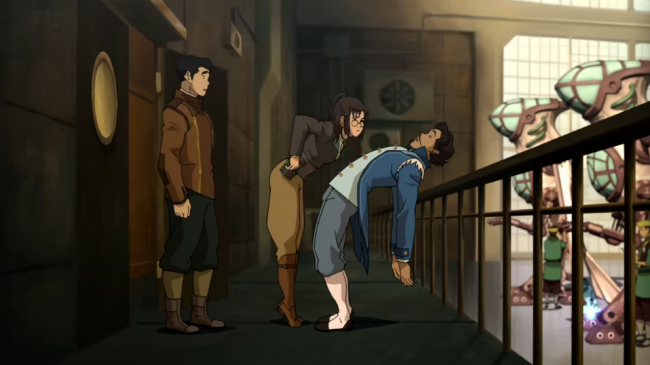