The Legend of Korra Newbie Recap S4E10 | The Mary Sue 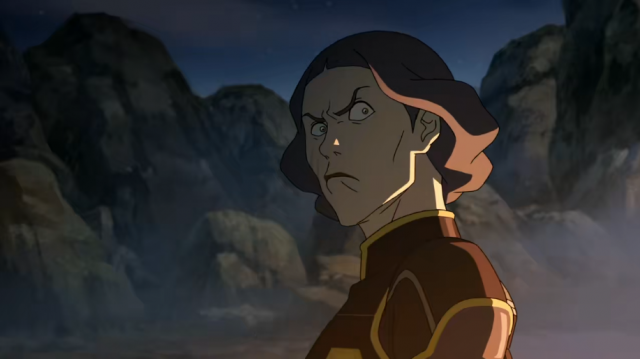 AKA “The Beifongs Are Here to Wreck Your Life.”

At the end of last week’s episode, Lin, Opal, and Bolin jetted off to Zaofu to rescue the remaining Beifongs (minus Bataar Jr., yoked to Kuvira’s homicidal star) from the clutches of the enemy. At the top of “Operation Beifong,” they’re joined by Toph. Her daughter’s being held captive, so she’ll come out of retirement and help, she guesses.

I can’t decide whose reaction to Toph’s reappearance I like more: Bolin’s … 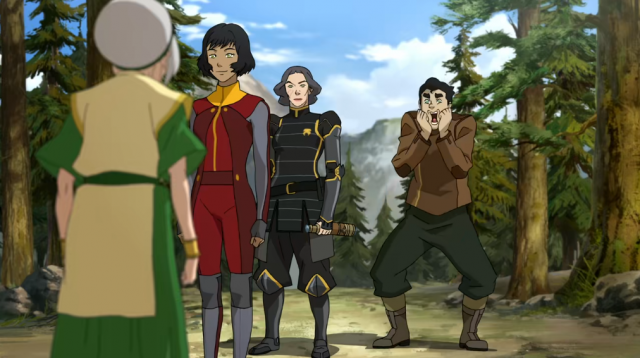 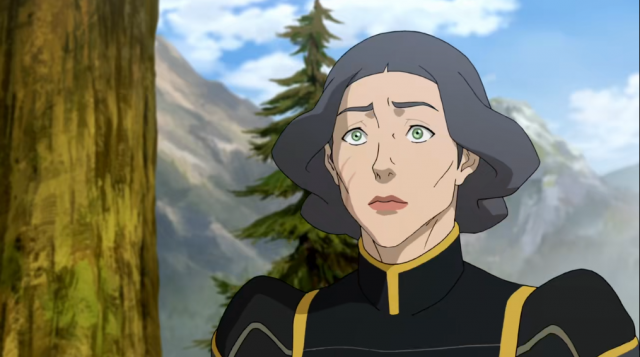 Of course, to make up for her momentary lack of RAAAAAGE, Lin spends pretty much the entire rest of the episode sniping at good ol’ Ma. And for some good reasons, too: Toph did fuck out of her family’s lives for 20 years, and she’s almost as good at pissing people off as she is at metalbending. Toph’s advice that her should daughter put her big girl panties on and get the fuck over her resentment issues is… tactlessly put, if accurate. Lin’s not allowed to talk shit about Korra’s teenage angstfests ever, ever, ever.

Also, another reason Lin’s pissed at her mom is that Lin never knew her dad, who (it seems?) was just Some Dude whom Toph had a short-lived relationship with, but it didn’t work out, so he left. NBD, it happens. I know nothing about this dude or his situation, so I can’t lay down any sort of judgement on why he wasn’t around. But on Toph’s part:

Toph Beifong will not be slutshamed!

Anyway, back to the plot at hand. Toph has found out that Su and the rest have been taken to Kuvira’s re-education camp. Bolin knows where the camp is, because of the Used to Be Kuvira’s #1 Muffin thing, so they set out on phase two of their rescue operation. The camp, as it happens, doubles as the factory where Bataar Jr. and Zhu Li are doing their damndest to recreate Varrick’s spirit vine-powered WMD. Only that’s not going so well, and the weapon’s big test is tomorrow. Zhu Li assures Kuvira that she’s doing everything she can to fix the weapon, and it will absolutely be done in time, yessirree.

But wait! Plot twist! Toph, who has been watching the whole scene off yonder, can tell that Zhu Li’s lying. (“Toph, you’re a truth seer?” “What, like it’s hard?”) Which means that Zhu Li totally is punking Zhu Li. Bolin’s face is my face: 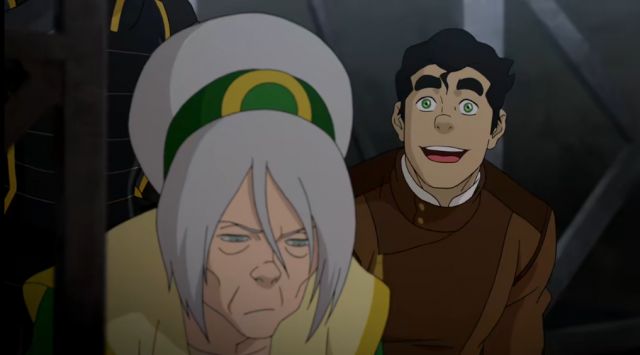 Man, Zhu Li is the greatest, isn’t she? “Hmmm. Metalbending Hitler is trying to make a nuke so she can take over the world. K. Guess I’ll infiltrate her science division and sabotage her pet project right under her nose, all by myself, with virtually no chance of rescue should I get caught. Which I very well might be, because it’s not like I have any spy experience. [Maybe? I feel like Zhu Li’s done everything.] YOLO.”

Opal and Bolin want to add a side task onto their rescue mission—taking down Kuvira and destroying the weapon, respectively—but Toph points out that, frankly, she couldn’t give a shit, and getting her family out safely is the #1 priority here. The next day, the team takes advantage of everybody being at the weapons test to break Su, Bataar Sr., Skrillex, and the twins Thing One and Thing Two out of their suspended prison using some pretty sweet Tarzan action.

Bad thing one: A guard catches them in action and sounds the alarm.

Bad thing two: Yeah, Kuvira totally discovers that Zhu Li sabotaged the weapon by removing a crucial component right before the test. As punishment, a wonderfully defiant (“You’re a monster. I regret nothing.”) Zhu Li is tied up in the abandoned village that Kuvira is using as a target for her now fully armed and operational nuke. Bolin and Opal, seeing this, go off to rescue her. Toph thinks everyone is stupid.

Bataar Jr. realizes that his little sister is in the test city and tries to get Kuvira, y’know, not blow her up, but she refuses. Future in-laws, amirite? However, disaster is averted when Su, Lin, and the twins fling rocks at the cannon, throwing its blast off-target. Su, determined to destroy the weapon, squares up against Kuvira, but it… doesn’t go so well. The only reason everyone survives is that Toph decides, ugh, she’ll step in and save these boneheads if she must.

The Beifong family, plus Bolin and Zhu Li, minus that asshole Bataar Jr. (who miiiiight be feeling some strain with Kuvira in the future) sail back off to Republic City on Opal’s air bison. A big dramatic moment between Opal and Bolin—he’s out of the doghouse, awwwww—is interrupted by Zhu Li informing everyone that Kuvira plans to attack Republic City in two weeks, just FYI.

And now for the b plot! President Raiko wants Varrick and Asami to cook up some spirit nukes for his very own self, but the scientists refuse. As an alternative, Korra offers to go to the spirit world and ask the spirits if they pretty please wouldn’t help the humans fight Kuvira. After all, Kuvira’s involved in spirit vine shenanigans that don’t exactly endear her to the spirit population. However, the spirits pull a Switzerland, arguing that they’ve never gotten involved in Human Shit (not willingly, anway; Unalaq forced them), and they’re not about to start now. More than that, the spirits have begun abandoning the city in advance of the pending avalanche of shit that’s rolling the good guys’ way. Wu, offering pretty much the only good idea he’s had up to this point, suggests that humans GTFO out Republic City, too. (His moment of civic responsibility comes because he wants to look impressive so he can get into Korra’s pants. Of course.)

Three more episodes left! Will Team Avatar be in the same place for a span of longer than ten minutes? Will Zhu Li put Varrick in a headlock and give him a noogie? Several noogies? Are we going to see Izumi, General Iroh, or Zuko ever again? Do the showrunners remember the Fire Nation exists? Check back next week, when there will be more cursing.

It’s a toss-up. Unimpressed Opal is my life, my love, my heart, but I can’t not with the other one, either. 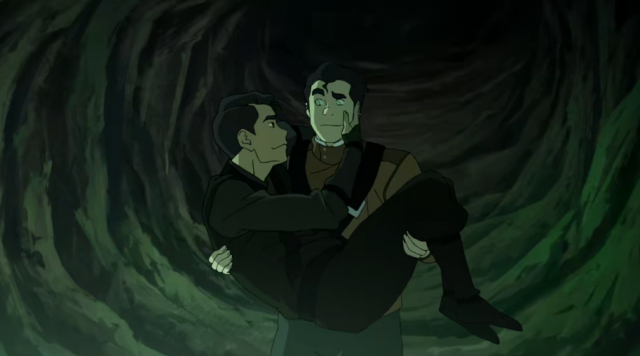 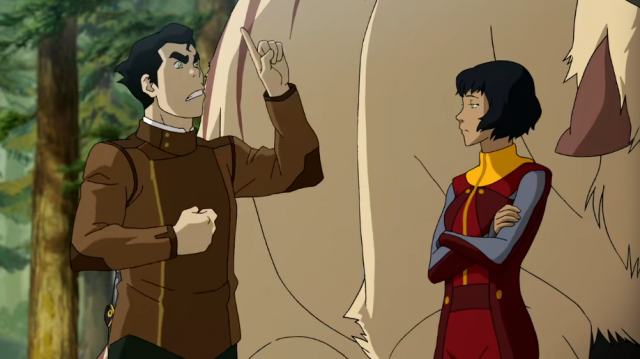