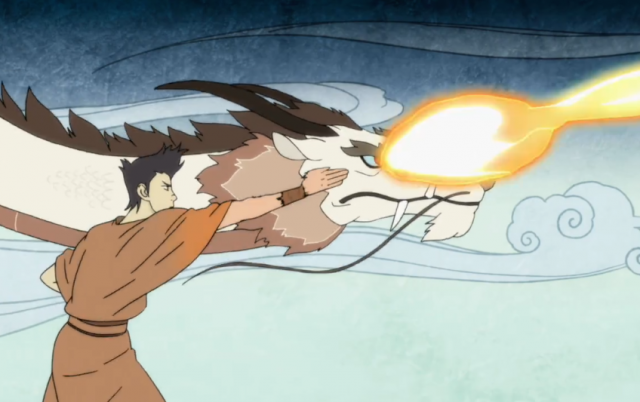 I needed a break from Bullshit Love Triangle Island after last week. Good.

This Mako-less episode is the first in a two-part flashback to how the very first Avatar came to be, which is pretty cool to show fans. We start with an amnesiafied Korra being carted away to a Shaman, who helpfully notes that she’s been infected by dark energy and needs to take a dunk in a healing water cave so she can get all the evil expunged before it puts the kibosh on her Avatar-ness. The water sends her into the spirit realm, where she encouters the spirits of former Avatars. As per usual, Roku is wise-sounding but too vague to be really useful (“Regain connection with the Avatar spirit you must, yesssss!”), and Kyoshi’s metal as hell (“BTW, if you don’t pull this off, you die and everyone’s fucked.”)

Korra has to find the mysterious “Rava,” which she will do with the assistance of Wan, the spirit of the first Avatar. He is voiced by Steven Yeun and is thus UNSTOPPABLE.

Off to the flashback. Things to know about Wan:

1) He lives in a city that’s perched on the shell of the big-ass turtle from The Neverending Story.
2) He has two bros: Little friend bro and half a tree bro.
3) The city he lives in is ruled over by the Chou family, which hoards food like a motherfucker while everyone else starves.
4) He is, essentially, Aladdin. Riff raff, street rat, stealing food, the whole nine yards. Oh, and
5) Anime hair 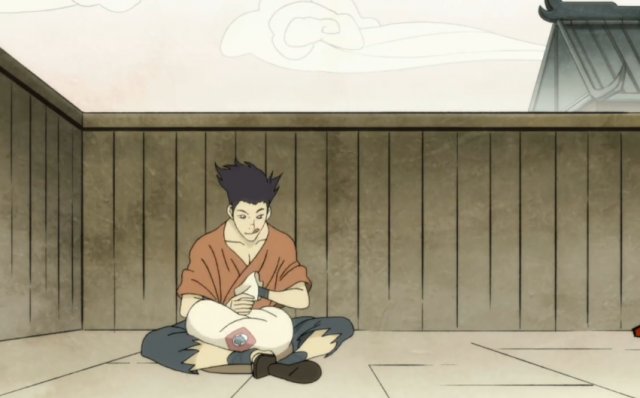 Wan is determined to break into the Chou’s food cellar, which little friend bro objects to, because it will get him killed… or worse… EXPELLED. Expelled from the city, that is, into the woods where the scary spirits live. Wan, however, is determined to topple the 1%. He volunteers to join a hunting party led by Beardo 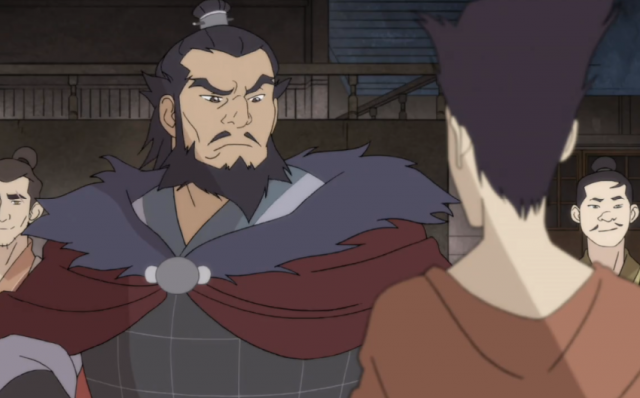 …which, because it’s so scary in the forest, requires that Morla the Aged One gift them all with the ability of firebending. Wan’s supposed to give the fire back after, but of course he comes up with a ruse to keep it instead. Because stealing fire worked so well for Prometheus, Wan! He and his friends don masks and, armed with Wan’s firebending, attack the Chou’s food stores. Guards fight back, and Wan punks out on killing a dude at the last moment.

Captured, Wan’s escorted back to Morla, where he’s banished from the city but is allowed to keep his bending so the spirits in the forest won’t kill the fuck out of him. Things don’t go well that first night, with all the spirits conspiring to make his life a living hell. Design-wise, it’s very Miyazaki. 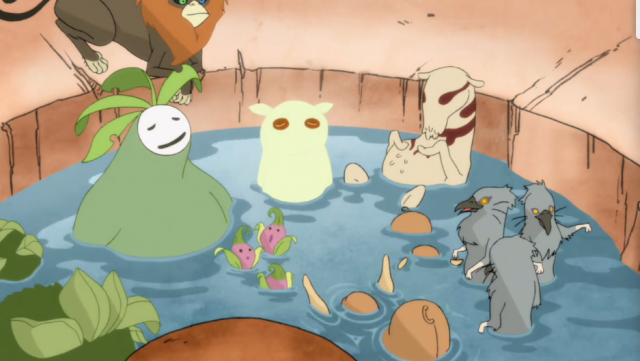 Wan’s #1 enemy is a lemur spirit (MOMO, NO!), who tells Wan that all humans are “ugly, destrutive and lacking respect for nature.” Wan’s “I am water, you are glue” retort is very mature.

The lemur lets slip that there are other cities on the backs of other giant turtles, but he refuses to tell Wan where they are, because he’s a bit of a petty dick. In the process of wandering around looking for another city, Wan comes across a trapped cougar deer thing, which he decides to rescue because dammit, he’s a cat person. Unfortunately, the cougar deer had been captured by Beardo and his friends, who very much wanted to eat it. There’s a fight, with Wan using firebending and his now-superior knowledge of the forest to get a leg up. Lemur dude lends a hand (paw?), possessing one of the hunters for a brief time and turning him into a freaky lemur-mutant hybrid. If he’d stayed in the human longer he could have killed him… “WHICH I DID CONSIDER.”

I like lemur dude more than a good three quarters of the characters from “The Sting.”

The spirits, now convinced Wan is one of the Good Ones, heal him, feed him and train him in the ways of firebending. He’s their pet human now, essentially. And he even gets to play with a dragon! Millennia in the future, Zuko sheds a single tear.

Back in the village, Beardo tells the villagers about how Wan, despite living in the forest, is very much not dead. The 99%, encouraged by the success of one of their own, peace out of the city, picking up some firebending from Morla on the way. And that, one assumes, is how the Fire Nation began.

Wan, having gone through a Zuko-esque hair evolution (hairvolution?) of his very own, decides to leave, too, and finally hunt down those other cities. At his side is the trusty cougar deer, the (eventual) Avatar’s first animal BFF. In Wan’s travels, he comes across two spirits locked in MORTAL KOMBAT! The male spirit begs Wan to free him, telling him that the female spirit has tormented him for ten thousand years. Marriage, amirite?!

Despite the other spirit’s admonishments to not get involved in their shit, Wan intercedes and helps the male spirit escape. Which, it turns out, is a giant fuck-up, because the male spirit was Vaatu, the force of darkness. The other spirit, Raava (the one Korra’s supposed to find), is the force of light and goodness, and she’d been keeping Vaatu in check for thousands of years until SOMEONE (*cough cough*) came along and fucked it up like the giant knucklehead dipshit he is. So now chaos is unleashed on the human and spirit worlds, and it’s all Wan’s fault. Whoops?

General thoughts on this episode: It was… good? I enjoyed it. I mean, I’m missing some Varrick, and things were never super interesting, but I imagine the second part of “Beginnings” is where shit really starts to happen. And anyway, holy amazing music and design, Batman: 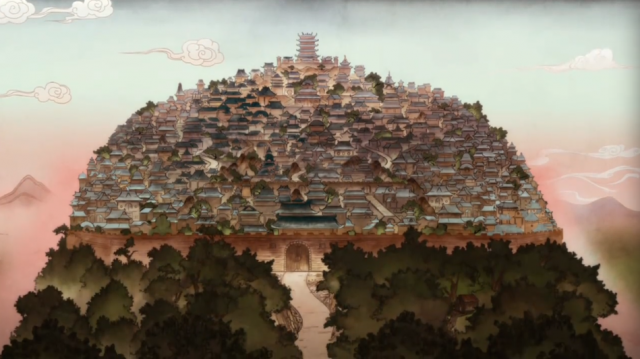 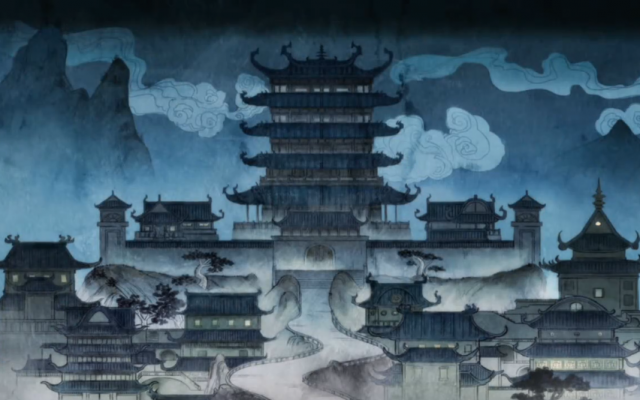 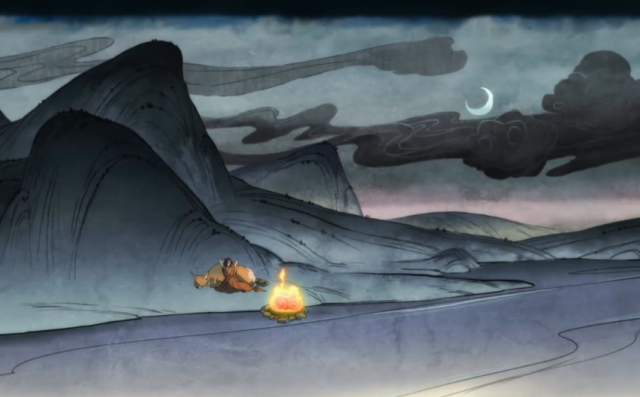 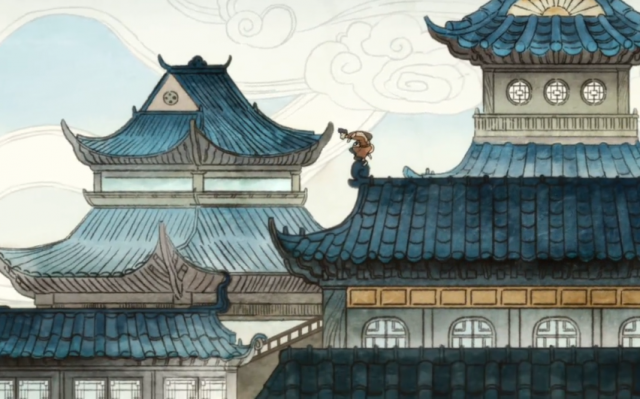 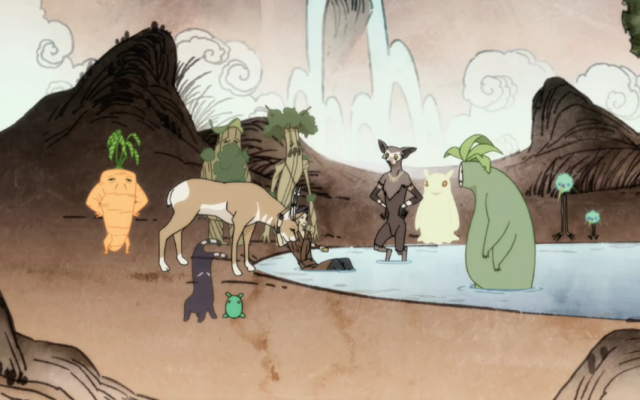 Hold the fuck up, IS THAT A BEEFY CARROT?! 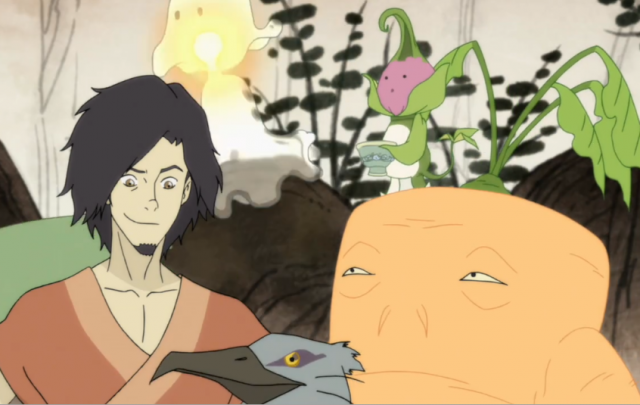 Where did the spirit get a teacup?