The Legend of Korra Newbie Recap: “The Sting”

In which everyone is their dumbest self. 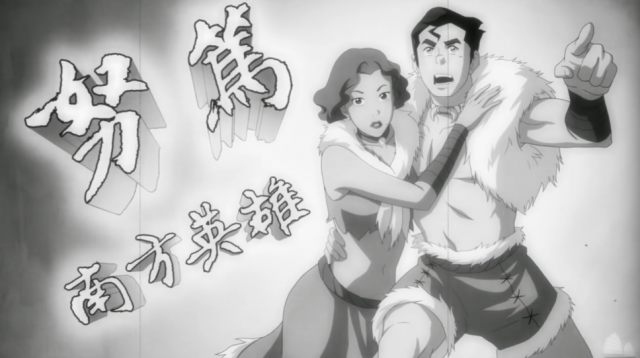 Hey, you know what? I think I shouldn’t recap this episode. I want to watch Ukraine’s 2007 Eurovision performance on an infinite loop, instead.

Oh, fine. “The Sting”’s first disappointment: It did not feature a voice cameo from Robert Redford. What the what, Nickelodeon?! You got Serena Williams for Avatar!

Shit continues to be bad: One of Varrick’s ships, en route to the Southern Water Tribe to sell Asami’s mini-Jaegers, is attacked by the same people who blew up the Southern Water Tribe’s cultural center last episode. That leaves Future Industries nearly bankrupt in addition to spelling bad news for the southerners, who continue to be severely outmanned and outgunned.

Meanwhile, Unalaq continues to engage in shady behavior; this time around, we learn he’s been hanging out in the Spirit World, which rightly makes his kids (who think Korra’s dead, BTW) suspicious. It wouldn’t be an episode in the ATLAverse without a minor developing a burgeoning crisis about whether to follow in their father’s morally dubious footsteps.

From there, we skip to an honest-to-God three-minute segment of the propaganda film Bolin made with Varrick. It’s cute, and I like that he has a theme song, but ….. ????? These are only 23-minute episodes, people. You’re telling me that, without Korra (who’s barely in this episode), you can’t fill out 23 minutes?

Meanwhile, Mako’s brooding over his breakup with Korra when Asami walks in, upset about her hijacked weaponry.

Getting this out of the way: We go back into LoveTriangleville this episode. I think you can guess my thoughts on that, but just in case, here, have some gifs:

Lin Beifong and Korra’s versions of Hitchcock and Scully from Brooklyn Nine-Nine are determined the Northern Water Tribe is behind the ambush, even though there’s no actual evidence to that effect. This whole plotline—Intrepid cop Mako risks his reputation and his relationships to go AGAINST THE MAN and prove that THINGS ARE NOT ALWAYS AS THEY SEEM!—pisses me off. Because he’s right, of course. All the evidence points to someone other than the Northern Water Tribe being responsible for both attacks. But. Lin Beifong—who calls Mako’s theory “lame-brained, rookie ideas”—is the fucking Chief of Police. We know she’s smart and good at her job and doesn’t like to take the easy way out. So why are the writers trying to convince me that she’d be on Team Stupid, here? That she’d completely ignore the evidence?

It flies in the face of everything we’ve learned about her so far. It’s all manufactured drama for the sake of making Mako look like this cool, buck-the-system rogue cop, but without actually earning any of that. Which is extra insulting because—though I bitch and moan about him—he actually is a pretty cool, no-nonsense dude who does bad-ass things when the writers aren’t trying to push him down our throats as some sort of Zuko 2.0 (…Two-ko?). Work with the character you’ve got and let things grow organically from there, instead of trumping up some bullshit storyline where Crusader Special Snowflake Mako’s the only non-idiot in Republic City.

Anyway. With Lin having been replaced by her dumb-dumb doppelganger, it’s on Mako, Asami and Varrick to find out who really attacked Varrick’s ship. To do that, they set up a sting: Mako and Asami will go out in another one of Varrick’s ship to the approximate area where the earlier ambush happened. Then, they’ll capture the attackers. It’s exactly the same sort of dumb-as-shit plan that Mako (rightfully) criticized Korra for coming up with last episode, but whatever. The general idiocy on display here pales in comparison to the specific idiocy of hiring members of the Triple Threats as muscle. Let me repeat that: To help him out with his sting operation, which involves him going behind the back of his superior. Mako. A cop. Hires the mob. HE HIRES. THE MOB.

For payment, Asami will give them some fancy new Future Industries tech, which sounds like it might be illegal because it’s knowingly funneling resources directly to the mob, but what the fuck do I know? For Mako’s part, he tells them that Korra miiiiiiight restore the bending of one of their members. How was that going to work, in Mako’s head? Like, did he actually think that Korra might consent to restore the bending of a known criminal, or he did he expect that, when he told the Triple Threats he didn’t actually promise that she would, they’d give a fond headshake, chucking him on the chin and chortling “Good job on the semantics, kid!,” before taking him out for sorbet?

Everyone in this episode is fucking dumb.

Except Bolin, who used all his movie money to buy a giant statue of himself. That’s a sound investment, right there: 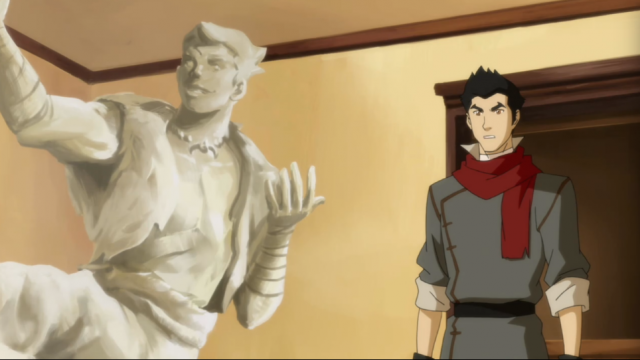 Actually, though. There’s something about Bolin in this episode that pisses me off. Earlier, we saw him come onto his co-star Ginger, who doesn’t like him in real life. (Ginger’s a lesbian, by the way. I mean, just because a woman’s not into a specific man doesn’t mean she’s a lesbian, but it is my headcanon that Ginger is.) She rebuffs him, but he doesn’t get it, citing the chemistry they have on-screen. Later, we see them shooting a scene together, and Bolin lays an unexpected smackeroo on her while they’re in-character. Bolin… don’t spring that on her. That’s weird. Don’t pretend you’re being Method. Chill. Talk it out with her first. Then Bolin renews his flirtation, and Ginger testily re-explains that “Ginger the person” is not the same as “Ginger the character,” and “Ginger the person” is not into him, so maybe he should back off.

I know that Bolin is not the smartest character on the show, but come the fuck on. You expect me to believe that he’s somehow confused about what acting is? He’s not that dumb. Look, I know this episode’s whole Bolin storyline is just lulzy bullshit meant to pad out the running time, but there’s this really weird vibe of “LOLOL, look at the manchild who doesn’t know when he’s been rejected by that frigid bitch woman. Isn’t he so cute?” And it just kind of rubs me the wrong way. Korra, you’re better than this.

The sting begins, and Mako admits to Asami that he broke up with Korra.

They don’t have time for a capital-T Talk, though, because Mako overhears the leader of the Triple Threats talking about how they’ve been paid off to distract Mako and Asami while something else goes down. Mako and Asami, completely shocked that they’ve been double-crossed BY THE MOB, escape in a boat. They manage to outrun the mobsters, but by the time they get back to Future Industries’ warehouse, all of Asami’s stock has already been stolen.

Asami’s despondent over what now must surely be the complete and utter destruction of her company, which is all that she had left of her family. Mako pulls a very heroic LIVE, DAMMIT! I WON’T GIVE UP ON YOU! speech. She kisses him, and they’re both awkward about it afterwards. Oh, we’re still fucking doing this, eh?

Mako visits Bolin on-set and discovers that the remote detonators used by the men who attacked the Southern Cultural Center and Varrick’s ships are the same ones Varrick uses for his films. Whoops. War profiteers be war profiteering. Mako makes a :| face. Actually, he’s made a few odd faces this episode: 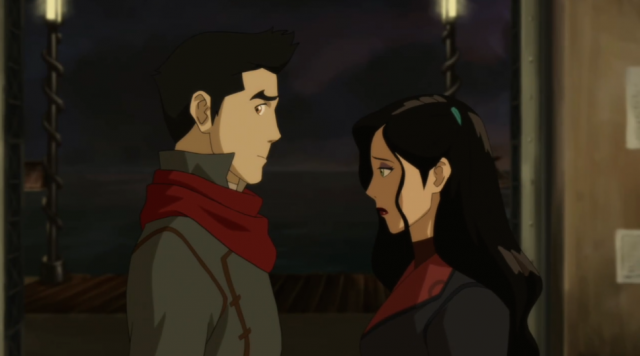 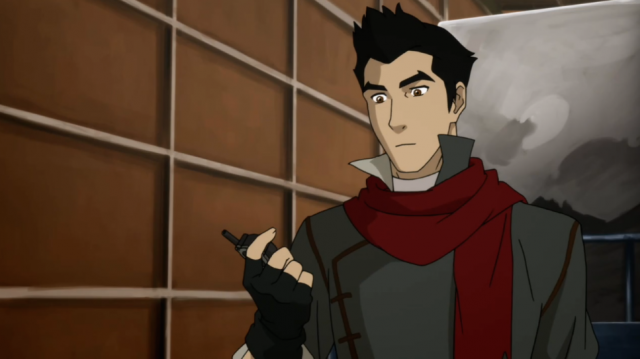 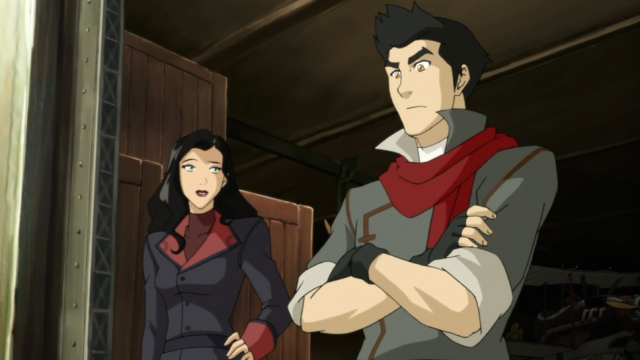 Mako goes to tell Asami about how Varrick was responsible for both attacks, only to find that she’s meeting with the man himself, who’s just bought a controlling interest in Future Corp, thus saving her company. JFC, that woman has shit luck with father figures. Mako very subtly tells Varrick that he knows who’s behind the attacks, and he’s close to proving it. Varrick, cementing his position as my favorite character in this episode, possibly the show, possibly ever, makes this face: 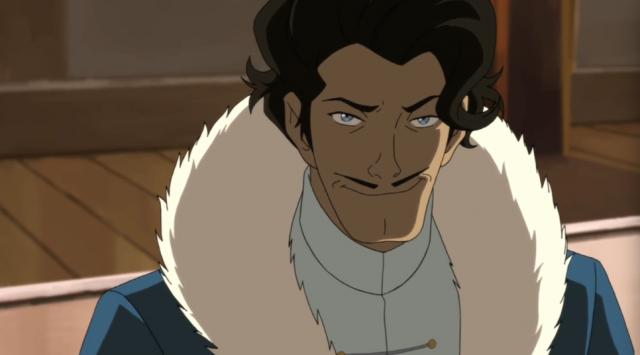 With 90 seconds left in the episode, we finally get some Korra. After her tussle with the angry spirit at the end of last episode—after which, it is implied by the some funky ocean texturing, she spent some time in the spirit world—she washes up on a beach… with amnesia.

Legend of Korra. This is some real soap opera shit. 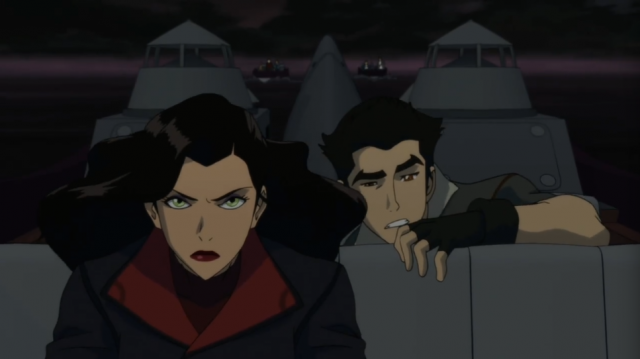 It’s OK, Asami. I didn’t like this episode, either.