Studio Ghibli Doc The Kingdom of Dreams And Madness Is A Total Delight. Watch It Right Now!

Brb, pretending to work for MIyazaki. 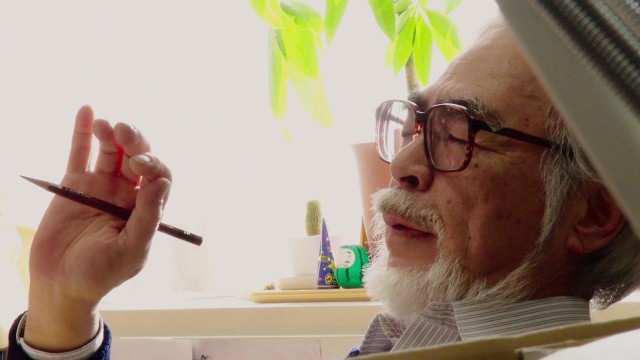 I always feel a little useless recommending Studio Ghibli movies because, well, duh. Everything Miyazaki touches is amazing, and the work speaks for itself so much that offering my two cents seems redundant. I’ll preface this review by saying that if you think a documentary about the inner workings of Studio Ghibli might appeal to you, stop wasting your time with me and start streaming The Kingdom of Dreams and Madness, stat.

Spanning one year inside Studio Ghibli, The Kingdom documents production on Princess Kaguya and The Wind Rises (likely the last feature Miyazaki will ever direct). Although the movie’s behind-the-scenes insight is fascinating, director Mami Sunada‘s relationship to Miyazaki and his team is what elevates the doc from a niche film for animation and Ghibli fans to a timeless reflection on post-Fukushima Japan and humanity’s compulsion to create.

It’s apparent from Miyazaki’s interactions with the camera that he considers Sunada a friend, and some of the movie’s best moments are when he decides to give her–and by extension, us–an understanding of his extremely private inner life, be it a glimpse at his anxieties left over from the war or his eternal dissatisfaction with filmmaking.

Although at times The Kingdom feels a little slow, dawdling too long over the shoulders of animators or on Ghibli’s extremely content live-in cats, Sunada earns that leisurely pace with an incredibly well-edited and revealing third act that highlights biographical elements in Miyazaki’s work. I won’t tell you which scene made me cry, but that’s okay. You’ll know it when you see it.

The Kingdom of Dreams and Madness is available on iTunes, Amazon Instant Video, Google Play, Playstation, Xbox, and Vudu starting today, as well as some select theaters. Now, get out of here and start watching!