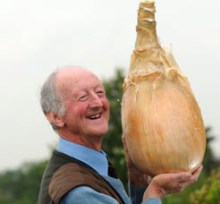 Peter Glazebrook already has several major accomplishments under his belt, namely as the grower of the world’s heaviest potato and parsnip, in addition to the world’s longest beetroot. Despite these outstanding credits to his ability as a gardner, for the past 25 years Glazebrook’s dream was to grow the world’s heaviest onion. This year he did just that, and presented his massive onion at the Harrogate Flower Show.

The onion that the retired surveyor presented at the show was a real whopper: Measuring some 30 inches around and weighing 17 pounds 15 ounces. That’s a full pound heavier than the previous contender, which held the title since 2005. To grow this gargantuan onion, Glazebrook has been carefully grooming and talking to the plants for nearly 12 months. Despite its size, he says that he’ll let it go to seed instead of eating it.

Congratulations, Mr. Glazebrook. You are truly a god among gardeners.