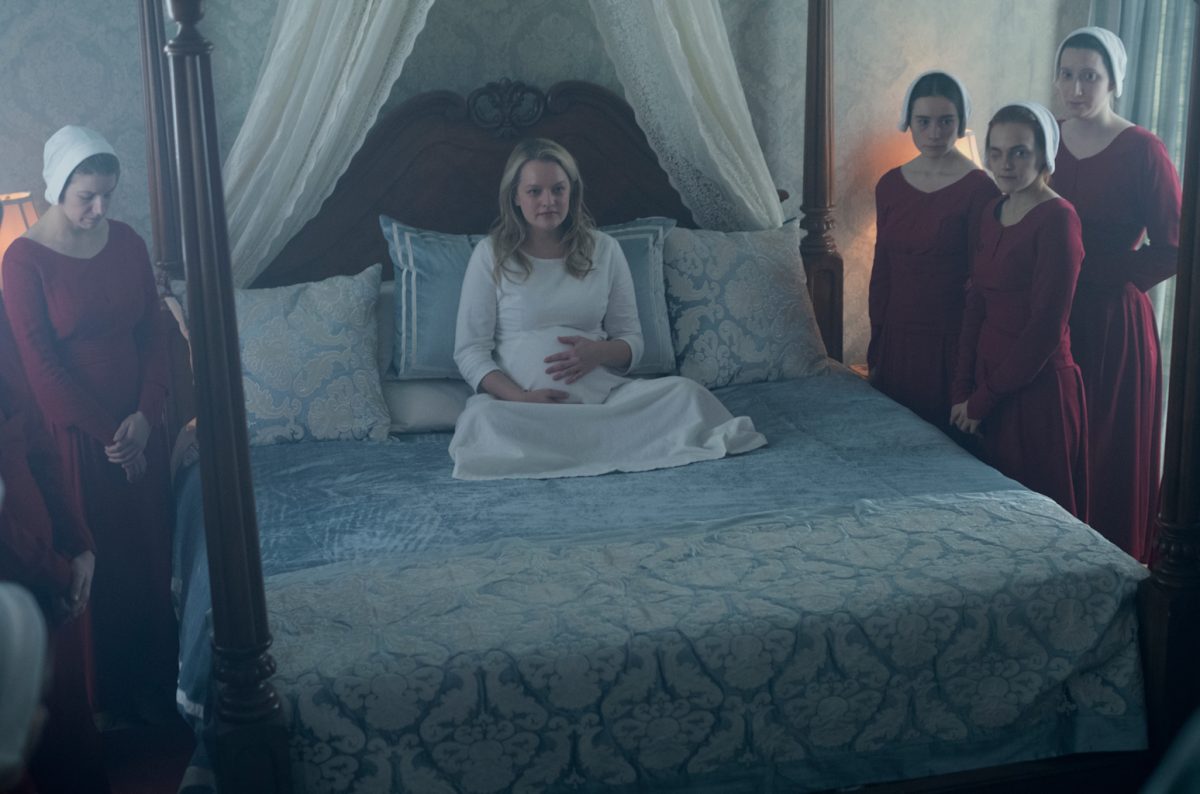 When Hulu’s The Handmaid’s Tale premiered last year, it immediately struck a chord with viewers who were facing a real-life oppressive political regime that eerily echoed the one in Gilead. Trump’s non-stop nightmare of an administration was still in its first few months, but had already made headlines with its xenophobic Muslim ban. Combined with the Republicans’ seemingly endless War on Women and reproductive justice, the fictional series about women enslaved as breeding stock was a disturbing parallel for the current political climate.

In this week’s episode “The Last Ceremony”, the series focuses on family separation in a stunningly relevant and disturbing hour of television. The separation of parents and children has been a major plot point throughout the series. The opening sequence of the pilot episode shows June and her daughter Hannah escaping into the woods before soldiers find them and forcibly separate the two. June is knocked unconscious with the butt of a rifle as Hannah is ripped from her arms. It’s an upsetting beginning that immediately sets the dark tone for the series.

Separating children from their mothers is a common practice in Gilead, where handmaids are nothing more than vessels for life. Season One followed Janine’s pregnancy and birth, after which her daughter Charlotte was renamed Angela, taken from her and given to Commander Putnam and his wife. Janine later kidnaps the baby and ends up on the edge of a bridge with Charlotte in her arms, threatening to jump. The stand-off brings armed guards, Aunts, commanders, and wives, but June is able to convince Janine to give her the baby before Janine jumps off the bridge and plunges into the frozen river.

Season Two has revolved around June’s pregnancy and its effects on the Waterford household. After a failed attempt to escape to Canada and a near miscarriage, June makes a last ditch effort to save her baby by securing promises from both Rita and Aunt Lydia to watch over her child. Their impending separation is all the more brutal when Serena Joy demands that June leaves immediately following the birth, instead of staying on to wean the infant. When June’s contractions begin, the handmaids and wives gather for the birthing ceremony, but it’s a false alarm.

Feeling humiliated by the false alarm, the Waterfords decide to”induce labor” by forcibly raping June as she screams and struggles against them. It’s a horrific and disturbing scene, and afterwards, Commander Waterford gifts June with a “surprise.” The surprise is a clandestine, ten-minute meeting with her estranged daughter Hannah at an isolated mansion.

This is the first time June has seen Hannah since their violent separation in the pilot, and their all-too-brief reunion is profoundly emotional. June is overcome with excitement to see her daughter, but Hannah (now Agnes) cycles through a flurry of emotions during the abrupt meeting. She alternates between being scared, angry, confused, and hurt by her mother’s inexplicable absence.

The scene features on a masterful performance by Elisabeth Moss, who has consistently done amazing work on the series. As Hannah screams for her mother as she is dragged away by her guards, June rushes out and finds the inner strength to comfort her estranged child. She tells Hannah that her parents will always love her, and that she has to stay safe and follow her new family.

The scene is so shockingly relevant in this current political moment, where families are being separated at the border and infants are being placed in custody. In another horrific parallel to the series, Attorney General Jeff Sessions uses Bible quotes to justify the practice, just as the ruling class of Gilead uses Christianity to justify their own hideous system.