The Han Solderer | The Mary Sue 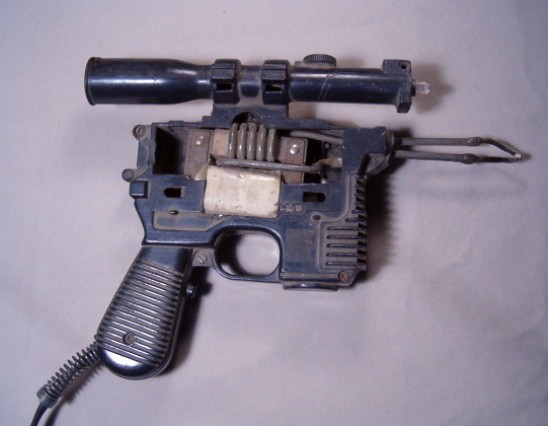 About 1983, when I was fifteen, I dropped my dad’s red Bakelite soldering gun and broke the casing. Of course he was upset, so I did my best to “fix it.” So I took my original Star Wars Han Solo pistol and gutted it to hold the soldering gun components. I even ran the lightbulb up into the scope on top. The button on the handle worked well for the trigger switch. Ten years later, when the old house was sold, the gun wound up in my belongings. To this day, when an underpowered iron just won’t do, I pull out the “Han Solderer” and get the job done. Half of me likes the mod, the other half is ill over the fact that I gutted my vintage Star Wars toy. What’s done is done.

It’s a shame soldering doesn’t make a “pew pew” sound. I guess Craig has at least one more modification to make.