The Governator | The Mary Sue

We Couldn’t Make This Up If We Tried: Arnold Schwarzenegger’s New Project: The Governator 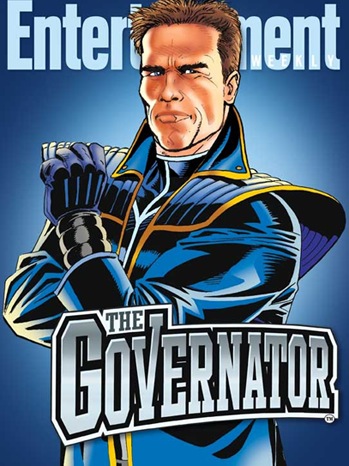 We’re actually almost at a loss for words. Arnold Schwarzenegger, fresh off of his eight-year stint as California’s governor, has given Entertainment Weekly an exclusive look at his newest project. Says Schwarzenegger:

When I ran for governor back in 2003 and I started hearing people talking about ‘the Governator,’ I thought the word was so cool.. The word Governator combined two worlds: the world of politics and the movie world. And [this cartoon] brings everything together. It combines the governor, the Terminator, the bodybuilding world, the True Lies…

Would it help if we told you that Stan Lee was in charge of it? No? Well, there’s more.

The Governator will be both a cartoon show and a comic book coming out in 2012. Says Stan Lee:

The Governator would knock the hell out of Iron Man.

There are many politicians that could lend themselves to a cartoon, but as far as being a superhero — lucky there’s only one Arnold Schwarzenegger and I got him!

But wait, you haven’t even heard the description of the whole thing yet. It is not as self explanatory as you think.

Along with the Arnold Cave, the Governator will have a fleet of super vehicles at his disposal, a closet full of “Super Suits” that allow him to fly and perform other super stunts, and a team of colorful sidekicks, such as Zeke Muckerberg, the precocious 13-year-old computer whiz who acts as the Governator’s cybersecurity expert. Naturally, there will also be recurring supervillains — including an evil organization called Gangsters Imposters Racketeers Liars & Irredeemable Ex-cons (or G.I.R.L.I.E. Men, for short). For Schwarzenegger, the cartoon is obviously the next best thing to being President. “I love the idea of a control center below my house with a path so that boats and submarines can go right into the ocean,” he tells EW. “In the cartoon, my house is much closer to the beach than where we live, but, you know, it’s a cartoon.”

Yes, well, I suppose you had to fudge something in adaptation.

The Governator is going to be a great superhero, but he’ll also be Arnold Schwarzenegger,” Lee says of the semi-fictional character. “We’re using all the personal elements of Arnold’s life. We’re using his wife [Maria Shriver]. We’re using his kids. We’re using the fact that he used to be governor. Only after he leaves the governor’s office, Arnold decides to become a crime fighter and builds a secret high-tech crime-fighting center under his house in Brentwood.”

Despite this, Schwarzenegger admits that he hasn’t told his wife about the project yet. He thinks “that it will be a big surprise for her.”

Fine. Can we see the Governator fight The Flaming C now?