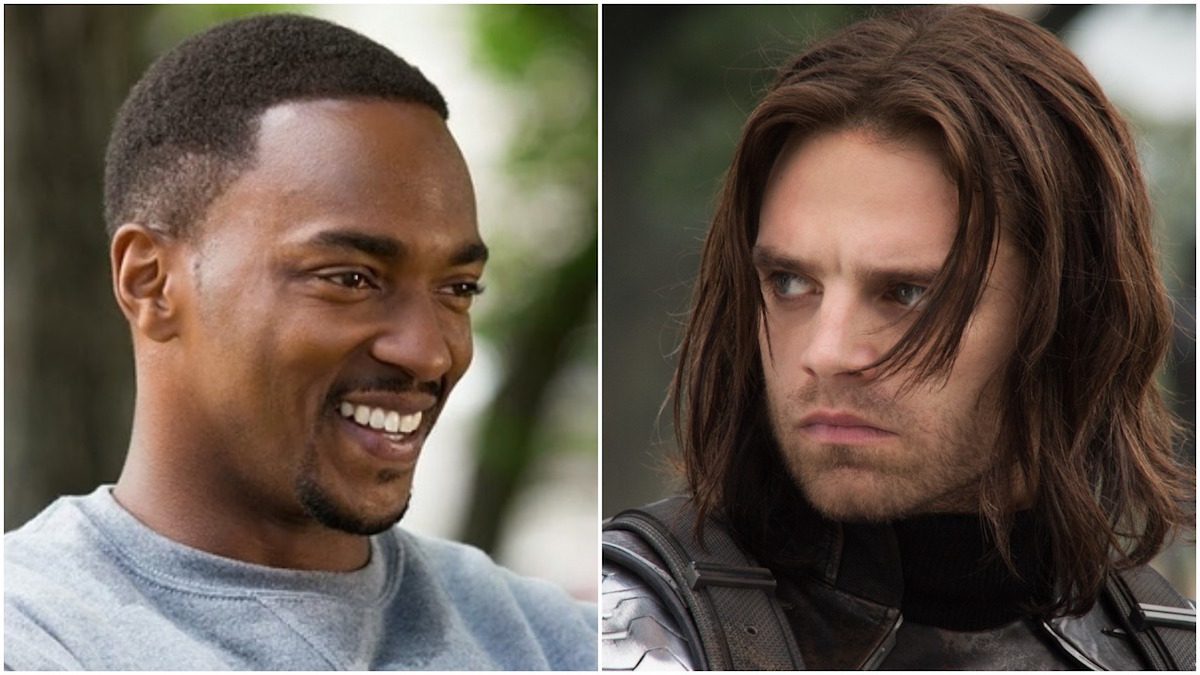 We have a look at some new styling for dynamic bickering duo Sam Wilson and Bucky Barnes on The Falcon and the Winter Soldier. Who else is rocking a whole new wardrobe? John Walker as likely antagonist U.S. Agent, an extremely badass Sharon Carter, and a hooded Zemo in the flesh. I just have a lot of emotions.

There was a time in my life circa 2014 when little mattered more than Captain America: The Winter Soldier. While these days I often challenge the Russo Bros. to meet me for a fight behind the schoolhouse, their first Marvel effort remains the best MCU movie to date. If you’d told me back then we’d one day have an entire series focused on the hilarious love/hate relationship between Sam Wilson and Bucky Barnes as they team up to probably defy the U.S. government and save the world, I would have wept real tears of joy. As it is, I’m feeling a little verklempt looking at this new official concept art for Disney+’s The Falcon and the Winter Soldier, so let’s dive right in:

This new look at Falcon’s new suit in #TheFalconAndTheWinterSoldier series has been officially revealed on the @disneyplus special EXPANDING THE UNIVERSE! pic.twitter.com/k7fXlTPs1t

We’ll kick this off with the love of my life and yours, Sam Wilson (Anthony Mackie). I can’t get enough of this look, which is a real throwback to Falcon’s old school comics costume while also managing to be sleek and modern. I appreciate that they’re making Sam so visually striking all on his own, no bulky wing-rig or allusion to original Captain America colors. The harnesses on the flight suit feel like a subtle nod to Steve, but everything else is straight-up Sam. He is not your propagandistic star-spangled man and I am living. This is Sam Wilson taking point in a Steve Rogers-less future. I have never needed anything quite so badly.

Speaking of going for a visual that is both a mix of the modern and the classic, Sebastian Stan’s Bucky Barnes is an entire mashed-up mood here. The collared dark blue outfit harkens back to his costumes in the ’40s in The First Avenger as well as in Infinity War/ Endgame, and both were drawn from looks that comics Bucky sported throughout the ages. He has the replacement vibranium arm so kindly wrought for him in Wakanda, and where there was once a red Soviet star on his old arm, he’s gone with white. Someone, probably Sam, has tricked him into cutting his hair. This Bucky looks like the swaggering Seargent Barnes from First Avenger, but the arm tells us how much more has happened since.

Sharon!!! You may have heard me complain before about the Steve/Sharon “romance” a time or twenty, but I’m a big fan of Sharon Carter on her own, as well as actress Emily VanCamp. I’m thrilled she’ll be properly in action on this show. Agent 13 looks suited up to be nigh-on bulletproof, and she has her trusty guns holstered in plain sight. I’m loving what a confident and tough-as-nails take on Sharon this seems to be already. Freed from the awkward attempt to make her a Cap romantic interest, I hope Sharon will get her chance to shine as an ally to Sam and Bucky. We’re not sure what her status is with the government after helping out the boys in Civil War, but I can’t wait to find out.

U.S. Agent’s uniform has been revealed in this official new concept art for #TheFalconAndTheWinterSoldier! pic.twitter.com/pvsgeSbY3S

OK. OK. OK. Hoo boy, this is a doozy. We finally see John Walker a.k.a. U.S. Agent suited up, and this would seem to align with rumors/speculation that he’ll be acting as a government-anointed Captain America replacement (the idea is that the government has doubts about our “war criminal” Sam, who rebelled alongside Steve and would tell them just where to shove any authoritarian conformity).

Set to be played by actor Wyatt Russell (Kurt and Goldie’s son!), in comics lore Walker is all over the map, sometimes a hero, sometimes an antagonist, almost always an uber-patriotic dick. My guess is that he’ll start off on a very wrong foot with Sam and Bucky, but it will be interesting to see if he reveals hidden depth of character. It feels heartbreaking to consider Sam and Bucky will likely have to face down, and fight, a man in a mantle rightfully his (Sam) and someone who could be a doppelganger for his beloved best friend Steve Rogers (Bucky and Sam, again). I’m already into how psychologically messed up and brilliant the choice to bring in U.S. Agent like this is.

Could U.S. Agent have come about via the meddling and machinations of one Helmut Zemo? Since all of this has been concept art until now, we have to take these proposed looks with a grain of salt until we see them actualized. But a new picture features the real Daniel Brühl as one of my favorite MCU villains on Falcon & The Winter Soldier. We’d seen fuzzy images of Zemo finally wearing a purple hooded look during San Diego Comic Con, and now at last he’s crystal clear. I could not be more excited that Brühl is coming back as Zemo to push villainous buttons. He’s a nuanced, fascinating bad guy who could possibly be a surprise ally in some situations.

If these are indeed the visuals we’ll be seeing on the show, it looks like The Falcon and the Winter Soldier is off to a strong start. The mix of comics nostalgia and MCU callbacks gets two thumbs up from me, and the cast that we know of thus far is comprised of engaging actors playing multi-faceted characters. This is the kind of superhero content we deserve headed into the wilds of 2020.