Michonne’s adventures in zombie-fighting and danger-evading continue in this final slice of our Let’s Play through the first chapter of The Walking Dead: Michonne. The second episode of Telltale Games’ series just came out, by the way, so you can expect our next video to move right along to that.

Last time in The Walking Dead: Michonne, our heroine endured some pretty rough “interrogation” techniques courtesy of Randall, and some condescending questioning from Randall’s sister Norma, who’s the leader around here (not that Randall listens to her much).

This episode starts with a bit of a time-skip. Randall leads the three captives — Michonne, Samantha and Greg (but no Pete?) — to a room they’ve never seen before. One of Norma’s underlings, Zachary, follows close behind. Inside the room, we meet Jonas, who is apparently Zachary’s boyfriend. Jonas storms off right away. Randall makes fun of Zachary a bit (it’s implied that the mockery is because Zachary is gay), then Randall hands Zachary a gun and tells him to stop acting weak. Just in case you needed another reason to dislike Randall!

For some reason, the bullying works and Zachary starts threatening the captives with the gun, even though previous scenes established that he didn’t care much for violent interrogation techniques. He doesn’t know how to hold a gun, though, which soon leads to him shooting Greg by accident. Randall gets angry at Zachary for shooting a hostage and drags him out of the room.

Left alone in the room with a bleeding-out Greg, Michonne and Samantha manage to get their zip-tie handcuffs off, thanks to a broken mirror. Michonne finds a shirt nearby, which she uses to compress Greg’s wound, but it’s too serious; Greg dies real quick. Somehow, Michonne already knows that this means Greg will turn into a zombie, and within a few seconds, he does. Samantha probably doesn’t have it in her to kill Greg (even zombie-Greg), so Michonne grabs a loose pipe to do the honors. Samantha does end up helping by restraining Greg so Michonne can bash his head in. Gotta destroy a zombie’s head, everyone knows that!

Zachary walks back in and seems shocked that Greg is dead (and zombified), even though Zachary’s the one who shot him. Michonne punches Zachary, causing him to drop his gun, which Samantha retrieves and points at Zachary. Samantha makes as though she’s about to kill Zachary; Michonne stops her, and in the struggle, Zachary gets the gun back. He doesn’t look too thrilled about having the gun in his hands again, though.

The credits for the first episode are about to roll, but before that, Telltale offers us a glimpse of what’s to come in Episode 2. We’ve got some more scenes in captivity with Samantha, but this time in the woods, plus Michonne getting her knife back (and also a hammer). This montage unfolds under a monologue from Randall about how Michonne seems like a killer to him. Takes one to know one, Randall!

Then, we get a glimpse of how our in-game choices stacked up compared to other players: 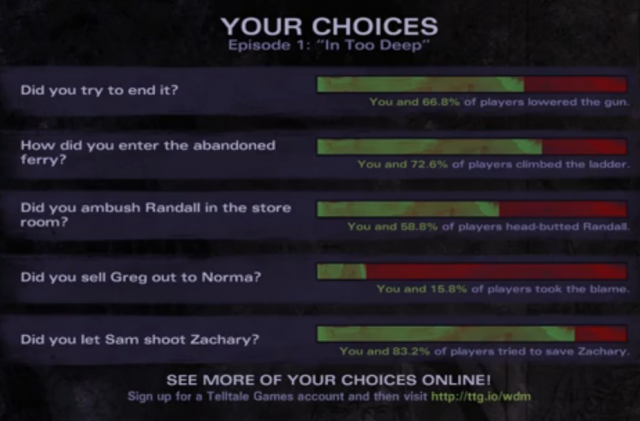 Almost everybody else sold Greg out to Norma, apparently. Other than that, our Let’s Play makes similar choices to what others did.

If you’d like to catch up on our full play-through of Episode One, you can do so via The Deadly Sue tag here, or you can watch the playlist in order on our YouTube channel!