Review: The Craft: Legacy Honors and Corrects the Failings of the Original

Five out of five pentagram points 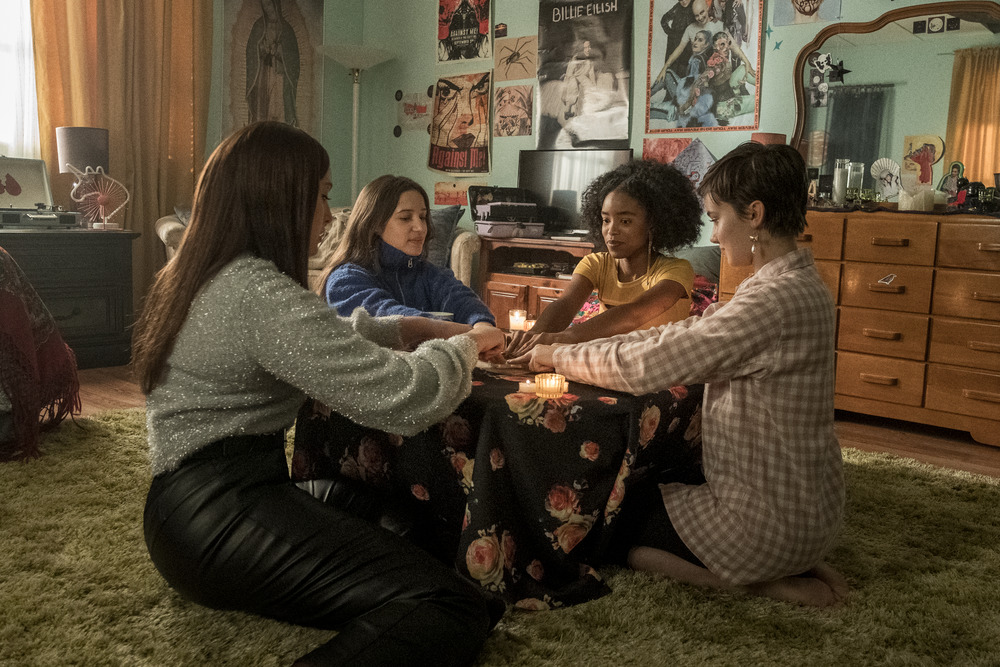 I’ve loved The Craft since the moment it hit screens in 1996. As a witch and a weirdo, I loved the movie that felt like it was about me, but part of it also stung, because the final third of The Craft is a bit of a mess. As our Princess Weekes recently broke down, the movie fails its BIPOC characters and punishes Nancy (Fairuza Balk), the most compelling character, for daring to be too powerful as a witch and as a woman.

So I was both excited and worried when news broke that we’d be getting a new version of The Craft this year, and that it would function as a sort of sequel, not a remake. I was worried that we’d fall into the old trope of girl versus girl, and that kind of exploitative, predictable horror.  Especially after last week’s remake of The Witches kept all the bad plot of the original and none of the artistry, I was nervous here. Well, praise Manon, because The Craft: Legacy feels deliberately created to represent the witches of today and to correct many of the first film’s mistakes.

This version of The Craft begins much like the first (with a direct homage in the title card even!) with a possibly troubled girl, Lily (Cailee Spaeny) moving to a new town. Lily begins her first day at a new school by being bullied for getting her period in class. She’s immediately taken in by a group of misfits who just happen to be witches looking for their “fourth.” You see, they need a representative of each element/corner of the compass to have a full coven. But they also welcome Lily in as a friend, not just a battery for more power.

Much like in the original, the trio of wannabe witches is made up of girls that don’t fit in, but they aren’t quite treated as complete pariahs the way Nancy, Bonnie, and Rochelle were in the original. The main witchy cast is also considerably and wonderfully more inclusive. Tabby (Lovie Simone) is Black, and Simone has said that the movie “puts a microscopic lens on what it means to be a young woman coming into her power.” Lourdes (Zoey Luna) is a trans Latina girl who is, in general, the most balanced and reasonable; director Zoe Lister-Jones has emphasized from the start the importance of Lourdes’ role, explaining, “it’s really important for me to represent today’s youth authentically.” We also have Frankie (Gideon Adlon), who’s a bit flighty and all over the place (it’s her element). The three represent Fire, Earth, and Air respectively, which leaves Lily as sensitive water.

Once the coven comes together, the film looks like it will be a rehash of the original, which would have been fine with me, to be honest, and I wasn’t expecting much, but what I got was … shockingly magical. For one, the girls use their magic on the boy who was verbally abusive to Lily and things go very differently from what you might expect. Rather than being punished, Timmy (Nicholas Galitzine) gets woke, and the consequences are way more interesting than a typical “bullies get bullied back but by magic” trope.

Nor does the film fall into the most annoying trope of many witch films, and the worst part of The Craft: the idea that magic and power in women is dangerous and will corrupt them so they must turn on one another. I’ll write later in more spoiler-y terms about how well this film flips the typical script, but suffice it to say, seeing girls come together rather than tear each other apart was amazingly cathartic and powerful. This is a film that’s truly, explicitly feminist and … that’s amazing.

The villain in The Craft: Legacy isn’t magic or other witches, it’s toxic masculinity. I’m not even being metaphorical here. I don’t want to spoil too much, but when Lily’s mom, Helen, (Michelle Monaghan) moves them in with her fiance Adam (David Duchovny) and his sons all named after Old Testament males, it’s pretty clear where the conflict will be. Duchovny plays Adam with a great mix of dad kindness and menace that gets the point across very well.

The rest of the performances are quite good. I loved Gideon Aldon as Frankie especially, thanks to her effervescent energy, humor, and deep pathos as other moments. But all the girls are great and most importantly, they are believable as actual teenagers. In the original, it was so clear the actresses were all at least in their 20s, but here the youthful energy flies of the screen. It’s also so fun to watch these girls try and sometimes mess up magic in ways that are fun and believable, because they are kids!

I also was really impressed by Galitzine as Timmy. Again, I don’t want to spoil too much but he does really strong work with a range of emotions and motivations and lacks any self-consciousness. Overall, I really can’t wait to see what these young performers do in the future … but I hope one of those things is a sequel to this movie.

Yes. I want more. The one big problem I have with this movie is that it’s too short. It feels like some parts are missing and that the final moments feel somewhat rushed. There are elements in the trailer that don’t make it into the movie and indeed other parts of the trailer that turned out to be spoilers for a few twists that I would have preferred to experience without wondering “when is this trailer moment coming?” But hey, we do get some really good homages to the original in ways that you don’t see in the trailer.

In some ways this feels like a long pilot for a television show I would 100% watch. I wish there was more time for every character and that we had fewer montages and more moments of the girls just being magical girls. Oh, and the magic? It’s a fantasy film so no, it’s not “accurate” in that real witches can’t freeze time etc. but you can certainly tell that actual witches were consulted by the production, and in general it’s respectful of the real practices and faiths this “craft” is based on.

So, if you’re a fan of The Craft but wish it was more feminist, inclusive, intersectional, and sensitive? Then definitely see this. It’s worth it, and I’m honestly so excited for it to inspire a new generation of witches.