We Are the Weirdos: How "The Craft" Changed My Life | The Mary Sue

“We Are the Weirdos, Mister”: How The Craft Changed My Life 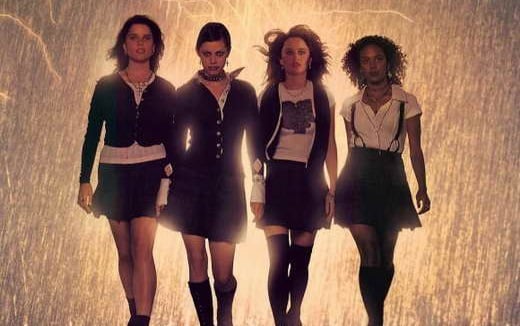 Editor’s note: A previous version of this article mistakenly identified the band that covered “How Soon is Now” as Our Lady Peace. Those responsible have cast out of the coven.

The 90s were a really good time for witches. Like vampires in the 2000s or zombies this decade, witches were the supernatural creature of choice in the decade where “girl power” became a marketable commodity. From Hocus Pocus in 1992 to Practical Magic in 1998, it was the pinnacle of magical cinema. But for me, nothing had quite as big an impact as the 1996 teen horror classic The Craft. And I wasn’t alone.

As a girl on the cusp of teenager-dom in the mid-90s, there was a lot of pop culture vying for my attention. Clueless came out in 1995 and defined the landscape of the whole decade. Not surprising, considering it was a funny, smart movie that has aged just as well as its star Paul Rudd. But stories of rich girls in bright clothes meddling in love affairs didn’t fully connect to me. I was one of the weird kids. I liked fantasy and female heroes. And I was into the growing movement of “natural magic” and Wicca, thanks to some books a friend had brought to school. When The Craft came out in 1996, it was like a movie had been made specifically for me–and I wasn’t the only one who felt that way.

For you poor souls who haven’t seen it, The Craft tells the story of Sarah (Robin Tunney)–a troubled girl who moves to LA and is pulled into the social and magic circle of three other outsiders: Bonnie (Neve Campbell), whose body is covered in burn scars; Rochelle (Rachel True) one of the only black students and the victim of racist bullying; and Nancy (Fairuza Balk) a goth chick who seeks out magic as an escape from her alcoholic and abusive family in the trailer park. When Sarah joins the coven, the girls’ magic suddenly begins working extremely well, leading first to empowerment and excitement, then to danger as Nancy goes too far in her search for power. There’s murder, flying and a LOT of bugs.

The Craft was the anti-Clueless in the best way (though Breckin Meyer ended up in both). It took tired teen movie tropes and turned them on their heads: the nerd versus the mean girls, the makeover, the Cinderella story, getting the most popular guy in school to love you. It was a “be careful what you wish for” parable where the consequences of magic, revenge, vanity and manipulation were fully explored. Even more than that, it was a story about female power from both sides, where men were incidental and often ended up dead. Both the hero and the somewhat tragic villain of The Craft were young women, and Sarah ultimately defeats Nancy not through rejecting magic, but through embracing it and using it correctly (that is: unselfishly). The Craft was smart and subversive, well-directed with a fantastic 90s soundtrack and full of subtle and scary special effects. Produced for a mere $15 million, the film went on to earn $56 million at the box office and became an instant cult hit.

The Craft struck a chord with girls like me. Nancy proudly declaring to a bus driver warning the girls to watch out for weirdos that “we are the weirdos, mister,” was rallying cry. I wish there had been more internet in 1996 beyond AOL message boards; so I might have known that across the whole nation, teen girls like me were setting up pagan altars and slapping on back lipstick. Being into “the occult” became a fad and modern witchcraft saw a huge boost of interest following the film’s release. Personally, it made me more passionate about something I was already into and gave me witch heroines to identify with and emulate (through confidence and fashion, not murder). I still remember the pride with which I wore my black vinyl “Nancy coat” in the fall of 1996 and all the little covens that sprang up in when I made it to high school. I have no idea how many people fully committed to Wicca because of the movie, but it’s a practice I still follow, at least philosophically, to this day. Certainly no movie has come as close to showing an accurate picture of the religion.

The Craft wasn’t a perfect depiction of modern Wicca, but it wasn’t trying to be. The actual witchcraft in the movie is undefined, and the girls invoke a supreme power (the football field on which god and the devil play) that doesn’t exist in modern pagan worship. Indeed, the term Wicca is never used, which I actually appreciate. As much as I loved Buffy, which premiered a year after The Craft in 1997, nothing annoyed me more than when characters referred to Willow as “a Wicca.” Charmed, which probably owes its existence to The Craft (they even borrowed Love Spit Love’s cover of “How Soon is Now” from The Craft’s soundtrack to use in their opening credits) handled the term better. Their highly fictionalized version of magic was clearly fantastical from the get go and the term Wicca was mostly just pun-fodder and the show stuck pretty well to at least the core moral the principles of modern magic.

Since then, actual witches haven’t done so well on the big or small screens. Witches are just another horror trope, which isn’t surprising. Magical women have always been a staple of scary stories and horror, because nothing is more frightening to the establishment than women with power. Witches still show up everywhere, from The Witch on the big screen to television shows like American Horror Story, but nothing has ever quite matched The Craft in tapping into a certain zeitgeist. In The Craft, the witches weren’t others or monsters or fantasies, they were us–weird girls latching on to something that promised them a way to be strong and celebrated being weird. Maybe we’ll see something like it again soon, though; a reboot of The Craft is currently in development at Sony, this time with a female writer/director who promises that the new movie will be more of a “twenty years later” story than a remake. I think all of us have high hopes. But maybe casting a luck spell won’t hurt.