The Communist Manifesto: The Comic Book 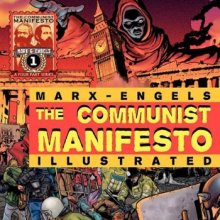 When my father was in high school, my grandfather became convinced that comics were a communist plot, and so he burned all my dad’s Ditko/Kirby/Lee era Spider-Man and Fantastic Fours.

Sure, everybody has that story about parents throwing away their comics, but this one seems particularly relevant now that George Rigakos has written a graphic novel version of The Communist Manifesto, quite a few years too late for my grandfather to use in justifying his actions.

From the Toronto Sun:

“We’ve barely started advertising and there have already been requests from England and Germany,” said Rigakos, who is also head of the editorial collective for Red Quill Books, a new peer-reviewed publishing house.

We’d like to nominate this project as the topic most likely to cause people who are unfamilar with comics history to reveal their unfamiliarity.  For example,  in that group of people requesting the book, there are at probably at least a few who are outraged that someone would make a book about communism for children (because ALL comics are for kids, of course).  Just listen to how the Sun describes it:

The Sun also helpfully mentions that “Shakespeare has also been turned into a comic,” as if the adaptation of classic literature was a new development in the graphic novel world and not, in fact, something that’s been going on since the 1940‘s.

I leave you with the somewhat unnecesarilly dramatic video preview for the four part comic: