The Anti-Disney Princess | The Mary Sue

A Woman’s Designed The Anti-Disney Princess, Except Not Exactly 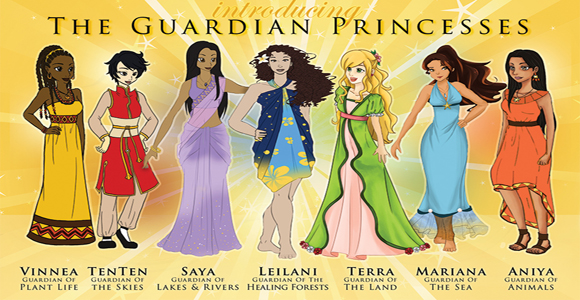 As is often discussed by feminists and supporters of diversity, Disney’s Princesses do not offer girls the best role models, especially given the same-size Caucasian-ness of most of them.  Some of the Princesses are better than others, but in most ways the Princesses emphasize looking pretty, wearing pretty dresses, finding your Prince Charming and not a whole lot else. (As we’ve discussed, Frozen is a welcome departure from that on at least some levels!) So a California mom has begun self-publishing a series of books about characters she calls the “Guardian Princesses” with the goal of offering girls an alternative.  Fast Company described these as the “Ultimate Anti-Disney Princess” but the truth is that ultimately they’re a positive change but not yet a solution.

The creator of the Guardian Princesses, Setsu Shigametsu, says that:

The dominant and traditional stories that portray princesses as waiting to be rescued by a prince are too restrictive and limiting for children in terms of their gender roles. We wanted to combine the action-oriented adventures and ethical challenges faced by superheroes to reinvent the princesses as superheroines. The Guardian Princesses protect people and the planet with their special powers.

We’re off to a great start – basically combining princesses and superheroes!  Awesome!  It’s a great idea to empower girls with princesses (which clearly already appeal to some parents and girls) that are also super powerful, capable, caring, and smart.  And it’s even better that these Princesses are ethnically diverse, allowing girls of many different races to see themselves in the pages of these books. The concept itself is fantastic and we need more of that out in the world.

So Shigametsu has the right idea: creating positive role models for girls that show them they have power and can lead based on more than just their looks. She was very deliberate in her design, with Fast Company saying, “Though they still have the giant twinkly eyes, tiny chins, small noses, poreless skin, and luscious manes of the traditional Disney cartoons, the Guardian Princesses were deliberately designed to range from size 2 to 14, and the group is racially and culturally diverse.” This is where the goals don’t quite match up with the imagery.  The designs are still pretty standardly “pretty” with every character in dresses and with the same long, flowing hair. And if you look at the image of the Guardian Princesses all lined up, you may notice a few things.  The biggest thing is that while supposedly they range in size from 2 to 14, that’s not very visible when they’re all lined up – they still all look pretty similarly shaped to the Disney Princesses other than a varying height.

Another big thing that also pops out in the lineup of all of them is that it looks like they were drawn by a few different artists and then all put in the same scale, which makes the wrong differences visible.  You see the differences in the art instead of seeing how the characters are varied and unique. As far as the plots of the books go, all of the book descriptions on the Guardian Princesses website sound pretty similar – each princess helps their community to obtain good food and a clean environment.  That’s not a bad thing, but it doesn’t exactly point to a lot of diversity. It also doesn’t point to these princess taking on superhero roles – unless the superhero you’re looking at is Captain Planet.

Ultimately, while these princesses are absolutely a step in the right direction, they may not be able to truly compete with the Disney Princesses and don’t go quite far enough to capture an audience that would otherwise be interested.