Processing the End of The Adventure Zone: Amnesty

Role to investigate a mystery 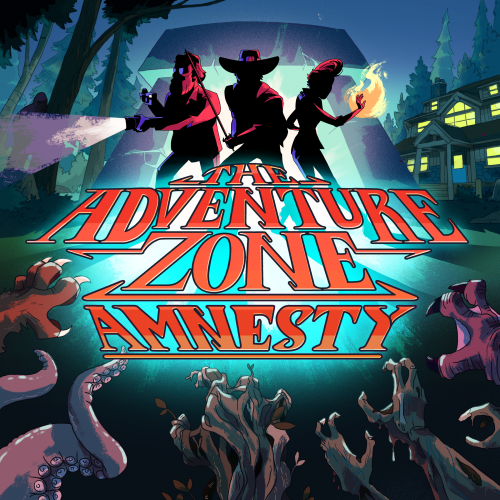 Around these here parts, we love us some McElroys and their role playing shenanigans over in The Adventure Zone podcast. The first Adventure Zone campaign – Balance – morphed from a goofy, experiment of three dorks (I say this with love) playing Dungeons and Dragons with their dad, to one of the most moving and epic adventures of recent memory. The Adventure Zone: Balance explored the power of story and connection in profound and surprising ways, all while being funny, diverse and accessible. It was a wonder, and it spawned graphic novels, cosplay and a vibrant fan community.

But TAZ didn’t end with Balance, much to fans’ delight. The McElroys – big brother Justin, middlest brother Travis, and sweet baby brother and thirty-under-thirty media luminary Griffin, along with father Clint – kept the show going with several experimental “arcs,” with new games ans new stories. The trials saw Travis and Clint take turns in the dungeon master (or game keeper) position, before lading on their next adventure: Amnesty. Like Balance, Amnesty saw Griffin back as the keeper of the narrative, a position that felt right, given the history and structure of The Adventure Zone, but in mother ways, it was a very different beast from Balance.

Balance was about three, well…morons: a dwarf cleric, a human fighter and a elf wizard, stumbling through various trials, and somehow managing to save the universe. Unlike Balance, which was a D&D campaign, Amnesty was based on the game Monster of The Week, and focused on three more slightly competent heroes who came together in the town of Kepler West Virginia to defend their town from other-worldly abominations, while also coping with the fact that many seeming monsters (bigfoot, vampires, the mothman) were just refugees from a dying planet. It was both more grounded – because it was a “real world” setting, but more fantastical and varied.

Amnesty was more structured and more developed than Balance from the get-go, and in a way, more ambitious. The McElroys came into it with fully developed characters who we instantly fell in love with: Travis played as Aubrey Little, a spunky, bi, street magician who developed real magic. Justin was Duck Newton, a forest ranger and reluctant chosen one, and Clint started out as Ned Chicane – a crooked proprietor of a tourist trap that trafficked in cryptids. Griffin added in his trademark cast of wacky NPCs and things got off to an exciting start. The strength of TAZ has always been in the characters and how funny and moving the McElroys can be when they really get into their roles.

As a listener, it was great fun to hear the guys get into a new world, a new game and new challenges. I loved that this campaign was set in “our” world, with characters who were slightly more accessible than elves and grim reapers. And the West Virginia setting especially allowed for the McElroys (who grew up in Huntington, WV, where Clint and Justin still live) to integrate the places they grew up – and rock some great west Virginia accents. Monster of the Week is a far more flexible and open game than Dungeons and Dragons, and most of the time, the game mechanics were quietly in the background as a basis for the McElroys to let lose and really dig into the story. And there was a lot of story.

Story is the one place I think Amnesty struggled not because any storyline on it’s own was bad, but there were perhaps too many of them. There were cryptids and magic and a portal to another world and aliens and two, large, over-arching mysteries. It all made sense in the end, but it was harder to follow than previous campaigns and I’m not sure that the heroes needed to be facing dual, world-ending threats. But then again. it all fit together perfectly at the conclusion and Griffin clearly had a plan for all of this from the beginning.

Something this campaign had that was unique was real stakes and danger for the characters – so much so that we actually lost a main character, in an Adventure Zone first. The death of [SPOILER] was incredibly well-done and moving, and I loved how the show continued to honor the character, while allowing the player to take on a new role in a new way. However, that meant that we went into the final arc with a new character to whom we weren’t as emotionally attached as the other two. It led to an emotional imbalance that, for me, minimized some of the impact.

But there was impact. I cried quite a bit during the final episodes, though not to the snotty, sobbing extent I did with Balance. The McElroys have a unique gift, especially Griffin, in their ability to weave a complex story free of meanness, hatred and vice. The Adventure Zone was, and remains, a uniquely compassionate kind of story-telling, based on connection and hope, and that’s something so rare in this world that even the imperfect efforts must be applauded, simply because there’s nothing else quite like it out there.

I deeply enjoyed listening to Amnesty, and I’ll probably re-listen (after I finish my third run through Balance, which is my auditory comfort object). I had the advantage of listening to Balance after it was completed, but listened to Amnesty week to week, which might account for my own confusion at some parts. Still,  Amnesty as interesting and complex in ways the usually succeeded, and I’m sure that whatever the McElroys have planned for their next trip into the Adventure Zone will be equally fun and captivating. And maybe it will keep up the tradition of making me unduly emotional over ducks.