The Adventure Zone Proves Listening to Criticism Is the Way to Improve Representation, Not Avoiding It 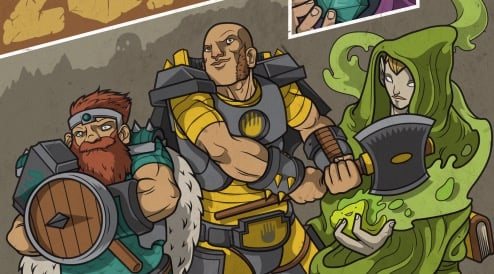 One of a writer’s biggest fears, unless they’re a tremendous asshole, is that what they make will end up doing more harm than good in the world. This fear is strongest when it comes to writing about and for marginalized communities. It’s easy to come at writing a character or storyline centered around the issues of marginalized groups with the best intentions and end up with a total mess. That potential outcome can leave creators wondering if it’s worth writing about those topics if they could end up just hurting people.

It’s important to talk about bad representation in order to answer that question, and it’s important to have an example of that to focus on. Maximum Fun’s The Adventure Zone, a roleplaying podcast hosted by the McElroy Brothers (Justin, Travis, and Griffin, also behind the hit My Brother, My Brother and Me podcast) and their father, just ended its first campaign a couple months ago. This show has grown to the point where the cast members now do live sessions across the country at different cons, dressed as their characters, and have a graphic novel adaptation on the way.

When the show first started, it was mainly just a way to fill time while on sabbatical from recording MBMBAM. Justin, one of the players, described the podcast as a “car that flew all of a sudden” when he talked about how they all realized that their goofy Dungeons and Dragons campaign filled with jokes about murder-boners was slowly becoming a legitimately compelling story. Suddenly, the campaign was not just their own narrative. It was becoming a journey that they shared with a diverse fanbase.

Griffin decided to introduce a lesbian couple in the third arc of the campaign: Sloane, the half-elf thief and battle-wagon racer who had been taken over by one of the campaign’s destructive Grand Relics, and Hurley, her halfling police officer partner who was ready to save her at any cost. At the arc’s conclusion, Hurley was fatally poisoned jumping through a thicket of thorns to rescue Sloane, and the thief sacrificed herself to save her, conjoining and transforming the both of them into a cherry blossom tree.

It was a moving scene, but it also played into a history of one or both people in queer couples often being killed off in mass media. The potential survivor’s usually left to have their remorse over their lost love become their character arc. They exist as a queer person “safe” enough for the mainstream, one who never fully expresses themselves. That, or they’re left to be swept off their feet by a member of the opposite sex.

Griffin hadn’t intended this. On Twitter, when this was explained to him, he immediately owned up to a “lack of mindfulness” to explain how he had stumbled into the trope while also attempting to set up other parts of the overarching story. Intended or not, however, Griffin had added to this long history of gays being killed in media.

The power of poor representation is that it reaches out into real life and builds on an overwhelming culture of suppression. It misinforms, it disheartens, and it makes people bury down or disregard themselves out of fear of what will happen to them if they fit into how they’re depicted. Poor representation can help to build these predispositions into a force that weighs down on the marginalized. Just trying to exist can be withering when society sees you through certain stereotypes. So, Griffin’s depiction of a lesbian couple, like it or not, had caused harm.

What was the best way to respond to this? The players and DM were four white cis hetero men. Justin had already decided that he would be playing his character, Taako the elf wizard, as a gay man. “[ . . . ]I don’t know why, that was just how it always seemed to me.” Would it have been better to avoid the subject and leave it for others to handle more carefully in the future?

We start to get into questions of who gets to speak in creative fields here. Who has a voice, and who gets to share their stories? It’s clear that there’s an ongoing problem with barriers in creative circles that keep marginalized groups from being able to tell their own narratives. Should white male creators keep out of telling these stories until this problem is solved?

If the McElroys had decided to hold back from exploring LGBTQIA individuals further because of how Hurley and Sloane played out, they would have never gotten to provide a depiction of a lesbian couple that actually survived to the end of the story and had a presence throughout the campaign, through Killian the orc and Carey the dragonborn. The latter only appeared in the storyline in the arc directly after the one with Hurley and Sloane. Taako would most likely have never gotten a boyfriend in the form of the Grim Reaper, a relationship that also survived to the end of the game. (That sounds like a metaphor, but … no, Taako dated the literal Grim Reaper.) We would have probably never gotten a great depiction of a trans woman in the form of Lup, Taako’s sister, and the campaign definitely would not have ended with everyone coming together to celebrate Killian and Carey’s wedding in one of the happiest days of their lives.

When people who can speak and get a large audience hold back on putting representation in their stories for fear of unintended consequences, they still stumble into doing something unintentionally. There are other people out there who have that kind of voice who don’t want any depictions of marginalized groups at all, or at the very least want to tightly control how they can be shown. Taking on this “do no harm” philosophy cedes that control to entirely. It’s helping to perpetuate not just this oppressive specter of stereotyping and misinformation, but also another message for some marginalized groups: that they don’t even exist.

The damage that bad representation can cause should not be disregarded. However, opting for no representation in order to avoid bad representation is a terrible idea. People with privilege need to both clear the way for marginalized voices to create their own stories and help depict these groups as well. A perfectionist attitude helps nobody, because the fact is that people often make mistakes.

Mistakes, and bad representation with them, don’t have to remain as failures. They can be turned into forward movement. Griffin and the rest of the McElroys listened to the marginalized groups they were depicting and continue to listen to them for advice on how to move forward. That’s the important part. Dialogue and recognizing failure allows for writers who make these poor judgment calls to not only learn from their mistakes but to actually make the differences they want to make.

As for Hurley and Sloane … they’re brought back at the end of the campaign in a way that doesn’t feel like Griffin messily trying to undo his own mistake. There’s consequences for what happened to them. They’ve turned into dryads because of their near-death experience. It’s still new life for them, though … and they’re all the more glorious because of their scars.

I’d like to thank TAZ Transcribed for putting the full text of several of the special behind-the-scenes podcast episodes up online for sourcing purposes.

Daniel Ryan Alarcon is a fiction writer who gets into huge rants about comics at the drop of a hat, can’t help but get enthused by every new pen-and-paper system he comes across, loves cartoons in all forms, and is chomping at the bit to tear through the implications they all have when it comes to gender, orientation, and political themes. You can reach him at [email protected].