Thanksgiving’s Origin Story Isn’t Exactly What You Were Taught

Does that mean we're going to get a gritty reboot of Thanksgiving? 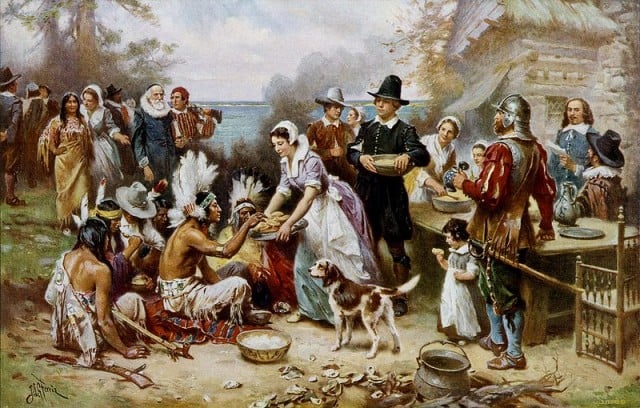 The story goes: in 1621, Squanto taught Pilgrims how to survive and farm in the new world. After the Pilgrims’ first successful harvest, they had a big feast to thank the Native Americans for helping them not die and probably apologize for the smallpox. It turns out that’s not so much the story of the first Thanksgiving as a Thanksgiving.

None of the above story is necessarily false, but to categorize it as the “first” Thanksgiving is a little misleading. Similar celebrations to give thanks were common in Europe any time something like a good crop rolled in, so it’s not like the Pilgrims were doing anything new. Really, they were probably just super excited about the whole “not dying” thing. So, they did what they would usually do in response to a good crop, and they wanted to let their Native American buddies in on the festivities with no future-holiday-creating ulterior motives.

Calling it the first Thanksgiving is just a nice story that elementary school teachers use to sneak in a little learning about how Native Americans helped settlers survive, and it has the added bonus of whipping you up into a fervor of nationalistic pride just in time to fight against the War on Christmas. Wait—I think that one got away from me; those two are probably not related. Anyway, it wouldn’t exactly instill the same sense of American pride if it was just some European tradition of partying every time something good happens.

So, who’s responsible for all of the lies? Turns out it’s a woman named Sara Josepha Hale, who is also responsible for such atrocities as “Mary Had a Little Lamb” and “most of the foods we associate with Thanksgiving.” The nerve. Hale was a writer who was so inspired by the story of what we’re taught is the first Thanksgiving that she wrote letters to several Presidents, over the course of about 17 years, asking for it to become a recognized national holiday.

In 1863, President Lincoln finally relented and turned Thanksgiving from a random, regional phenomenon observed mostly in the north into a full-fledged national Holiday. Hale’s obsession with the story of the Pilgrims’ Thanksgiving is what led to the popularization of the idea that it was the first, and since it was because of Hale that the holiday eventually became nationally recognized, that Thanksgiving may not actually be the first, but it is still pretty much the reason we celebrate the holiday today.

Still, Hale might have gotten a little carried away with the food that Thanksgiving is famous for. Here are a few of the food items that the Pilgrims wouldn’t have been eating in 1621: cranberry sauce, mashed potatoes, stuffing, pumpkin pie, and turkey. There’s a possibility that turkey was eaten at the Pilgrims’ Thanksgiving, but turkey isn’t mentioned specifically in any records of the event, and it’s just as likely that they ate other fowl and venison. 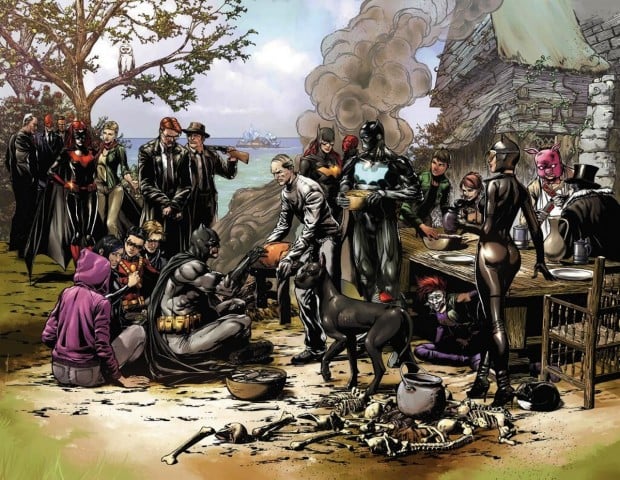 Batman probably wasn’t there, either. Probably. (via @Ssnyder1835)

The rest of the foods have some pretty obvious limitations as far as what the Pilgrims would have had access to at the time, since they were just celebrating their first successful crops in America. Pumpkins would probably have been eaten, but the lack of ovens and anything else needed to make them into pies precluded the appearance of delicious pumpkin-flavored dessert.

What did they eat? Probably ducks and geese, and maybe turkey, venison, and lots of corn. Seriously, probably a lot of corn, being that it’s a truly American food that the Native Americans helped them farm.

So why do we eat all of those other things? Because they are delicious. You’re welcome. Enjoy your Thanksgiving.

No, wait, there are also reasons. Hale is responsible for the popularization of most of the staples, and really, she just seems to have had great taste in food. Turkey, on the other hand, quickly became standard fare at holiday celebrations even in Britain after its discovery in America. The bird was large, plentiful, and other delicious animals like hens and cows were more valuable for the things they produced while still alive than they were as food themselves.

Unfortunately for turkeys, they didn’t really do anything useful besides taste amazing, so people decided pretty quickly that it made sense to eat them when a lot of food was necessary for the holidays. It’d be kind of a killjoy to have shortages of eggs and milk every time a holiday rolled around, and that’s the real reason that turkey is a holiday staple.

There you have it. The Pilgrims and the Native Americans palling around didn’t invent Thanksgiving, it was just a nice story that the author of “Mary Had a Little Lamb” used as a way to, well, basically invent Thanksgiving. What’s with all the delicious food? Maybe she just had a deal with the lambs to keep them off the menu. The world may never know.

(via Mental Floss and Slate)