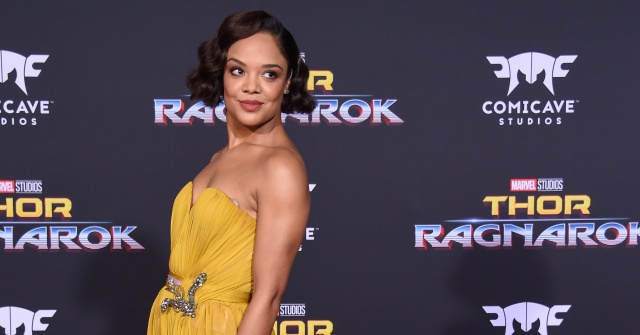 Once upon a time, when I was work at a certain independent New York City bookstore, I was in the basement, and I saw Tessa Thompson. This was after Creed, but before Westworld, but I knew who she was in an instant. She came up to the desk asking for astrology books, and we directed her over to the right section. After a moment of deciding that it would be less creepy if I just said hello rather than gawk at her, I told her that I loved her work. She smiled, shook my hand, and asked me my name. Her humility and kindness in those moments were amazing, and even though it lasted for less than a minute, it meant a lot to me.

You see, growing up as a black woman who loved sci-fi and fantasy, I didn’t see myself a lot in those genres, and when I did, it was always separated into “black science fiction” or “black fantasy.” My heroine, my one light in all of that, was Gina Torres. She was the first person I was every able to see in shows I loved that looked like me from Xena, Hercules, Cleopatra 2525 (you better believe it), and of course Firefly. Gina Torres was my black woman in space growing up.

As a teenager and young adult, I was exposed to more amazing black women in fantasy: Tara, Bonnie, Gwen, Iris West, Martha Jones, Alisha, and Abbie Mills. Yet, the thing that broke my heart about them was that most of the time I would see them mistreated by fandom, poorly written, or largely under-appreciated. So whenever I see a woman of color who’s embraced by fandom and gets hers, I’m thankful for it.

I first knew of Tessa Thompson from Copper and Dear White People, but her roles in Creed and Westworld launched her off into mainstream attention. When it was announced that she would be playing the role of Valkyrie in Thor: Ragnarok, I was nervous—not because I thought she wouldn’t do well—she’s a bad ass, of course, and was amazing—but I didn’t want her to deal with the backlash of being a race-bent character.

Every time I’ve seen a black woman take on a role “meant” for a white woman, the internet lets out this racist death rattle about how diversity politics and representation is ruining everything, blah-blah-blah. So when I saw that Thompson would be stepping into the role of a comic book character who was white and blonde, I was nervous, but I can also say I was wrong.

Were there trolls? Of course. It’s the internet, but not only was Thompson a badass, she delivered it in a way that no one could question she was the perfect person for the role. Not only could she play the drunken, broken parts of the character, but also the haunted traumatized sides of a woman dealing with PTSD and what was probably the death of her lover. Thompson also stood up for Valkyrie’s bisexuality, and while it wasn’t stated with a capital B in-universe yet, it is still canon, and I’m hoping that next time we’ll get a textual confirmation.

Meanwhile, Thompson’s star continues to rise with appearances in Annihilation, Avengers: Infinity War, and Sorry to Bother You, and on TV, she’ll be returning to Westworld. Also, is there anyone more perfect to play Alana if there’s a Saga miniseries? The answer is no, and Tessa knows it.

So now, instead of just one black Latina in space, we have two, which means that when Infinity War comes out, we’ll have so many POC on one screen in this comic book space epic.

Long live the Valkyrie and Tessa Thompson, our newest Afro-Latina warrior and current #gfgoals at The Mary Sue. You should be so lucky she kicks your ass.