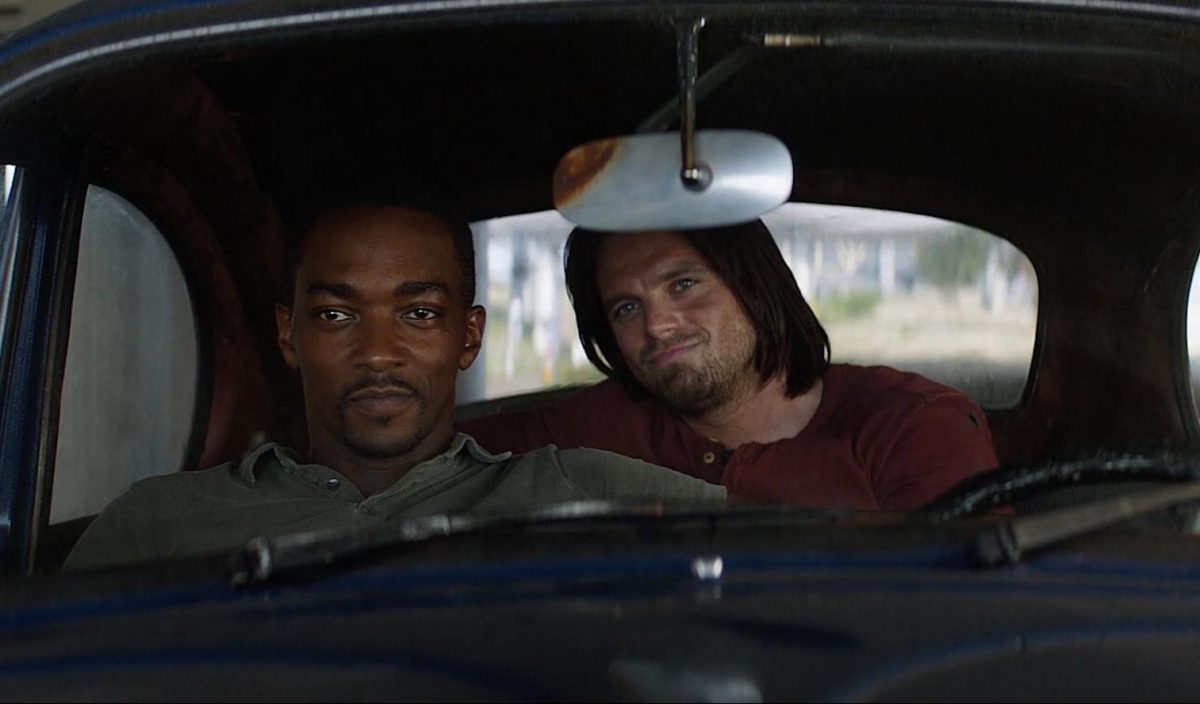 My time is here; I’m ready to thrive because it seems as if Bucky Barnes has cut his hair. Leader of team “James Buchanan Barnes, cut your hair,” I’ve been waiting for the return of 1940s Bucky since Captain America: Civil War, but then Avengers: Infinity War came, and he was suddenly rocking a half-up look, and it got ridiculous.

Now, though, Bucky and his new star-spangled best friend, Sam Wilson, have new looks for their new show, The Falcon and the Winter Soldier.

First, let’s talk about Sam Wilson. The new Captain America, Sam’s new outfit looks to be a more colorful approach to the original Falcon suit, and maybe we’ll see a little bit of blue in the full look? (In the poster, we can only see Sam’s profile, so who knows what the suit has to match his new title.)

Still with his famed crewcut, Sam’s new look is more about his suit than anything else, which makes sense. When you change from the Falcon to taking on the shield, you have to upgrade your look a bit, and with the red and white of his suit matched with Bucky’s blue? Our favorite American duo seems to be taking to life post-Steve pretty well.

And then, there’s Bucky. The iconic flowing locks of Bucky Barnes have been a source of many a fan meltdown. They love them; they want them to remain beautiful and flowing. For me, they’re impractical, and when he does pull his hair up, it’s only in a half-man bun, and it’s a mess.

I’ve wanted Bucky to cut his hair for 3 movies now, and finally, my wish is becoming a reality in The Falcon and the Winter Soldier. From the picture, it looks as if Bucky will still have his Shuri-made arm, as well as the new blue vest look that he adopted in Infinity War. Rest in peace to his funeral bomber jacket.

All that being said, The Falcon and the Winter Soldier is probably the show I’m most excited about out of the Disney+ streaming service. These two characters have always had the most interesting dynamic with one another, and seeing them actually get to explore one another and their life after Steve Rogers without it being a sidelined piece in a bigger movie is going to be exciting.

I still hope that we’ll see a bit of an influence from the Kyle Higgins run of the Winter Soldier comics in the show (especially with Sharon Carter being a part of it), but then again, we have a lot of ground to cover for the two characters, and I can’t wait to see where these two end up together.