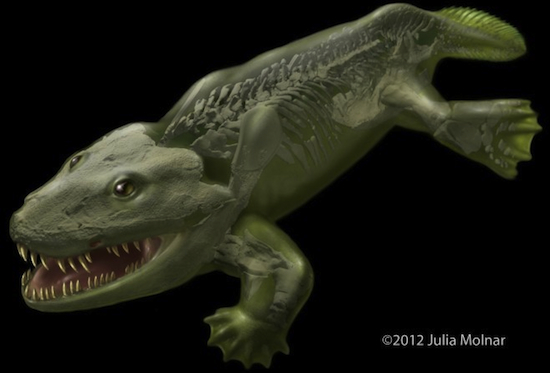 One of the greatest nemeses of any paleontologist, aside from scarce government grants and scant paychecks, is the very rock they chip away at to reach the fossils within. Most of the time it shatters with the well-placed strike of a hammer and chisel, but there are frustrating occasions when rock decides to be an impenetrable jerk for the day and hold fossils hostage. That’s an especially frustrating result when the fossils in question that could potentially reshape an entire field of study. New applications of technology are making it possible to get around — or at least inside — stubborn rocks that refuse to yield their fossilized secrets. One team of researchers did just that when they used powerful X-rays to scan and analyze the fossil remains of early tetrapods, revealing that their unique bone structure meant they walked about like modern day seals. Which is really kind of adorable the more you think about it.

This study on ancient tetrapod skeletal structure and audacious defiance in the face of rocks worldwide was led by Stephanie E. Pierce from The Royal Veterinary College in London and the University of Cambridge’s Jennifer A. Clack. Joining them were scientists hailing from Sweden’s Uppsala University and the European Synchrotron Radiation Facility (ESRF) located in Grenoble, France.

The assemblage of some of Earth’s mightiest scientists convened at the ESRF, where they had collected an impregnable rock sample containing three 360-million-year-old fossil fragments. Since breaking through the rocky layers via conventional means was out of the question, the application of synchrotron radiation at high levels was used to create three-dimensional X-ray images that provided them an opportunity to analyze and gather data on the fossilized tetrapod remains. It was always known that today’s tetrapods have a vertebra consisting of one bone extending from head to tail as opposed to those of their ancient forebears, which were composed of multiple parts. The images from the X-ray revealed, however, that the initial order we had placed the segmented vertebrae of ancient tetrapods was actually backward.

With this new data, Pierce and her team discovered that past analysis had erroneously labeled the intercentrum as the first bone in this vertebral order when, in reality, it is located at the end of the column. According to Pierce, that’s an important development because:

By understanding how each of the bones fit together we can begin to explore the mobility of the spine and test how it may have transferred forces between the limbs during the early stages of land movement.

Based on these findings, it was concluded that early tetrapods ambled across terra firma and shallow water much like seals, dragging themselves along to hunt prey or propping themselves up and pretend to play a saxophone to the delight of audiences at SeaWorld. Okay, the last part has no basis in fact, but you can’t say that giant amphibians with an affinity for brass instruments wouldn’t make for one heck of a show. I would totally watch that.

In addition to these discoveries, the bone structure of one of these prehistoric beasts, Ichthyostega, provided insight into the particular tetrapod’s physiology when scientists noticed a series of bones going down its chest — combining to create a precursor to a sternum. Clack said:

These chest bones turned out to be the earliest evolutionary attempt to produce a bony sternum. Such a structure would have strengthened the ribcage of Ichthyostega, permitting it to support its body weight on its chest while moving about on land.

Now that we know Ichthyostega had such a mighty, muscular chest, it makes us wonder if there’s evidence to suggest that it was the only one doing push-ups while other ancient tetrapods were crawling around in the mud like a bunch of lazy slackers.