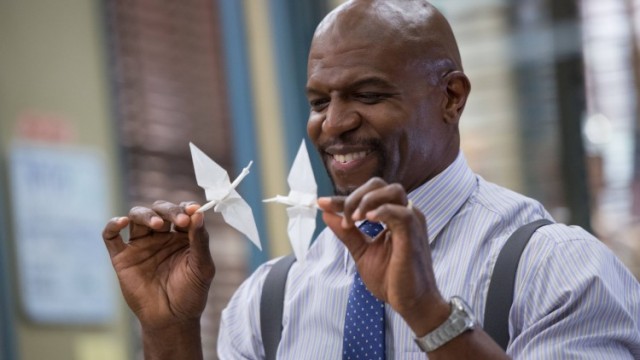 The word “feminist” has weathered a lot of irresponsible and uninformed criticism from surprising places of late (cough cough, TIME), so when celebrities use their visibility and influence to address misconceptions about the label, that’s definitely worth celebrating. And now “the F word” has gained two outspoken (heck, one of them even wrote a book on the subject!) high-profile allies—Terry Crews and Frieda Pinto.

In addition to playing Brooklyn Nine-Nine‘s Sergeant Terry Jeffords, Crews is also a published author, having just released his book Manhood: How To Be A Better Man—Or Just Live With One. In an interview last week about the dangers of masculinity and the urgent need for equality amongst all genders, Crews lamented the recent taboo surrounding feminism, called out the “Man Code” and its acceptance of rape culture, and even compared misogyny to the Taliban. Yes. That happened.

You can (and should, time allowing!) watch a video of the interview above in full, but here are some of Crews’ most astute points:

The big thing about feminism is that it scares men […] I want to be clear: feminism is not saying women are better than men. That’s not what’s going. Some people totally see it as that. What it is is that we’re talking about gender equality, true gender equality…but the problem is that men have always felt like they’re more valuable…I have been that guy where I felt I was more valuable than my wife and kids.

…I’m living in the real world and you can drink the Kool-Aid all you want. A lot of guys love the Kool-Aid. The sports world is Kool-Aid world…You can do anything if [you win]…What happens is they win and they go, “You know that girl? She’s my trophy. I deserve that girl. In fact, she don’t even want to be with me, but I don’t care. I’m going to take it.” What kind of mindset is that? Never never never never never should that ever be accepted. That’s not “code.” That’s Taliban. That’s ISIS.

If you don’t say anything, you are, by your silence—it’s acceptance. I’m not going to be silent.

Crews isn’t the only celebrity to stand up and defend feminism in light of recent criticism. In conversation with the Press Trust of India, Slumdog Millionaire and Rise of the Planet of the Apes actor Freida Pinto also explained,

Feminism to me is equality. There is no man over woman and vice versa. Feminism is a very misconstrued and misunderstood topic. “As soon as we say feminism, it does not mean all men should become subordinate and women should be the ones who rule the world. The only way we can have a progressive and successful country or world is when men and women treat each other as equals.

Previously in the F word