Tell Me a Story Crew: It's Like Nothing Else on Television | The Mary Sue

Fairy Tale-Based Tell Me a Story Cast, Creator Explain Why It’s Like Nothing Else on Television 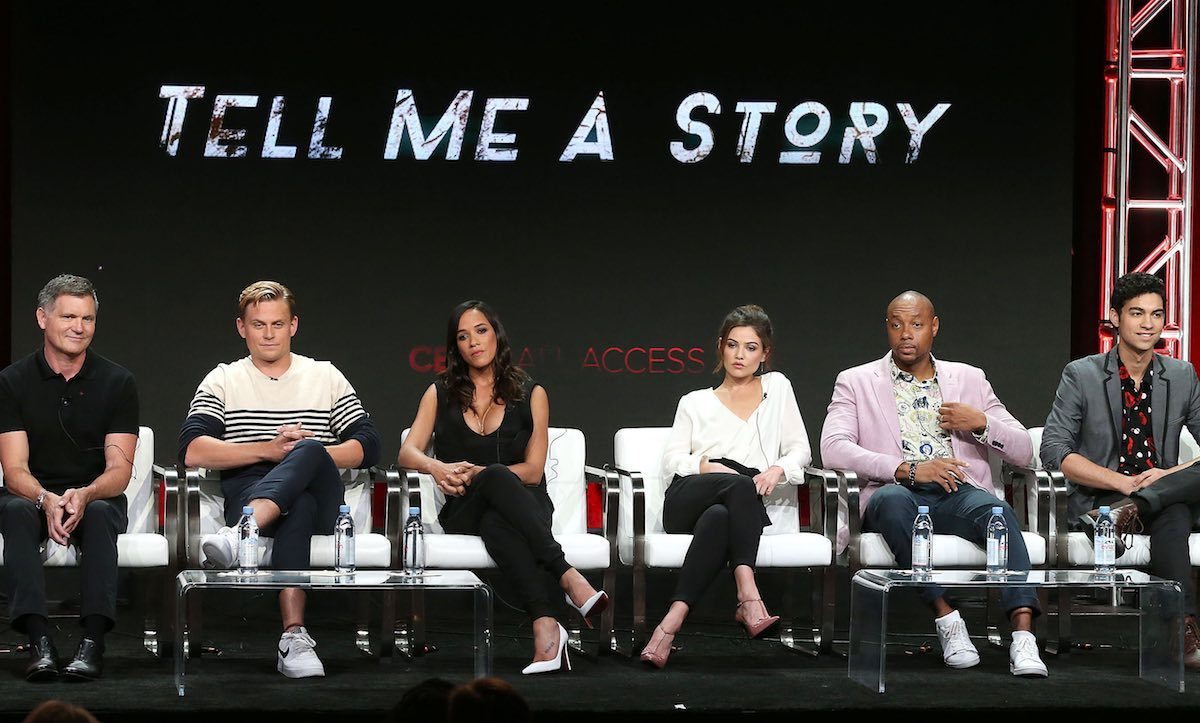 Kevin Williamson believes his new CBS All Access show, Tell Me a Story, is unlike anything else on television right now.

Perhaps he has a point: Tell Me a Story takes classic fairy tales and turns them into present-day thrillers set in New York City, with season one tackling three intersecting stories based on the Three Little Pigs, Little Red Riding Hood, and Hansel and Gretel—but the show has no supernatural elements.

In fact, Williamson calls the show, an adaptation of an Argentinian series, a “character piece.”

“It’s not a grim show; it’s sort of a hybrid,” he told reporters at the show’s panel during the Television Critics’ Association’s summer press tour on Sunday. “We really get to know the characters. It’s a wonderful relationship drama. It’s funny; it’s got some cheek to it. Because we’re using fairy tales, you have to kinda go, oh yeah, that’s the wolf, that’s the … You have to figure out where the real fairy tale exists and how it’s subverted. It’s a very emotional show, at its core.”

Because it’s grounded in reality and is set in modern New York City, the show will also seek to tackle topical issues through its storytelling.

“I think it’s most exciting to see the story relate to the real life we have going on,” said Davi Santos, who plays Gabe. “The Three Little Pigs is bouncing off this police brutality protest going terribly wrong. So it’s great to be a part of something that is evergreen, but that isn’t just playing to a story that everyone knows, but it will have all these critical issues reflected in the stories.”

For some of the actors, the fairy tale element of the show brings things full circle from their childhoods.

“I really loved Little Red Riding Hood [when I was young],” said Danielle Campbell, who is playing Kayla, the series’ version of the character. “In the original, she was a very sweet girl, and our version, which made it really fun for me to play, she’s troubled, she’s going through loss, she’s trying to distract herself, so she’s going out all the time …”

According to the new trailer, it appears Kayla attracts the attention of a Big Bad Wolf type in Nick, played by Billy Magnussen, but may turn the tables a bit on him.

And yes, the iconic red hood does make an appearance, albeit a brief one, for now.

“Our story is the Three Little Pigs storyline, and as a child, that was the first thing I ever remember reading,” added Dorian Missick, who plays the character of Sam, involved in some sort of botched robbery featuring creepy pig masks. “My mom read it to me and then when I read it back to her, I felt like I was part of this club, like I can read now! So now that I’m actually part of this now; it’s kind of like it’s full circle, except I think my mom took the last page out, because the way it ends—”

“I think if I read it as a kid, I would have had nightmares,” Missick concluded.

Williamson, coming off of The CW’s The Vampire Diaries and ABC’s short-lived Time After Time, said he wasn’t necessarily looking to do another TV show right away, but the project immediately piqued his interest.

“This reminds me a lot of my early days. The fairy tales, it took me to another world, but yet it’s not,” Williamson said. “What I liked about this show was there is nothing else on TV like it, and that’s what I wanted to do. I wanted to do something that was different. I don’t feel like you can find this show on any channel out there. It sits in its own little world.”

The cast and crew were also bolstered by being on CBS All Access, without the constraints of a traditional broadcast network.

“I was on [NBC’s] Southland, and we pushed the envelope as much as we could,” said Missik. “We got a lot of beeps, things like that, and we’d get the script and be like, ‘Okay, how much of this are we gonna be allowed to shoot?’ And now we get the script and go, ‘Oh, we’re going to do all of this and probably more.’”

Or to put it more bluntly, according to Dania Ramirez, who plays Hannah: “We get to curse. We get to have sex. We get to murder people very gruesomely!”

The show also stars Paul Wesley (who is a part of the Three Little Pigs storyline), James Wolk, and Kim Cattrall (who plays Colleen, Little Red Riding Hood’s grandmother), but because season one is currently in production—and filming episode four—the three actors were not a part of the panel.

Tell Me a Story will premiere on CBS All Access on Halloween.

Linda Ge is a writer and freelance journalist. She was most recently the TV Editor at Tracking Board and before that spent three years as a TV Reporter at trade publication TheWrap.