I too wish to participate in Tubby Hot Summer 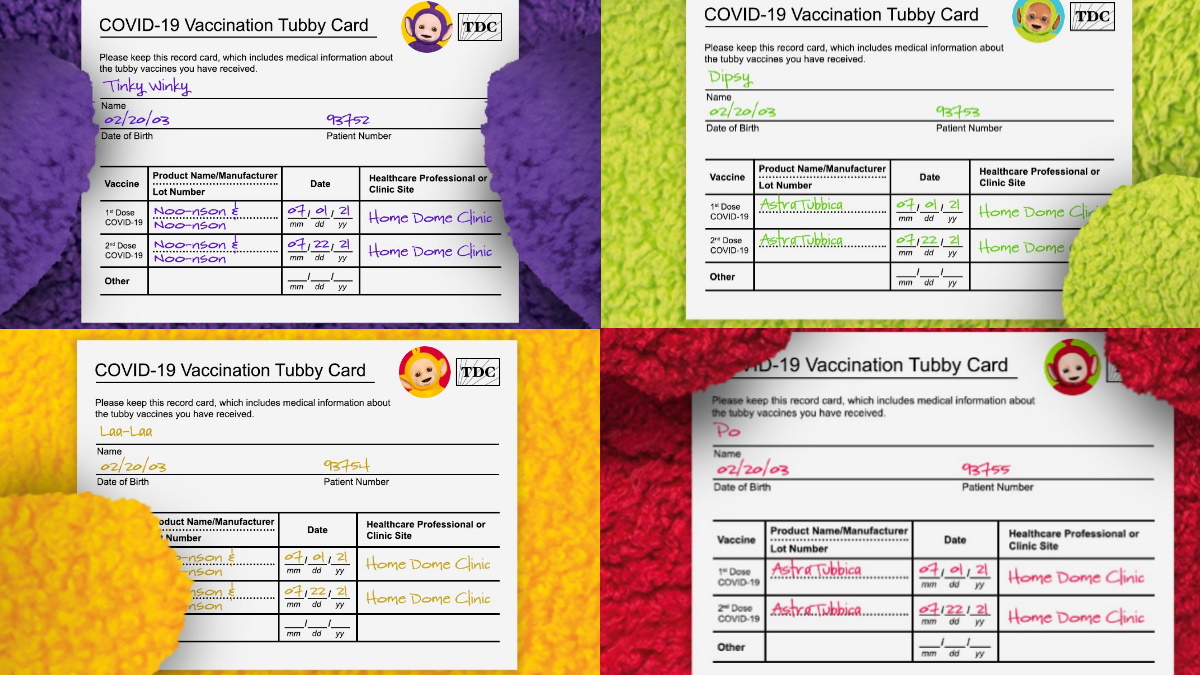 With the Sun Baby making the weather warmer, the Teletubbies are more than ready to go out and play in the grassy hills. However, every good Tubby knows that the best way to prepare for Tubby Hot Summer is to get vaccinated.

We’re all vaxxed! Just in time for a Tubby hot summer ☀️ Who’s ready to come out & play pic.twitter.com/AtXTExaCMs

The push to make sure we’re all vaccinated has been creative, to say the least. Many governments and companies all across the world have offered incentives to try and get people to go in for a shot. In the case of the Teletubbies, it’s a cute way to use iconic characters to drive the “vaccination is important” narrative.

But honestly, I kinda expect this from children’s programming. Children’s programming is known for taking important issues and simplifying them in a way that’s easy to process. Back in May, Elmo’s dad, Louie, got vaccinated, so he and his family could get back to cookouts, playdates, and other activities.

The Teletubbies are simply joining the ongoing vaccination narrative.

And that’s the end of the story!

I’m kidding. It’s the Internet. You know there’s more to this story.

Now, truth be told, not every response has been someone having a big-brain moment about there being Vaxxietubbies. Some have been genuine and even responded in a way that correlates with the Teletubby universe.

I like the implication that Noo-noo was the one to vaccinate them pic.twitter.com/zpXTLJTwRM

Others have pointed out that somewhere out there is a person who is big mad about the Teletubbies being vaccinated.

I’m sure if I keep scrolling through the thread I’d find the inevitable “stop spreading propaganda to our kids” comment as if children’s programming hasn’t been educating the masses (both child and adult) for decades.

However, the number one thing that kept getting brought up was that 2003 on those Teletubby vaccination cards.

Maybe, actually. Their home looks an awful lot like a TARDIS pic.twitter.com/ZJgcRurM5Q

The first episode of the series was March 31, 1997, a date I will remember for the rest of my life because of how quickly the, um, Teletubbies fandom responded when seeing 2003 because you can’t just go around messing with lore like that.

You also can’t lie about your DOB on medical forms, either.

it’s illegal to lie about your DOB on medical forms *ahem* (for real though why not just make that their birthday??) pic.twitter.com/Ck1J5wkTYJ

why are they born six years after the first episode came out. why are the second shots in the future. why are they getting two shots of J&J. what is HAPPENING.

Maybe the date is based on the 2015 revival? And we know 2015 wouldn’t make them old enough for the vaccine, so maybe they picked a date that would make them 18?

That being said, them being 18 has led to some … other revelations.

the teletubbies have confirmed that they are all 18 which means that they can be drafted into a war https://t.co/4h4kCoHuGO

That’s not the only foreboding revelation people have had. Some have pointed out how the vaccine, Noo-nson & Noo-nson, is a clear play on Johnson & Johnson, the vaccine that was 1) one-shot, and 2) the vaccine that was paused for a brief period of time. This technically means that Tinky Winky and Laa-Laa got the shot one too many times.

NOOO YOURE ONLY SUPPOSED TO GET 1 DOSE OF THAT ONE pic.twitter.com/iojc3IzIkM

Others have realized that this means that the Teletubbies are susceptible to getting diseases, so much so that they have a Home Dome Clinic at the ready.

This complicates the Teletubby lore immensely. Assuming this is canon, it confrims that:

– Teletubbies takes place on Earth during the current time period (huge, very disturbing and worrying revelation).
– The Teletubbies are susceptible to disease.

Not to add to the social media panic about Tinky Winky, Dipsy, Laa-Laa, and Po, but you’re also not supposed to post your vaccine card online. Feel free to flex the “I Got Vaccinated” Noo-noo sticker, but keep that card in a safe place.

Also, it’s not July 22 yet, so did they get the shot in the future then return to show us the card in the past?

In conclusion, this single tweet has reminded me that the Internet can be a wonderful place. Where a children’s program leads to us wondering if its characters are ageless entities who lie about how old they are in order to get vaxxed for Tubby Hot Summer.