But before we get to Allison taserig Peter: Deaton! He manages to get his hands on some Nogitsune poison, a plant called letharia vulpina that grew from the blood of the Yakuza boss/Nogitsune that the Oni killed in Chris Argent’s flashback. The whole scene is basically Deaton being a BAMF. No wonder the writers only have him show up a few times a season; if he helped the Beacon Hills Scoobies with any consistency, all their supernatural problems would be fixed before they became problems, and there’d be no show. *coughbadwritingcough*

Back in Beacon Hills Kira avoids the live wire that was heading her way, but an ambulance isn’t so lucky; it crash lands into a fire hydrant, turning the parking lot into electrocution central. Isaac gets himself fried trying to rescue the driver, and Scott and Derek can’t help him lest they get turned into crispy werewolves, too.

Luckily, Kira laughs in the face of electrocution. She does a sweet backflip over a car (do all supernatural creatures in Beacon Hills get vouchers for free gymnastics lessons, or is there something in the air that makes them able to do backflips?) and diffuses the live wire with her bare hands. 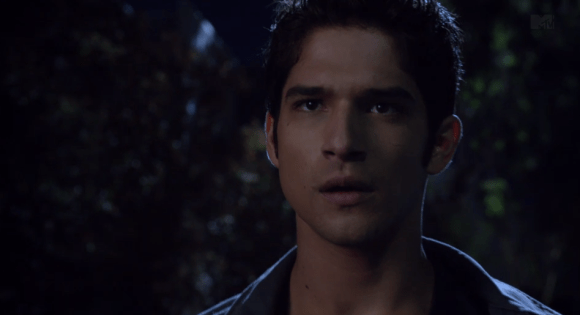 Scott is so turned on right now.

In the aftermath of the Nogitsune’s sabotage, Isaac is wounded and won’t wake up, Derek wants Scott to tell the Sheriff about Stiles (still missing, two days later—he also texted the Sheriff saying not to look for him, damn you Nogitsune) being possessed, and Kira’s mom knows about Kira’s electricity powers. Mama Kira warns her daughter not to let anyone else know, as if she did not exercise those powers in a hospital parking lot. I’m just saying, it’s not an abandoned warehouse. Even if the crowd that assembled around the ambulance wreck did so after Kira saved the day, there was still someone driving that car she flipped over and did her Kitsune magic right in front of. That driver will go home and drink to forget all the obvious supernatural shenanigans happening around her, just like the hospital orderlies will conveniently “never notice” that electrocution made muttonchops sprout on Isaac’s face. ‘Tis the Beacon Hills way.

There’s a cute scene with Allison and Scott visiting Isaac, who should be healing but isn’t. Scott takes some of his pain, because he’s a champ like that. Later, Kira tells Scott that the Nogitsune is basically chaotic evil—it’s a trickster, and it’ll mess you up if you offend it, which someone in Beacon Hills must have done. GREENBERRRRRG!

The NogitStiles lures Scott and the Twins into the basement, where he manages to convince them that he’s Stiles, because they’re ding dongs. Seriously, have none of you watched Supernatural? The demon rarely just leaves. Seriously though, all through this episode you can tell that Scott’s suspicious, but I guess he just really wants to believe that his friend is still in there. It’s naïve, but it’s also optimistic in a Scott McCall sort of way. I wanted another “I had a plan, too” moment where it came out that Scott knew the whole time that Stiles was really the Nogitsune, but, well… this episode gave us Allison tasering Peter. You can’t have everything.

Major props to Dylan O’Brien for his acting here, by the way. He’s playing Stiles possessed by the Nogitsune trying to pretend he’s Stiles, and you can totally tell what’s going on just by his line delivery. It’s Stiles, but more… deadened.

Stiles says that the sabotage at the hospital wasn’t all he did while he was possessed. He thinks he also set up some sort of trap around the country club track. The four of them jet there to save the day, and while they do manage to stop Kira and Danny in time, the Coach gets shot through the gut with an arrow. 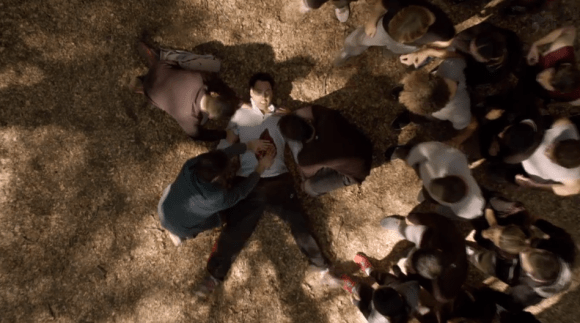 Also: This scene saw Ethan stop Danny from getting to the NogitStiles’ booby trap by tackling him to the ground and kissing him. Writers, can you please give Danny some narrative purpose this season that doesn’t involve him making out with guys? I love that Teen Wolf is a show with multiple canon LBGT characters, as opposed to characters-who-we-totally-want-you-to-read-as-LGBT-but-we-won’t-actually-say-they-are-because-queerbaiting. But Danny used to banter with Jackson, and even Stiles occasionally. So far in 3B, with the exception of a few tiny moments (Danny being the first one to sign Isaac’s get well card, because he’s nice like that), all the screen time he’s been given has revolved around his being gay, specifically him being Ethan’s love interest. LBGT people aren’t defined exclusively by their sexuality, y’know? They have other stuff going on in their lives, just like straight people do. I know, take your time, it’s shocking.

Meanwhile the NogitStiles has planted an emitter in Chris Argent’s apartment, which leads Derek there, which is really convenient because it lets him frame them both for Silverfinger’s murder! Yes, he’s dead. Shang Tsung, nooooooooo! The two of them do some bonding while they’re cuffed at the Sheriff’s office. Derek says he didn’t think Stiles was “smart enough” to frame them for murder. Derek. There’s no need to play the big bad former Alpha here. I know you’re lying. Even if this were just Stiles, instead of possessed demon Stiles, he could totally frame you for murder with five minutes of prep and MS Paint as his only tool, and you know it.

While all this is going on Lydia and Allison go to Peter to ask for banshee tips.

I do not accept this.

Has Lydia even bothered (or, rather, have the writers even bothered to have Lydia bother) calling Deaton, aka the supernatural expert? Dude’s a freaking druid. He probably has banshees on his speed-dial. He probably has banshee drinking buddies. Instead they have her go to Peter, who mentally, physically, and emotionally abused her, for help. All because Lydia feels guilty about she couldn’t help Stiles, and not because she wants to know about her powers.

She learned archaic Latin. For fun.

This is character assassination.

When they come into Peter’s loft he turns around and delivers some line like “The hunter and the banshee, here at least.” You overdramatic asshole. You were totally watching daytime TV and eating Cheetos in dirty novelty boxers when you heard them coming up the stairs, and you  rushed to wait by the window so you could do your backlit dramatizing as soon as they entered.

The saving grace of this is that Allison is having absolutely none of Peter’s bullshit, which is particularly bullshiteous this episode. “I didn’t mean to kill you when I attacked you on the lacrosse field. Anyway, you should thank me, because I brought out your banshee powers. Oh, and if I hadn’t manipulated you into bringing me back to life I wouldn’t be here to be your Yoda, so you can thank me for that, too. Let’s just ignore the fact that I was being a psychopathic little dickweed the entire time.”

If Lydia doesn’t kill him I will be so pissed.

Peter agrees to help Lydia learn how to banshee, but in return he wants her to use her powers to hear a memory that Derek’s mom stole from Peter, which is now stored in her talons.

The memory, as it turns out, is that Peter is the father of Malia Hale. So that’s how those plotlines come together. Lydia and Allison don’t figure out who the kid is until later, though. While they’re at the loft Peter tries to physically intimidate Lydia into telling him who his child is (which, again, she doesn’t know yet), but Allison’s all like LOL no and tasers him.

Show, please do not let Peter Hale having a kid be the beginning of some kind of redemption arc. I do not want to see anything Peter Hale-related that does not involve him getting tasered, slapped, or killed, preferably by Lydia. He was a fun villain for a while, but it’s past time to kill this particular white male baddie.

Back in the forest it turns out the NogitStiles prepped another bomb to go off in a school bus… or at least that’s what it wants everyone to think. Papa Kira, Action History Teacher, evacuates everyone with the exception of Jared, the carsick classmate from Frayed, who’s stuck holding the bomb.

Such bad luck this kid has. It could only be JAAAAREDDDDD!

Deputy Parrish volunteers to go see if the bomb is really a bomb, and in the process he has a cute chat with Jared, whom he manages to distract from his potential imminent death by talking about the importance of a healthy diet. Part of me wishes that I could be more cynical than I am and resist the writers’ obvious attempts to make me like Parrish. You killed Erica and Boyd. I’m still mad at you. The other part can’t help but get sucked into his dreamy eyes. I’m weak.

Back in the school Kira sees her mom summon some Oni by breaking a pair of ceremonial knives that I really, really want. Also it turns out that the bomb isn’t a bomb, and the acutal bomb is in the Sheriff’s station. When it goes off Derek shields Chris Argent with his body, even though before he was all leather-clad and broody and “Fine, I’ll stay here with you until you figure something out, but don’t expect me to risk my neck for you if something happens, GRRRRRRR.”

Scott, Stiles, and Kira get to the sheriff’s station, where Scott leeches a dying deputy’s pain, just like he did with Coach and Isaac earlier. The three of them skedaddle to the animal clinic, where they’ll be able to avoid the Oni for at least a little bit. Scott and Kira fight the Oni, and he yet again thinks she’s the best thing ever when she starts walloping the demon ninjas.

He then has approximately two seconds to be all

before an Oni stabs him in the stomach.

In the animal clinic the NogitStiles knocks Kira out, which is enough for Scott to realize, heyyyyy, you think my friend’s still possessed? Maybe? The NogitStiles then twists the sword that is still impaling Scott. You wanna be even more sad? Imagining Stiles, the real Stiles, seeing this from inside his head and being unable to do anything.

The Nogitsune feeds off pain, which Scott has been taking from people all episode, so it does the friendly thing and offers to take it off Scott’s hands. It’s a scene that’s not at all suggestive. The NogitStiles has a whole monologue that basically boils down to

And that’s when Deaton shows up and tranqs him with the letharia vulpina.

This week wasn’t as good as last week, but still, I liked it. I’m a little nervous about the way all the individual plots—the NogitStiles, Malia Tate, Peter Hale plotting his revenge—seem to be coming together into one megaplot. That’ll take some deft handling to avoid the Pit of Plot Holes, and my faith is still somewhat shaken after 3A. I’m sure you understand. Just focus on a few things at a time, writers.