Ted Cruz’s Nerdy References Continue to Be Embarrassing (for Us, and for Him) 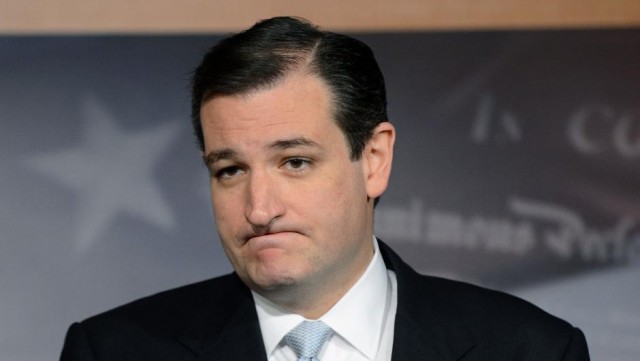 All right. I accept it. Ted Cruz is a real nerd, and I hereby will stop gatekeeping his nerdery by presuming that he doesn’t truly love all things sci-fi. Who am I to judge? Nerds come from all backgrounds! (And all political affiliations.) Given all of the nerdy references that this Republican Presidential hopeful has been dropping lately, it’s become crystal clear that he’s one of us.

Except … not. He’s a nerd, all right, but I doubt Mr. Cruz scrolls through our RSS feed. The heroes that Cruz loves best—Captain Kirk, Han Solo, Tony Stark, and even Rorschach—are not exactly the same ones that we might list as our favorites. Still doubtful that those are really his heroes? Apparently, a teenaged Cruz used “Stark Enterprises” as his inspiration for the name of his small business, “Cruz Enterprises.”

But that was then! Maybe adult Cruz wouldn’t take a cue from Tony Stark’s masculine bravado. But he did recently compare Obama to the Terminator, and in a different speech, Cruz compared Obama to Darth Vader. Those are the villains that current-Cruz pictures himself fighting against.

Let’s analyze those references a little, as we nerds are wont to do.

First off, the Terminator films clearly represent a fear of technological progress, as well as concerns that corporations don’t actually care about people so much as they care about advancement at all costs. You might even say that the Terminator is the worst possible end result of that whole “corporations are people” law. Except, that’s not really Obama’s deal, so I think Cruz must be more concerned about the “unstoppable” progress that Obama’s actions represent—especially given that Cruz used his Terminator analogy to criticize Obamacare. The response to universal health care can only be that we all hoard guns underground and prepare for the eventual apocalypse. Or … we all get affordable medical treatment, and the inexorable march towards technological progress continues unabated. Terrifying!!

As for the straightforward world of Star Wars, Darth Vader and Han Solo are two of the only characters who arguably show a little grey area in terms of morality; both men struggle with their own values over the course of the films, so it’s actually pretty interesting to see Cruz use them as his basis for comparison. But the analogy doesn’t hold water when you look at Cruz’s background; given his well-connected parents, Cruz seems more like one born with an advantage (like the Force! of money, that is), rather than a scrappy outsider with few resources like Han Solo.

Anyway, Han Solo isn’t even the guy who confronts and eventually defeats Darth Vader. I guess Cruz comparing himself to Luke would have been even weirder, though, given the implications. As for whether Obama bears even the tiniest lick of similarity to Vader … that’s such a stretch that it’s hard for me to even know where to begin, so I’ll leave that to you, commenters.

That was a fun analysis session and all, but Cruz’s penchant for reframing nerdy media into conservative talking points is more embarrassing than it is endearing. The stories Cruz loves do make important political points, but it seems like Cruz is just picking and choosing what he thinks sounds cool to make a point, rather than considering the meaning of the media to which he alludes. Maybe his references will work for conservative nerds who like to picture themselves as the hero of a power fantasy … but they definitely don’t work for me.

I do have some idea of which sort of nerd these talking points might appeal to, though—the kind of guy I avoid at conventions, who tells me that Batman had the right idea and that harassment policies are just needless hand-holding. We’ve all met nerds like that, and they definitely are nerds. I guess Ted Cruz is trying to use his “nerd cred” to get their votes, but goodness knows those aren’t the only nerds out there.

(via Vocativ, image via Nation of Change)