Bigots: we rescind your invitation to this show. Duh. 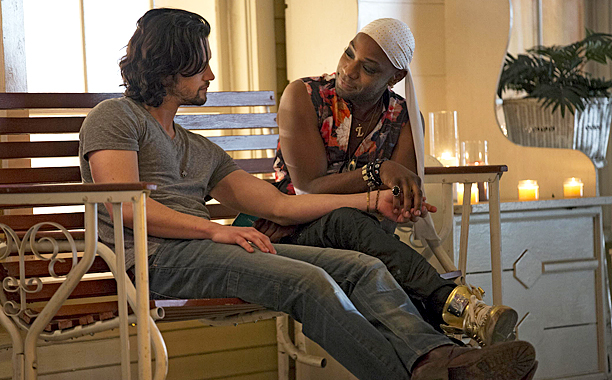 HBO has used supernatural phenomena to satirize conservative America (and show off well-toned heinies) since True Blood first premiered in 2008, but the show’s politics apparently came as a surprise to actor Luke Grimes and Senator Ted Cruz. Spoilers for Season 6 and 7 below.

True Blood fans might have noticed a slight difference this season in baby vamp Jessica’s boyfriend James (and it really is slight–Season 7 James, portrayed by Nathan Parsons, is a doe-eyed carbon copy of Luke Grimes, who originated the role). Grimes abruptly left the show back in December, citing “the creative direction of his character,” although the actor’s publicist later told Buzzfeed the decision to leave “had nothing to do with storylines, which he [Grimes] had not been privy to at the time.” Anonymous reports claimed that after reading through the final season’s script, the actor objected to James’ romance with another man. In a recent interview with Vulture, Nelsan Ellis, who portrays fan favorite Lafayette, had some strong words for the actor who would have played his love interest.

As a show, True Blood has always been aware of its power to make a statement. Many of the show’s characters grapple with “coming out of the coffin,” the series’ final season is based around an allegory for AIDS, and last week’s episode even poked fun at Ted Cruz and the Bushes, prompting a statement from the Senator himself:

Of all the places I never thought to be mentioned, HBO’s True Blood vampire show would have to be near the top of the list. Sunday night, they aired a misogynist and profanity-ridden episode where Texas Republicans are murdered attending a “Ted Cruz fundraiser.”

Well, I’m sorry to have lost the vampire vote, but am astonished (and amused) that HBO is suggesting that hard-core leftists are blood-sucking fiends….

Some of Cruz’s accusations against the “True Blood vampire show,” are intriguing, but I’m sure listening to his reasoning would be exhausting.