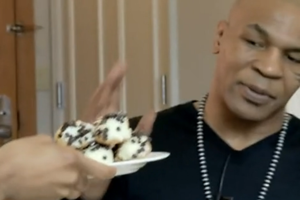 The Atlantic Wire has discovered a fascinating interview with former heavyweight champion Mike Tyson over breakfast– a segment at Versus network called “Tea With Tyson,” where a discussion on strength and weaknesses reveals Tyson’s complicated relationship with his culinary arch-nemesis, the cannoli.

Host Reese Waters seems to have intended to initiate a polite philsophical conversations on the strengths and weaknesses of the fighter, but by casually offering Tyson a cannoli in the process, he triggered the reanimation of a long-term feud:

“Let me tell you, I grew up — I hate cannolis. I hate to watch my mentor choke and still talk of these things. He loved it. They’re too sweet, you know, I just never got into these things. They’re like a curse to me. They’re just horrible… I examined. And that’s how I come under those circumstances with the relationship with Mike Tyson-cannolis. We have a relationship here. It’s not as if I just saw them and I judged them. I’ve had experience with them, I’ve had engagements with them, and it didn’t turn out pretty nice.”

It seems impossible, at moments like this, that anything in Tyson’s life will stop him from being in the public eye, at least in some manner or another. Watch the surreal conversation below: