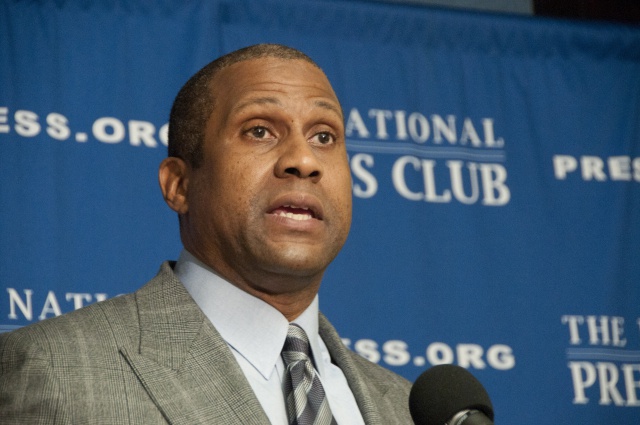 Yesterday, Variety put out an exclusive statement about the suspension of Tavis Smiley’s program from PBS over alleged sexual misconduct.

“Effective today, PBS has indefinitely suspended distribution of ‘Tavis Smiley,’ produced by TS Media, an independent production company,” the public broadcaster said. “PBS engaged an outside law firm to conduct an investigation immediately after learning of troubling allegations regarding Mr. Smiley. This investigation included interviews with witnesses as well as with Mr. Smiley. The inquiry uncovered multiple, credible allegations of conduct that is inconsistent with the values and standards of PBS, and the totality of this information led to today’s decision.”

According to the information shared to Variety, PBS hired a lawyer named Sarah Taylor Wirtz, from the firm MSK, to look into Smiley’s history after hearing allegations of misconduct from staffers. MSK looked into the claims by interviewing 10 witnesses “of different races and employment levels in Smiley’s organization, most of them former staffers.” What they found is that Smiley has a history of dating “subordinates” at his job.

Some witnesses interviewed expressed concern that their employment status was linked to the status of a sexual relationship with Smiley. In general, witnesses described Smiley as creating a verbally abusive and threatening environment that went beyond what could be expected in a typical high-pressure work environment. Several expressed concerns about retaliation.

Apparently, Smiley was not aware that anything was going on, and according to the statement he released via Facebook, he found out about his suspension and the allegations against him from Variety. Smiley also said: “I have the utmost respect for women and celebrate the courage of those who have come forth to tell their truth. To be clear, I have never groped, coerced, or exposed myself inappropriately to any workplace colleague in my entire broadcast career, covering 6 networks over 30 years,” and that “If having a consensual relationship with a colleague years ago is the stuff that leads to this kind of public humiliation and personal destruction, heaven help us.”

This kind of information about Smiley isn’t entirely new, as Jacques Hyzagi, former senior producer on The Tavis Smiley Show, wrote in the Observer back in February that Smiley’s whole persona was a mask for Tavis’ misogyny that was “always creeping around, barely camouflaged by Midwestern good manners in line with the most duplicitous guys who always open doors, buy flowers and carry luggage until their girlfriends end up scrambling for some hotline 800 number.” In the article, Hyzagi brings up a woman named “Blanca,” who Smiley allegedly brought with him as a “fuck buddy,” and who he calls “stupid.” He apparently also asked Hyzagi to claim Blanca was his girlfriend if anyone were to bring her up.

While the allegations against Smiley are new and still being processed by both him and the people working at PBS, it serves as a reminder to men in power: Once you decide to start dating people who work for you, there is a power imbalance that never goes away. You are not just their “lover” or “fuck buddy” or whatever you’d like it to be in your mind. You are the person who has the potential power to make or break their career.

Men in power need to get better at understanding that, and if it’s too hard of a concept for them to deal with, then it may be time to start dating outside of the office exclusively. Respect for women also means respecting their ability to not be afraid at work.