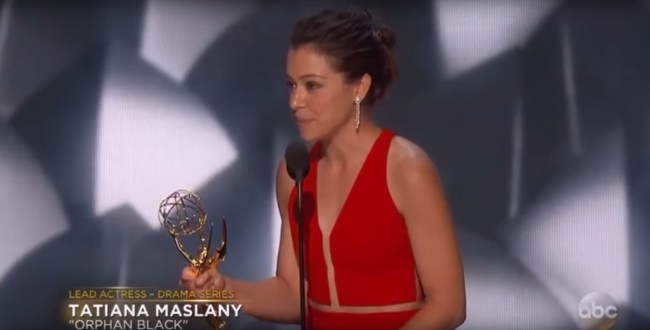 Well, it’s about damn time! Tatiana Maslany, after having been snubbed by the Academy for her first season on Orphan Black and nominated for the first time last year only to not earn her well-deserved statue, finally took home the Emmy for Outstanding Lead Actress in a Drama Series last night for playing the entirety of Clone Club! Meanwhile Rami Malek, who plays the idiosyncratic Elliot Alderson on Mr. Robot, won Outstanding Lead Actor in a Drama Series in his first nomination. It seems that sci-fi television is finally getting some long-overdue respect!

There were plenty of wins to be happy about at last night’s Emmy Awards. Kate McKinnon’s well-deserved win for Outstanding Supporting Actress in a Comedy Series for her work on SNL, Aziz Ansari and Alan Yang’s win for Outstanding Writing for a Comedy Series for the “Parents” episode of Master of None, and Regina King taking home another Emmy for Outstanding Supporting Actress in a Drama for her work on American Crime. However, the evening was especially sweet for fans of smart, well-written, low-fi science fiction.

Check out Maslany’s acceptance speech as well as her backstage interview below:

It was a thrill to see Tatiana Maslany win, having witnessed her incomparable talent on Orphan Black for the past three seasons. The fact that she wasn’t nominated for her first year on the show shocked fans, because it was so clear that, while other actresses were brilliantly crafting one role, Maslany was brilliantly crafting several, all on the same show, all at the same time. Each Leda clone is finely etched, so much so that you often forget that for a lot of the show, Maslany is playing scenes against herself.

Much of the problem seemed to be that, while fans knew how brilliant Maslany’s performance was, the BBC America series wasn’t getting in front of the mainstream eyeballs of Emmy voters. It’s a small show that didn’t have the budget for as big an awards push as its competition. However, it seems that three years later, word has finally gotten around town, and the lynchpin of one of television’s most brilliant series has gotten her just deserts.

It’s all the sweeter, because the show is female-centric. As Maslany says in her acceptance speech, “I feel so lucky to be on a show that puts women at the center.” We’re lucky to be able to watch it.

Meanwhile, it was awesome to see Mr. Robot get so much Emmy love this year, having been nominated for Outstanding Drama Series, Lead Actor, Writing, Music Composition, Casting, and Sound Mixing. However, it was Malek’s performance (along with Mac Quayle’s music composition) that impressed Emmy voters the most.

As Malek says in his backstage interview, “As not the ‘typical’ leading man and to have come home with this I think speaks a lot about where we’re headed, and I think we can just keep going further in that direction. Obviously not just limited to entertainment, but socially and politically to continue to strive to be as progressive as possible.” Not only is Mr. Robot a brilliant, thought-provoking show, but it has at its center an American-Egyptian actor whose parents emigrated from Egypt, and that heritage is reflected on the show. The show’s creator, Sam Esmail, is also of Egyptian descent.

What’s more, the character of Elliot is someone who suffers from mental illness (social anxiety disorder, dissociative identity disorder and clinical depression), which is rare in a protagonist, and the character is written honestly and without sentimentality or stigma. He’s sometimes on his meds, he’s sometimes off his meds. He’s got problems caused by the unique way in which he sees the world, but he’s also very often the smartest, most insightful person in the room.

It goes to show how greenlighting series from points of view not usually heard from can create the most interesting television. 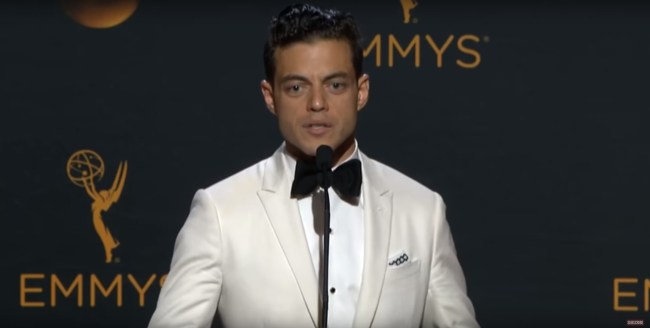 It’s also great to see sci-fi get so much attention, specifically in lead acting categories. So much brilliant work on science fiction series hasn’t been recognized by the Academy, because I think that, no matter how popular sci-fi is or has been, it’s still seen as “fluff,” and there’s an accepted truth that sci-fi is the home of less than stellar acting and writing, despite the complex subject matter with which it often wrestles.

Yet, Orphan Black and Mr. Robot feature the best of both, and are two of the most intelligent shows on television right now. They’re also both on smaller cable networks (BBC America and USA respectively), which seem to allow their shows to take more chances. Here’s hoping the rest of the broadcast networks and cable behemoths are paying attention. If you let talent from marginalized communities create in this medium, they can accomplish brilliant, award-worthy things that also excite audiences.