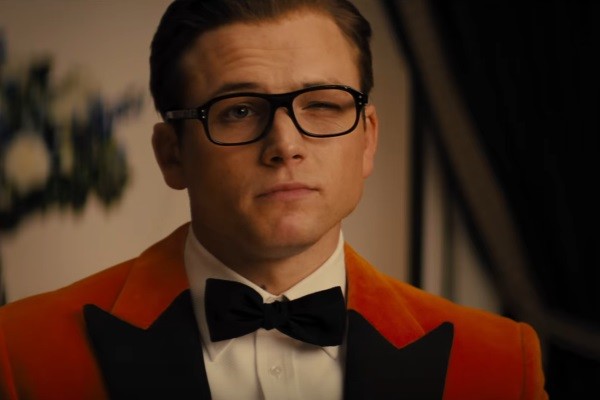 If you’ve seen Kingsman: The Golden Circle, you know exactly which scene I’m talking about. And it’s all director Matthew Vaughn’s fault.

Spoilers for Kingsman: The Golden Circle.

We expect a certain amount of envelope-pushing from the over-the-top Kingsman installments, and after the first film we sadly expect a certain amount of sexist nonsense and the use of women’s bodies as set pieces and plot devices. Even so, I was astonished at how far the new movie went with a totally unnecessary and gratuitous part that added nothing plot-wise and seems to exist to induce outrage and, I don’t know, show what a contrary “bad boy” director Matthew Vaughn is in his own mind.

In my review of The Golden Circle, I discuss The Scene that never should have been written, let alone filmed:

An interlude at a music festival creates a cringe-worthy extended set-up where Eggsy must perform sexual acts on another throwaway woman—who stands around in skimpy underwear—that is, once again, played for crude laughs. It will no doubt generate a lot of laughter in theaters, but I sat there thinking that Matthew Vaughn hadn’t learned any lesson from the Princess Tilde fiasco after all. If anything, this scene is even more exploitative. It’s disappointing, to say the least, that we’re here again. The movie could have avoided this whole part entirely and still more than succeeded, but it went there anyway.

I was hardly alone in how I felt about this scene—there’s been a lot of angry online chatter, and as our commenter The Vorpal Pen wrote, at their screening, the scene “had people literally groaning.” It turns out that lead actor Taron Egerton was also so uncomfortable with what his character Eggsy is made to do that he declined to even be the one on film for it. The hand that we see getting intimate with actress Poppy Delevingne actually belongs to her husband.

To further elaborate, Eggsy must plant a tracking device on the woman, Clara, who is dating one of the bad guys. In a world where people can survive point-blank shots to the face via magical advanced medical technology, this miraculous tracker can only be deployed on its target via mucous membranes. Sure, sure. Cool, cool, this totally isn’t the worst plotting in the history of ever.

So Eggsy has to seduce Clara—even though he wants to stay loyal to his girlfriend—and he fingers her to plant the tracker, then turns tail and flees as fast as possible. Vaughn even felt it was important to get a camera-eye view traveling up inside Clara’s genitalia so that we can be assured the tracker trick was a success. I hope this goes down as one of the most tasteless, crude, and offensively unnecessary scenes ever filmed. Clara’s body is invaded and used because Matthew Vaughn delights in imagining himself some kind of auteur of cheap, sexist moments created to shock and maybe because he delights in sneering at the anticipated reaction of those “bloody feminists.”

Screen Rant asked Egerton about the scene at a Golden Circle junket, and he responded as diplomatically as any actor at a press scrum can in discussing their director’s choices:

It’s what Matthew [Vaughn] does, it’s his signature thing. He likes to do something that shocks. In Kick-Ass it was Chloe Grace Moretz saying the C-word, in Kingsman 1 it was the bum shot of the Swedish princess, and in this one it’s the thing. And, you know, it’s not to everyone’s tastes, but it certainly gets people talking. All it is is explicitly showing what Bond alludes to and says in a double entendre kind of way.

There you go, folks: I hope that under Vaughn’s name in future film history books it reads, “Vaughn’s signature thing: lewd, tawdry scenes of dubious intent that trade on sexist tropes and exploit female bodies.”

But while Egerton is attempting to defend Vaughn’s choices in this instance, when The Golden Circle was filming, he was so uncomfortable with the level of intimacy required that the actress’ husband was brought in to substitute. (I’d love it if we could also hear from Poppy Delevingne and how she felt about the scene, which she had to film half-naked.) Egerton told Screen Rant:

It was a day that I was anxious about. The shot in the first film I was so anxious before we did it and Matthew didn’t tell me that I wouldn’t actually be in the shot. The way it was described in the script it was like ‘I’m going to do what?’ But it wasn’t me, it was a POV. In this one, I’m in the shot and I said to Matthew ‘I’m not comfortable doing this’. So it’s not my hand – it’s Poppy [Delevingne]’s husband’s hand. He saved the world.

Hey, Matthew Vaughn, just a thought: when your star is uneasy about filming something to the point of needing a stand-in from the actress’ husband, take that as a goddamned sign that the scene didn’t need to be filmed in the first place.

Let us not forget that Vaughn has been eyed as a possible director for a Man of Steel sequel. Can’t wait to see Lois Lane run around in her underwear and Clark Kent going undercover in a strip club or something. Can’t. Wait.