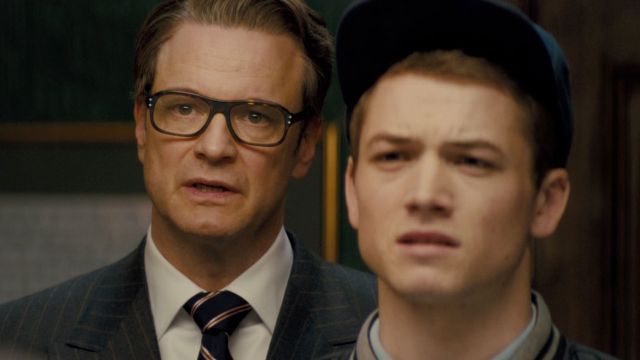 Well, this is a bummer. Spoilers ahead if you haven’t watched Kingsman: The Secret Service yet, or if you prefer to not sully your day with some grossness.

After being asked during a recent Entertainment Weekly interview what inspired “the gag” at the end of the film Kingsman director Matthew Vaughn spoke about wanting to subvert spy film tropes:

If you’ve noticed, this is my Spinal Tap of trying to find 11 with every scene. What happened there was I studied all the old movies, especially the Bond ones. At the end of Moonraker, he’s floating around in space on Dr. Goodhead, and they say, “Bond is attempting reentry.” In The Spy Who Loved Me, he says he’s “keeping the British end up.”

Although I agree with Vaughn that the idea of changing gendered expectations for characters in a specific genre can be really valuable, he went on to say:

The innuendo is pretty strong and always comes from the men. I just thought it would be great to turn it on its head by having the woman say it. I actually think it’s empowering. Some bloody feminists are accusing me of being a misogynist. I’m like, “It couldn’t be further from the truth.” It’s a celebration of women and the woman being empowered in a weird way in my mind, which will cause a big argument again I’m sure. It’s meant to be tongue-in-cheek and crazy.

[…] I was surprised when people are saying to me, “I loved the movie. I think it’s great, but I was offended by that.” I said, “Really? That’s more offensive than exploding heads, massacres in church, swearing, people being cut in half?” I was like, come on. It’s just a joke. It’s not even graphic […] For the 20 percent who were offended by it, there are 80 percent who are rolling around laughing so hard. Those 20 percent of people just need to lighten up a little bit. It’s about pushing boundaries and having a bit of fun. It’s not meant to be offensive, and it’s definitely not misogynist or any attack on women. That’s for sure.

Although personally I do think the “joke” failed in that it didn’t account for the way women are portrayed overall in media and not just specifically in genre films (sure, men might be responsible for more of the “innuendo” in spy movies, but female characters are so frequently and unrealistically sexualized as a whole that the moment really just objectifies Princess Tilde), I also think Vaughn’s defense of the scene is way more disappointing than the actual scene itself.

So an estimated 20% of your audience didn’t have the response to a joke that you would have liked? That’s fine, and probably unavoidable. But telling viewers what they’re allowed to be offended by actually makes you seem like more of a jerk, especially when you’re reinforcing harmful stereotypes about feminists but name-checking female empowerment in the same sentence.

Incidentally, viewers can “get” the mechanics of a joke and still be offended by it; disappointed audience members don’t need Vaughn mansplaining to us that his intentions were to “find 11,” be “tongue-in-cheek and crazy” and “celebrate women in a weird way in my mind.” It’s actually possible to understand all of that and still think the scene failed, in the same way it’s possible that a joke objectifying a female character in a real-life way that many women identify with might be more upsetting than the film’s depiction of other kinds of violence.

I must resort to Kevin Sorbo to express my dissatisfaction: