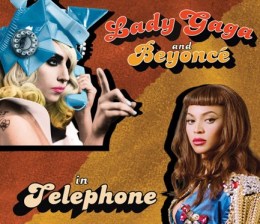 So: After endless anticipation, Lady Gaga‘s music video for “Telephone” is here, featuring Beyonce. True to form and expectation, it’s really weird: In a good way, though, IMO.

But then… there’s the stylization itself. Lady Gaga told E! that “There certainly is a Tarantino-inspired quality in the video;” while there are other influences swimming around in there (we’d like to propose Twin Peaks), the Tarantino shines through the most.

You may recall that Beyonce’s “Video Phone” started off with a reference to the slow-mo walk in Reservoir Dogs; where’s the Tarantino in “Telephone”? 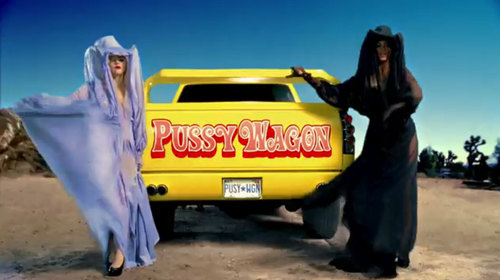 1. The “Pussy Wagon” from Kill Bill

The most straightforward Tarantino reference in “Telephone” comes from the “Pussy Wagon” that Lady Gaga and Beyonce drive; Uma Thurman steals and drives the same one in Kill Bill Vol. 1. Like, literally the same one: Tarantino lent Gaga the original when they were discussing the video.

Also, the girl-on-girl prison fights at the start and bright, oversaturated colors throughout call Kill Bill to mind.

Gaga addresses Beyonce as “Honey Bee” before they pull off their (spoiler alert) poison murder spree in the diner; this seems like a pretty clear reference to “Honey Bunny,” the nickname given to Yolanda, one of the two robbers in the famous diner scene Pulp Fiction.

The diner setting itself is very Tarantino: Reservoir Dogs also opens up with an extended diner discussion. 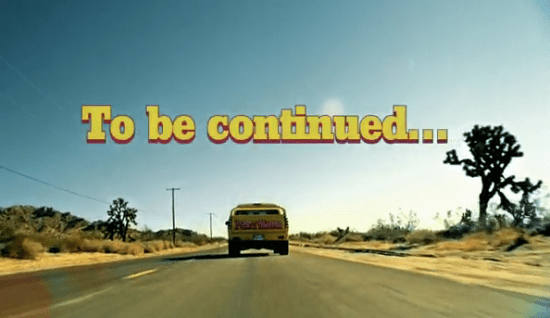 3. “To be continued:” famous John Travolta line in Pulp Fiction

While we’re on Pulp Fiction, the “To be continued…” title card at the end of “Telephone” got us thinking about Pulp Fiction‘s epilogue. “To be continued” is a classic line for ending comic books or B-movies on a cliffhanger, but it’s also a classic Vincent Vega (John Travolta) line that caps off Pulp Fiction‘s anticlimax (and is endlessly debated by film geeks as such). From the script: (again, there be sorta spoilers)

JULES If you find my answers frightening, Vincent, you should cease askin’ scary questions.

VINCENT When did you make this decision — while you were sitting there eatin’ your muffin? JULES Yeah. I was just sitting here drinking my coffee, eating my muffin, playin’ the incident in my head, when I had what alcoholics refer to as a “moment of clarity.”

VINCENT I gotta take a shit. To be continued.

Vincent exits for the restroom.

Kinda speaks for itself; the fonts and hues are different, but the effect and relative proportion to the screen are similar. Death Proof has somewhat similar credits, though it uses a black drop. 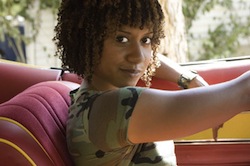 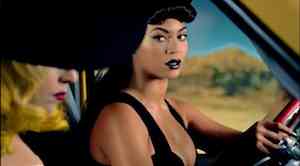 Yes, zany, pop culturey and idiomatic banter is a Tarantino staple, and “Telephone” rides that wave with lines like “once you kill a cow, you gotta make a burger.” But which genus of Tarantino banter is it?

We’re going to go with the sorely underappreciated Death Proof, Tarantino’s fantastic tough-girls-in-cars-fighting-Kurt-Russell flick that got the short end of the stick because it was double-billed with Planet Terror in Grindhouse. Some (presumably male) viewers complained that it felt too much like The View because of all of the girl talk, but it was balanced out with kickassery, much like “Telephone;” also, there are few shots of Beyonce driving that kinda look like Death Proof shots of Tracie Thoms in her own red-and-yellow car.

Bonus: We can’t think of any Tarantino analogues for two of the coolest, most random shots in “Telephone” — the “Cook n’ Kill” recipe and the random plug for PlentyofFish.com (an actual dating site); can you? If not, we bet he wishes he’d done them first. Also, there’s GOT to be an Inglourious Basterds reference in there somewhere, though the Bear Jew was sorely absent.

Final: here’s the official video for “Telephone,” courtesy of Vevo: