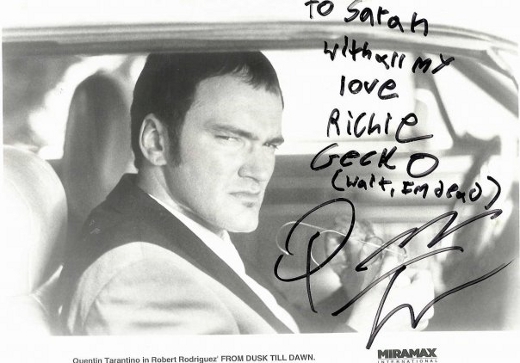 Bad-ass young fangirl story of the day: one thirteen-year-old Sarah wrote Quentin Tarantino himself in 1996, shortly after the filmaker had appeared in Robert Rodriguez‘s From Dusk ‘Til Dawn, a very strange, kind of inappropriate for thirteen-year-olds movie that starts like a heist flick and about half way through makes a very abrupt transformation into a slasher vampire flick.

And naturally, Tarantino wrote her back.

Thank you for your very lovley letter. It’s the best letter I’ve gotten all year long. I’m glad you loved “Dusk”, it was one of my favrote times making a movie. And I feel my best performance so far. It’s cool to hear a girl into horror flicks.

Do you know about Itallion horror film maker Mario Bava? He did Blood and Black Lace, Black Sunday and Black Sabbith. He’s one of my favrotes. I read your letter to Mira, she loved it too. Write me anytime. I can’t wait for you to get your hands on a camera too.

With all my love

P.S. Sarah, since you liked Dusk so much, coming out soon is a movie we did about the making of “Dusk” called “Full Tilt Boogie”. It shows how much fun we had. I hope you like it.

Would now be a good time to mention that Tarantino’s character is a rapist and murderer? But we’re not trying to be down on Sarah. I’m not sure I could have handled From Dusk ‘Til Dawn at thirteen, but that doesn’t mean nobody can. And to not only love horror movies but to write a letter to your hero that gets an answer? That’s awesome.

We just hope her spelling and handwriting was a bit better than Quentin’s.

To see scans of Tarantino’s letter, and a corresponding letter from his then girlfriend Mira Sorvino, check Letters of Note.