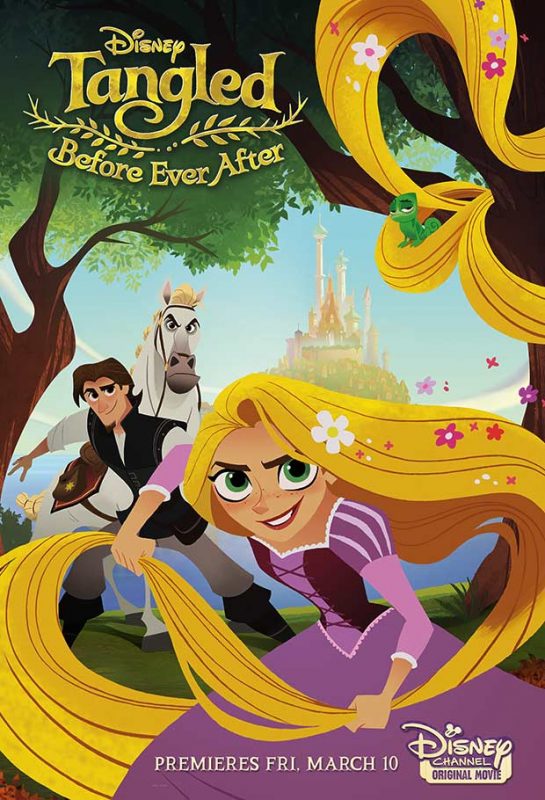 Here’s something to look forward to! The TV movie kick-off to the TV series based on Tangled, which is titled Tangled: Before Ever After, will be coming to the Disney Channel on Friday, March 10 at 8 pm/7 pm central. Just to review the already-complicated timeline of all things Tangled, the TV movie will be set after the events of the movie Tangled, but before the animated short depicting Rapunzel and Eugene’s wedding day (which is titled Tangled Ever After, and is available in full on YouTube).

Here’s the official synopsis via TV Line, which explains in part why Rapunzel’s hair has suddenly re-appeared in Tangled: Before Ever After:

“Rapunzel grapples with both the new responsibilities of being princess and the overprotective ways of her father. While she whole heartedly loves Eugene, Rapunzel does not share his immediate desire to get married and settle down within the castle walls. Determined to live life on her own terms, she and Cassandra embark on a secret adventure where they encounter mystical rocks that magically cause Rapunzel’s long blonde hair to grow back. Impossible to break and difficult to hide, Rapunzel must learn to embrace her hair and all that it represents.”

Mandy Moore and Zachary Levi will be reprising their voice acting roles as Rapunzel and Eugene, and the movie (and subsequent TV series) will also be introducing us to a “tough-as-nails lady-in-waiting” named Cassandra, to be voiced by Broadway star Eden Espinosa. We already got to meet Cassandra and see a bit of her characterization, as well as the new 2D art style on display in these new Tangled properties, in the trailer that came out earlier this month.

Since Rapunzel has short brown hair in Tangled Ever After, we know that she’ll probably be losing her golden locks once again by the time the TV movie ends… meaning that she may have her short hair by the time Tangled: The Series premieres. That premiere will also be on the Disney Channel in March, by the way, on Friday, March 24 (7:30/6:30c). Be sure to check out the TV movie first, though, since it sounds like it’ll be introducing us to the new cast of characters… and, of course, explaining the whole up-and-down situation with Rapunzel’s hair.