The DMV Wants Everyone To Have Talking Cars

Too Fast, Too Furious, Too Sentient 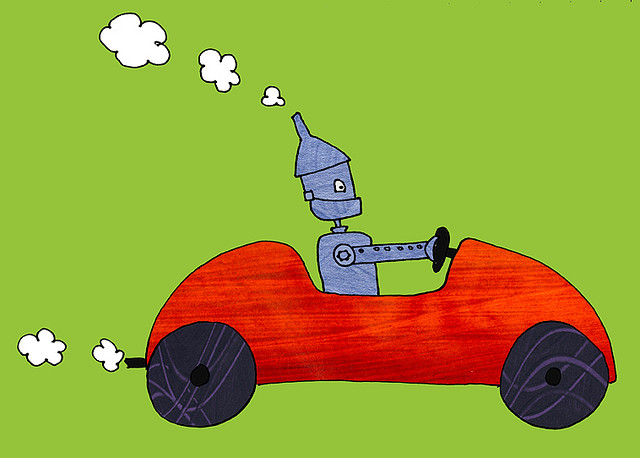 This week the US Department of Motor Vehicles announced they were moving ahead with wider implementation of V2V (Vehicle to Vehicle) communication. The technology could prevent countless crashes, but more importantly, now we obviously live in the future and soon we’ll all have robot butlers.

The DMV announced on Monday that they foresee V2V becoming standard safety equipment, with Transportation Secretary Anthony Foxx saying its use will one day be as commonplace as seat belts or airbags.

We’re really excited for the life-saving capabilities of cars that talk to each other, but it does give us some pause that the DMV has to be involved with this. Should a bureaucratic body incapable of properly using stanchions be controlling a race of robocars?

Regardless, it looks like we won’t have to deal with an army of DMV bureaucars for some time now. It’s unclear what has to be done in the immediate future to start implementing this technology more widely, although V2V has been used in the US as far back as 2012. In August of that year the Department of Transportation launched the Safety Pilot “model deployment” project, equipping 3,000 vehicles with V2V technology.

David Strickland of The National Highway Traffic Safety Administration said of the experiment:

“Vehicle-to-vehicle communication has the potential to be the ultimate game-changer in roadway safety—but we need to understand how to apply the technology in an effective way in the real world.”

Results from the pilot will be available for analysis later this year, and may assist the DMV in discovering how to practically implement the life-saving technology.

If the idea of your car communicating with others of its kind fills you with unease, then brace yourself: in certain states, self-automated cars are also already being used to prevent accidents. California and Nevada have already legalized self-driving cars, and Florida and Washington DC are currently testing them. (Florida, I’m sorry, but until you get your shit together, no robot cars. You need to earn those.)

In his Gizmodo article What’s Keeping Self-Driving Cars Off The Road, Adam Clark Estes estimates that

a future where just 10 percent of the cars on the road are autonomous would prevent 211,000 accidents every year. If you bump that percentage up to 90, the number of crashes avoided soars to 4,220,000.

Those estimates are staggering, but who knows if they’ll be able to assuage technophobe’s fears of the coming Car Talk revolution. Hacking, privacy laws, and cost effectiveness are all concerns for self-driving cars as well as V2V communication.

While bigwigs wrangle with the politics of sentient robot life-saving future cars, I’m more concerned about the noise pollution caused by car conversations like “halp I’m in a ditch”, “the environment blows, right?” and “toot toot beep beep I’m a hummer and I don’t give a shit.”