Playable Taliban in Multiplayer Is Just Not a Good Idea 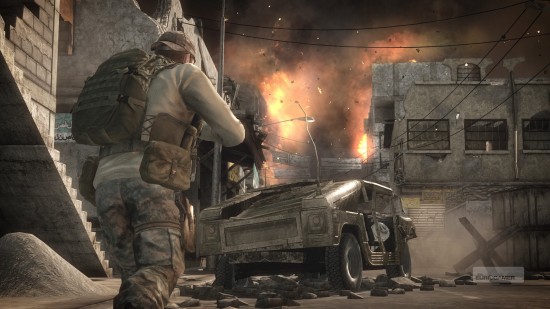 News that Taliban fighters would be one of the playable sides in the online multiplayer of the next Medal of Honor game has been greeted with apprehension by some, who voiced legitimate concern over the interactions between the online multiplayer FPS community with something as sensitive as the current and ongoing war in Afghanistan.

When asked about gamers feeling uneasy playing as Taliban, gamemaker DICE has responded:

“I think it is a fair point,” said producer Patrick Liu… “We do stir up some feelings, although it’s not about the war, it’s about the soldiers.

“We can’t get away from what the setting is and who the factions are, but in the end, it’s a game, so we’re not pushing or provoking too hard.”

Fair enough, I think … if there was a point to be taken from that bit of PR massaged hemming and hawing.  But expecting the feelings and message evoked by your single player campaign, however impartial or nuanced, to carry over into the anonymous and hyper-competitive realm of the online FPS is naìve, at best.

The problem with picking apart a my own apprehension about this MoH is twofold, and I don’t pretend to have the answers.

Primarily, there is the problem that arises when a game maker says “it’s just a game.”  Because we say it all the time, don’t we?  To everyone who tries to claim that video games cause people to be violent.  I’m not worried about MoH turning people into religious extremists.  My problem with it is one of taste, ultimately.

I don’t think it’s tasteful to give your community an opportunity to be incredibly offensive, and then sit back and say that that’s just what happens in a live online experience.  If you were really committed to depicting an ongoing war in an objective, non-glorifying way, that wouldn’t be a part of the experience.  That’s probably not exactly what the MoH series has as its number one, though.

But should it?  Should we be playing as Taliban?  Should we be gaining entertainment by playing the part of real, current soldiers?  Is it better to play a war game about a conflict that is over?  What’s the difference, really, between playing a game about the current war in Afghanistan and Iraq, and a game about WWII, Korea, or Vietnam?

Should we be exploiting real conflicts for entertainment at all?

This is a tough question.  There is clearly a point at which we don’t really care if we’re using an actual conflict for entertainment, as long as it’s old enough.  Nobody could argue with a game based on the battle of Thermopylae, and even WWII games get a free pass (thanks again to the Nazis for just being so damn evil).  But where is the cutoff?  We make games about Vietnam, a brutal war that irrevocably changed American culture, from which there are still living veterans.  Is this cutoff based on anything approaching rationality, or is it just about individual taste?

I’ll cut myself off here, before this becomes a complete ramble.  But these are the kinds of things that the video game industry should be struggling with and thinking seriously about.  “It’s just a game” is factually true, but in practice all it does is dodge responsibility.