“I Need Everybody Complaining About How Impractical Domino’s Hair Is to Take 10,000 Seats” 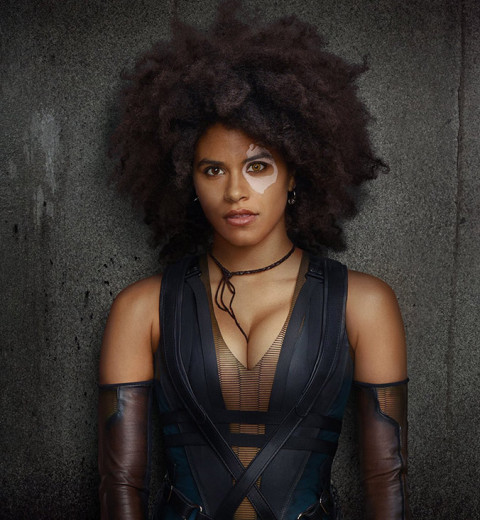 We got our first look at Zazie Beetz as the mutant Domino in Deadpool 2, and she looks incredible: confident, ready to kick ass, beautiful and deadly. But of course, this being the Internet, criticisms started to pour in of the “well, actually, she’s supposed to look like this” variety. And a majority of them are fixated on Domino’s hair.

Some people just know how to work a red carpet. #Domino #DeadPool2 pic.twitter.com/llCc8JfKT6

The lovely Marlene Bonnelly is an expert cosplayer, Youtuber and all-around master-level geek who is the EIC of comics.tumblr.com and tweets at @ilikecomicstoo. We used to work together, and I often view Marlene’s posts as a bellwether of what’s abuzz in comics fandom. Marlene’s sarcastic—and rightfully angry—recent post about Domino caught my eye:

But, honestly. Domino’s afro is SO distracting. How could anyone
fight
with that hair?
Right? pic.twitter.com/zbvGPfH3Ct

To drive the point home about the hypocrisy of people bleating that Domino’s natural afro was “impractical,” but just because it’s hard to fight in, really!!!1! — Marlene made another post on Facebook that was perfect:

The final picture in the set is this: 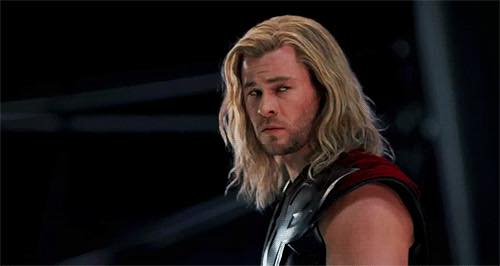 You’ll notice there have been no such involved conversations and concern-trolling that fighting with an “impractical” hairstyle is impossible to do when the hair is blond or red and attached to the likes of a Jean Grey. One could argue that Natasha or Wanda or Jean or T H O R could really benefit from a more “practical” bob if they were real life people whose long flowing locks might be a hazard in a fight, but they are not real life people and they’re allowed to have any aesthetic that they damn well please. These are movies about super-powered people and aliens and mutants. Their hairstyle should be the last thing examined for believability. We love these movies because they’re about people who can do things that we cannot.

I just don’t think it’s dope. I think it’s an odd choice. It’s also impractical for an assassin, if you ask me…

And yet in Beetz’s case it’s somehow all about whether Domino would be hindered by her hairstyle. People are quick to claim they don’t care about her skin color but that her gorgeous natural hair is a step too far. Geniuses on Twitter chime in that she needs to have long and straight hair like the drawn character—as though every comic character iteration on screen must adhere to a carbon copy rule or else the world will spin out of alignment.

Why can’t we have both? They could have made her closer to comic accurate.

The petty bickering is coming out about Beetz’s hair being “distracting” and not true to the character who is a mutant with the power of affecting probability in her favor. Domino’s primary superpower is literally improbably fantastic good luck, but let’s discuss the practicality of her hair style. Actually, let’s not. Black women have had their hair policed and their styles critically judged for centuries in America. To see this “I’m not racist, but” bullshit emerge after the first look at a character is terrible and makes me want to set the Internet on fire once and for all.

Marlene’s post was in response to the infuriating comments she saw on Facebook as people discussed Domino’s appearance:

Uhh, riiiiiight. Because having a Black woman play a superhero—and having that woman proudly display Black features through her hair—means that Deadpool 2 is a “social justice experiment.”

If you start looking outside of Facebook, the criticisms about Beetz’s Domino look continue to land squarely on her hair and skin color. Because of course they do.

@VancityReynolds The actress for Domino is fine, but change the eye to a black dot and short hair.
The white spot is to similar to your

“I’m not racist but” is never a great way to start any sentence, ever. It should, in fact, be the first indication that you should shut your mouth and never complete that sentence.

I am not rasist but I am a fan of comics and #Domino s hair is supposed to be dark blue and her lips two and her skin is… #DeadPool2 pic.twitter.com/azgBR15P9w

“Positive discrimination” is not a thing, Jaqueline.

(About Domino) k no, that “frizzy hair” is the way BW’s hair grows naturally. You can’t say yes to black ppl and no to black features lol pic.twitter.com/5xUxO5vLGx

Happily, there are many, many people enthusiastic about Domino’s appearance and what it represents—which proves the power and importance of this particular representation in the first place. This is the only conversation we should be having about Beetz’s Domino hair. Everyone who finds themselves about to type out an extremely unneeded criticism needs to help themselves to a seat and sit on their hands.

DOMINO: BLACK GIRL W VITILIGO AND ROCKIN THAT NATURAL HAIR. lterally no other version of domino could ever top this wtf im in love

Seeing Zazie Beets rock her natural hair as #domino in #DeadPool2 makes it that much better! I’m stoked!! ✊

And, finally, let’s keep this in mind, kids:

It’s a comic book. It’s not real. If people can believe Ben Affleck as Batman, we’ll all be fine here.