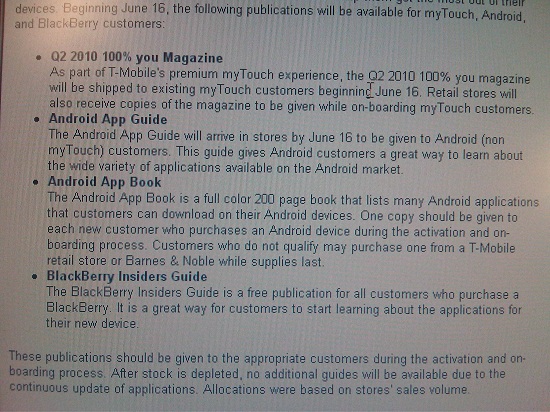 PhoneDog has gotten ahold of a leaked internal guide for T-Mobile employees that details a new strategy underway at the mobile provider: Apparently, they’re going to start pushing Android and BlackBerry apps in a big way starting at or around June 16th. One guess why: While T-Mobile execs have said that they would “definitely be interested” in carrying the iPhone, so far, rumors to the effect that they would do so in 2010 haven’t panned out yet, and pushing apps for Android and BlackBerry could be a way to counter AT&T’s smug but effective app-centric iPhone promos.

Speculation aside, the guide says that by June 16th, T-Mobile will be giving an “Android App Guide” to Android customers to help them navigate the universe of Android apps. There’ll also be something called the “Android App Book,” which’ll run at 200 full-color pages and be given to customers who purchase Android devices “during the activation and on-boarding process.” Customers who don’t qualify will be able to buy them from T-Mobile stores or Barnes & Noble. (They’re not currently available at Barnes & Noble’s website, however.)

As for BlackBerry customers — well, you probably couldn’t fill a 200-page book with BlackBerry apps if you tried, but T-Mobile will also be pushing the BlackBerry Insiders’ Guide, a “great way for customers to start learning about the applications for their new device.” It’ll be available for free if you buy a BlackBerry.