404 Country Not Found: Looks Like Syria Just Disappeared From the Internet [Updated] 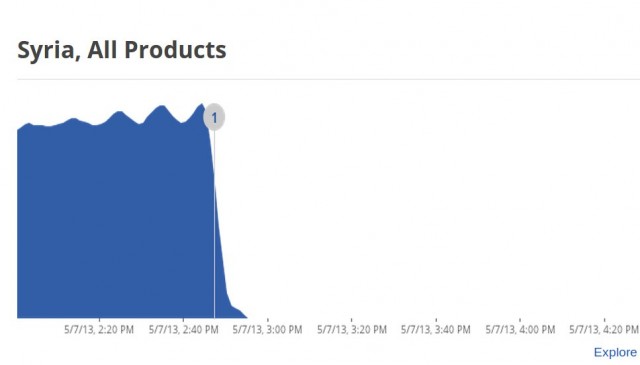 There aren’t a lot of details at the moment, but it appears that as of about 2:45 PM EDT today, Syria has gone offline. The chart above is from Google’s Transparency Report and it shows the sudden drop off in Syria. Umbrella Security Labs — the research arm of Internet security firm OpenDNS — has data to bacs it up as well, although they can’t say what the cause is at this time.

Past incidents of Syria going offline have been caused by both government action, and damage to the infrastructure, and it’s not yet known what caused today’s blackout. It could just as likely be one thing as another, so speculation could go either way.

Umbrella Security Labs is also reporting that at this time it’s not known whether Internet traffic within Syria is still functioning, but it is effectively cut off from the rest of the global Internet.

Update: The original post did not reflect that Umbrella Security Labs is part of the OpenDNS firm.