Syfy’s Blood Drive Is Disgusting and Over the Top, If You’re Into That 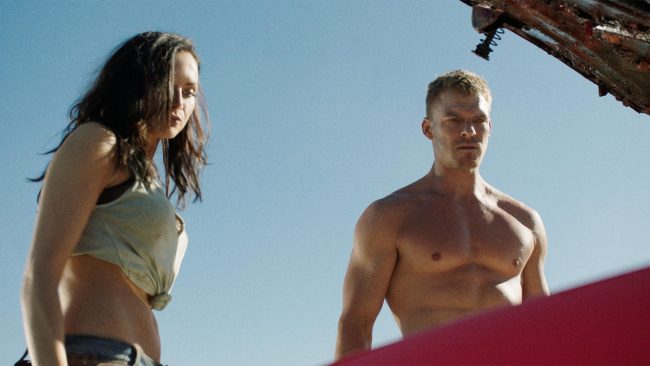 Syfy’s new grindhouse show Blood Drive has absolutely no subtlety or restraint in its deranged violence, and that’s kind of the point.

If you’ve caught any of the ads, clips, or social media posts for the new 13-episode series you’ll know that the show isn’t so much in-your-face as it is curb-stomping it into a flesh-eating car. The dystopian premise takes you into a world where cars run on human blood and we follow characters is a cross-country Death Race type competition, with our main protagonists being Arthur, a upright cop there against his will (Alan Ritchson) matched with a more experienced driver, Grace (Christina Ochoa). It’s a Blood Drive, get it?

The show proudly embraces the brutality of it all, and holds nothing back. Rivers of blood flow in every episode, where any and every taboo is absolutely exploited. Cannibalism, torture—you name it. While at face value this kind of “Oh, are you outraged? Is this too edgy?” attitude can come across as insufferable (they’ve gleefully set up a hotline for complaints), there’s a can’t-look-away element to the humor and sheer shamelessness of the show. It’s not for everyone and they’re totally fine with that. Still, there’s an emotional core to the story of particular drivers and as we progress, we start unlocking some backstories. You come for the wildness, and stay for the characters.

Seriously though, while I think all the promotional material makes it explicitly clear, please make sure you know what you’re getting into because I would strongly advise against springing Blood Drive on anyone who might be sensitive to violent images or assault. When you watch or follow the show on different platforms, there’s a kind of pact that occurs as viewers are referred to as sick freaks that rejoice in the disgustingness. That type of engagement isn’t really for me, but I know some who love participating in that kind of community. I don’t really have an issue with it, but I think you should know what you’re getting into before jumping on the Blood Drive train.

The nostalgia element is also particularly strong, which is exemplified in the package they sent us that included a VHS alongside some lollies (because of course Grace is always playfully eating candy) and chocolate. However, after that cannibalism episode I have to say I’m a little cautious? (P.S. does anyone have a VHS player I can borrow?)

Grindhouse fans will love @blooddrivesyfy in all its gory glory. PS does anyone have a VHS player we can borrow?

There’s a lot of great television out there that in its elegant minimalism, nuanced commentary, and understated performances give us thoughtful examinations of the human condition. I love those shows, but there are times you just want to watch a show that includes lines like, “Have you seen gas prices lately?” with camp and full self-awareness. Are there definite political undertones to the ways the police literally collect teeth, a gigantic corporation exploits the poor, and people sell blood to survive?

Yeah, but sometimes you just wanna watch some Bad Dudes get blood-drived.