SyFy's Newest Superpowered Romp Alphas Is Pretty Regular, Except for One Part 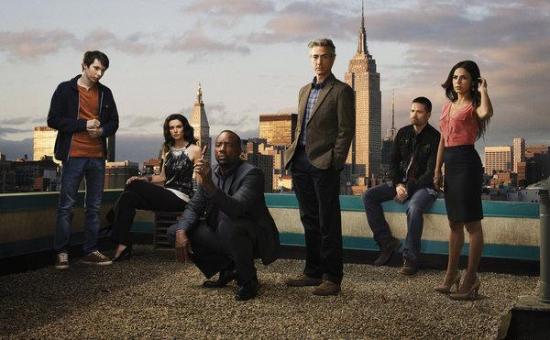 I’ve been wanting to write about SyFy’s newest superpower show, Alphas, for a while now, pretty much since I watched the very first episode. I wasn’t exactly sure how I felt about the show until I saw this article over on Wired and, basically, disagreed with everything.

First off, if you don’t watch the show, you should probably know what it is about. Alphas is about a team of people with superpowers who fight superpowered crime and, less frequently, regular crime. Yep. The show is very regular, except for one part, which happens to be one of the best things happening on television right now.

I find it difficult to take anything seriously when the term “power” or “superpower” is used in a serious matter. A few shows in recent memory probably felt the same way — replacing “power” with “ability” or some other synonym — the most notable being The 4400 and Alphas. So, Alphas received an immediate point for not having grown adults running around town saying things like “Just use your powers!” or “Wait, let me charge up my powers!” I understand there isn’t really another term for “superpowers,” but the reason why I don’t quite jive with the term is because superpowers tend to fall into the trap of being too powerful and used for a variety of characters throughout superpowerdom, which tends to lead to stronger foes being necessary, which then leads to the superpowers being used in even stronger ways. It’s a never-ending cycle and leads to superpowers being so overpowered that the situations the heroes get into become increasingly ridiculous to compensate for their overwhelming power. When I saw that the heroes on Alphas had abilities, as the show calls them, that were very limited, it scored another point. After that, though, I found that the show only gets one another point. Not because it is bad, but because apart from the aforementioned limited abilities and one of the characters (who we’ll get to below), the show is astonishingly regular.

The show focuses on Dr. Rosen, played by the venerable David Strathairn, a psychiatrist who deals with alphas, the show’s titular term to describe people with special abilities. He put together a team of alphas to fight crime and villain alphas. Bill, an ex-FBI agent, can summon super strength, but only for a quick burst because it puts stress on his heart. Nina, your stylish rich girl stereotype, makes people do what she says for a few minutes, an action the show dubs as “pushing” people. Cameron has super accuracy, something that actually makes him quite good at parkour somehow, but he loses the accuracy in critical moments due to nerves; he’s basically Marvel’s Bullseye, but not a lunatic. Rachel has enhanced senses, to the point where she can detect throat cancer on someone’s breath, but can be overwhelmed by too much stimuli. Finally, we have Gary, a high-functioned autistic who can sense electromagnetic waves in such a way to where the show depicts it as him being able to see floating screens with information on them, even television shows, and can also hear all accompanying audio. Ryan Cartwright’s portrayal of Gary and the dialogue written for his character is where Alphas stops being so regular and provides some of the most entertaining scenes and pieces of dialogue currently on television.

So far during season one, most of the episodes feature a new rogue alpha that Rosen’s team must capture in some way, resulting in said rogue alpha being sent to some ominous government-run imprisonment camp for alphas. The show’s story seems to follow the general arc most similar shows follow: Have a standalone episode, but tie it all together, either by theme or by actual plot, in the last five minutes or so to build up the events that will probably culminate in the season finale. Many popular shows do this — Burn Notice, Eureka, even geekdom’s own Doctor Who — and for those that desire some sort of deeply-woven narrative, so far, Alphas won’t whet their appetites. Instead, Alphas seems more concerned with making sure people can jump right in — never a bad strategy, but one that — as fans of Burn Notice will surely groan — quickly becomes tiring.

Though the show hasn’t even finished its first season as of yet, it hasn’t done anything to make its audience worry about the characters. Sure, it’s possible the writers can throw us a curveball and suddenly kill off a character, but so far, the episodes haven’t done anything to show us we need to be worried about our heroes. They’ll just use teamwork and save the day, then laugh at the end of the episode when someone makes a joke, or maybe a character will stare out of a window, anxious of what the future might hold.

It seems like Alphas doesn’t know what it wants to be, so it tries a little of everything. We have our love story, we have our X-Men style debate of whether or not alphas are just human and should be treated as such, we have crime fighting, and we have Gary’s charming humor. Though any piece of entertainment media shouldn’t be focused solely on one theme, Alphas doesn’t really blend the themes together, as they seem separate of the rest of the show. Even the title sequence can’t seem to decide what the show is about, blasting a fun rock track while showing vastly contradictory imagery: Grainy footage of a human flying through the sky in front of some buildings, what is that thing, look at how mysterious and scary the show is, but wait, now there’s a guy breakdancing for no reason.

Oddly, the show seems to know exactly what to do with Gary. The other actors are fine and the writing isn’t bad — just regular — but the perfectly tailored dialogue for Gary compared to the otherwise completely regular dialogue for every other actor on the show and obvious plot points make me wonder why the quality surrounding everything Gary-related raises so significantly. It is instantly noticeable, and it feels like the show has some kind of brilliant gunslinger consultant that breezes into writing and filming sessions and only has say over any scene in which Gary makes an appearance.