Looking Past the Mask of “Politeness”: Tilda Swinton and Margaret Cho’s Email Exchange 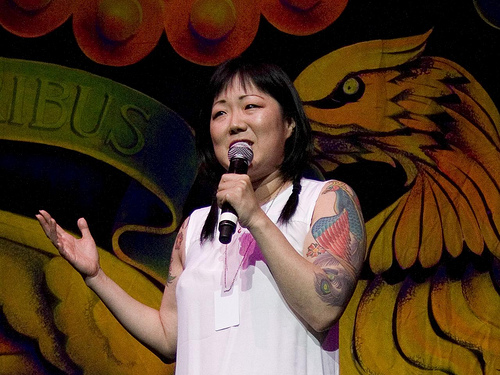 When the news first broke about Margaret Cho talking on Tigerbelly about an exchange with Tilda Swinton that left her feeling “like a house Asian,” I was angry alongside her and many other listeners. However, those feelings became more complicated when Jezebel released the emails between the comedian and actress, and Cho’s comments didn’t feel like a fully accurate portrayal of the conversation.

While I understood why people felt upset at Swinton being harshly criticized for what looked like a level-headed and polite exchange, I couldn’t shake an intense discomfort at a wave of commenters calling Cho a deceitful liar and delighting in ripping her down as an attention-seeker. Dismissing or minimizing the reaction a woman of color felt towards a conversation about whitewashing felt, well, wrong.

I realize now that this was because I had been in Cho’s position before–that awkward position of “educator” when a white woman who has participated in your marginalization approaches you with a conversation about representation. I’ve had to very politely “debate” white women who make it clear partway through the conversation they’re more invested in how they come across and how open-minded they actually are. I’ve had white women point to their conversations with me and pat themselves on the back for engaging with me–as if our communities should be showering them with gratitude for letting me prove my humanity to them. I thought of these moments as people defended and praised Swinton, who joked about an Ancient One prequel, for reaching out of her own accord while they threw insults at Cho for being mean-spirited. If we’re going to encourage dialogue, it’s important to acknowledge that the playing field isn’t always even in these discussions.

I’m not saying that Swinton went into this with anything other than earnest and good intentions–that would be an impossible and reckless claim. I’m simply stating that Cho, like many people of color, probably has experienced many of these conversations before, and it’s likely that her feeling “weird” about this exchange was built on those experiences–just as the reactions to Doctor Strange were built on a long tradition and history of whitewashing and erasure.

Other writers of color saw their own experiences mirrored in these emails. Omar Sakr of The Sydney Morning Herald pointed out that Swinton’s reaching out was a request for emotional labor from Cho, stating “the whole thing reeks of white guilt seeking to be absolved.” Sakr goes on to point out plenty of content on Asian representation and whitewashing is readily available online if she only tried to look for it. Gene Demby of NPR Code Switch and The Love Life Of An Asian Guy both posted Twitter threads I recommend reading that break down the emails and reactions.

When we take a closer look at the emails, the clear white feminism (“I’m a Scottish woman of 55 who lives in the Highlands. There’s precious little projected on contemporary cinema screens that means a great deal to my life”), the repetition of the same rhetoric the creators used to defend her casting (which, again, we don’t buy), and concern with her image (“I have attempted to correct the notion that I accepted an offer to play an Asian.. (!!) the most significant and damaging misunderstanding out there, it seems”) become evident.

Whether Cho retold her story in the best way is difficult to answer–but invalidating her feelings and reducing her to an overreacting, angry Asian woman is wrong. Ultimately, both Swinton and Cho believe the emails speak for themselves, and I hope that that readers are willing to look at the subtext behind the politeness. Cho responded to the emails in a statement to Entertainment Weekly that demonstrated a firm stance:

Asian actors should play Asian roles. I believe my emails stand on their own and should be taken for the spirit in which they were intended. I am grateful that the debate has now entered the national discussion and remain a huge fan of Tilda’s.