MTV’s Sweet/Vicious Showcases Women Who Fight (and Fight Back) 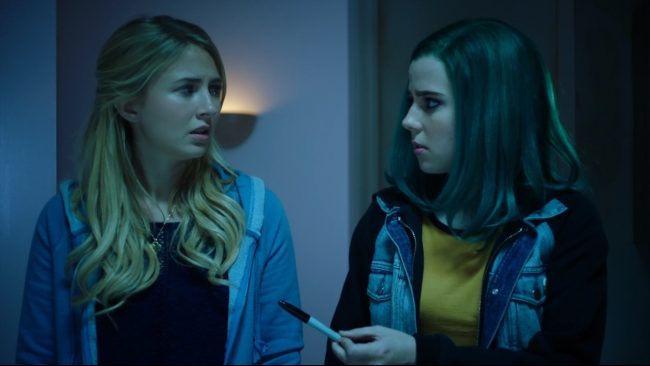 The problem of campus rape is nothing new, but as of late it has been getting a lot of attention in the media with documentaries like The Hunting Ground (2015), controversial artistic statements like Emma Sulkowicz’s “Mattress Performance (Carry That Weight),” and high-profile cases like that of Brock Turner, who served just three months in jail for raping an unconscious woman behind a dumpster. MTV’s new original series, Sweet/Vicious, brings college-aged female vigilantes to the screen and isn’t afraid to buck genre conventions in the process, drawing on the superhero genre and even adding some comedy to its weighty subject matter. Jules (Eliza Bennett), a sorority girl who is also a rape survivor, teams up with Ophelia (Taylor Dearden), a directionless weed dealer and hacker, to fight sexual assault in the best way they know how: by seeking out rapists and enacting vengeance upon them through violence. It’s a controversial premise, to be sure, but one that is powerful.

Created by Jennifer Kaytin Robinson, 28, who works closely with showrunner Amanda Lasher and executive producer Stacey Sher, Sweet/Vicious amplifies women’s voices and explores the issue of campus sexual assault with depth and breadth. Female friendships, in all their complexity, take center stage—whether it be the complicated relationship between Jules and her best friend and sorority sister Kennedy or the budding alliance between Jules and Ophelia. While the show features both male and female characters that are nuanced and well drawn, the female characters really live up to the title of the show; they are multifaceted, complicated, and worthy of attention. This is noteworthy considering that only 15% of screenwriters are female (a decrease from 2009’s 17%), and only 22% of new television shows have female showrunners. While Hollywood is taking some steps to bring more diversity to film and television, there is still much work to be done—but Sweet/Vicious, helmed by a trio of female television professionals, is a solid effort. The show is timely, impactful, unconventional, and often visceral.

In one such visceral scene, Jules and Ophelia taser a male student’s crotch after they discover he used a dating app to lure a girl to a hall on campus before raping her. The decision to continue these vigilante acts does not come easily to Jules, however. In the aftermath of the events of the pilot episode, she struggles with whether or not to continue her fight. In one of the most powerful scenes in the second episode, Ophelia shows Jules a bathroom where survivors have found camaraderie by sharing messages. Faced with this, Jules must make a decision as to whether or not to continue the fight. It is a scene that plays out with very little dialogue, and yet its impact can be felt long after the episode ends.

Taking drastic measures to avenge survivors and protect others from future harm, however, often means that the protagonists must sacrifice something, must give of themselves. In one of the most heartbreaking moments of the fourth episode, Ophelia helps shut down a sorority engaging in dangerous and degrading hazing practices (I hesitate to call them rituals), only to find that her mother, with whom she had rekindled a relationship and who is an alumna of the sorority, no longer wants to be around her. The girls’ actions, which are often morally ambiguous, have consequences. These consequences play out not in a clichéd way, but in a realistic, often heart-wrenching way. This underscores just how strongly they feel about what they are doing.

Jennifer Kaytin Robinson has made it clear that she does not endorse violence, and with its heightened world and larger-than-life premise, Sweet/Vicious is, in many ways, a symbolic act of fighting back—against a current political climate that dismisses and demeans women and trivializes sexual violence. Against this tide, with every thought-provoking episode, Sweet/Vicious unapologetically declares that female voices matter and cannot—will not—be silenced.

Alessandra Bautze is a writer whose work often tackles diverse issues of social import. Her screenplays and television scripts have garnered numerous awards. She holds an M.F.A. in Screenwriting from The University of Texas at Austin and a B.A. in The Writing Seminars and Film & Media Studies from Johns Hopkins. She loves strong female protagonists and is an avid fan of Doc Martens. Visit her website at alessandrabautze.com or follow her on Twitter and Instagram @abautze.