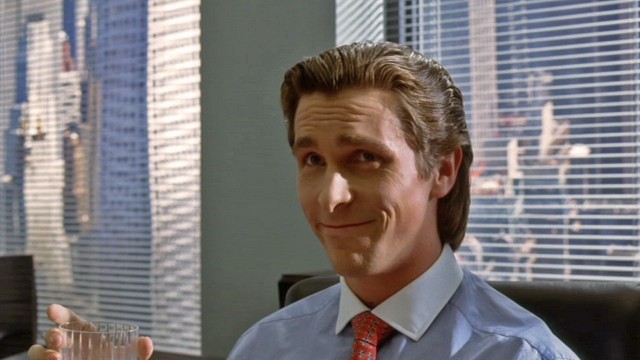 The first time I watched American Psycho (after an embarrassingly long time of not having seen it), I didn’t just walk away with a newfound respect for Patrick Bateman’s skincare regimen. The film itself is unquestionably a satire of greed and materialism, with Christian Bale playing the banker who starts to let his passions for the finer things in life twist into the need to have everything–including control over others’ lives.

One of the scenes of the film that best represents the beginnings of Bateman’s competing nature is the business card scene–which, in the movie, is performed by a group of men. But what would it look like if it was flipped around and played by women?

That’s a question comedian Dani Faith Leonard hopes to answer with her new video series, Swapped, which will take famous scenes from films and flip the genders. In this first installment, the business card scene from American Psycho is played entirely by women, including Mara Wilson in the role originated by Jared Leto in the film:

In an exclusive interview with Refinery29, Leonard said the intent of the series is to add a visual element to the conversation on gender in film. “It’s meant to start conversation about traditional gender roles in American movies. We’re looking to gender-flip the movies, and place men in the women’s roles. And we’re also looking to see what challenges we’re faced with when men are in what are traditionally feminine roles.”

It’ll be interesting to see the kind of effect flipping genders has on classic scenes from movies–and it’s also exciting that Swapped will not only focus on women playing roles previously inhabited by men, but men playing the roles that had been originated by women. I can’t wait for more installments in Swapped. (Hopefully the next one will be quicker than getting a reservation at Dorsia.)