LOL! Sexist Chess Grand Master Says Men are “Hardwired” to Be Better at the Game Than Women 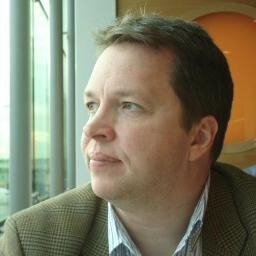 In an interview with New in Chess that was later picked up by The Guardian, 49-year-old chess grandmaster Nigel Short–who has lost eight times to date to female grandmaster Judit Polgar–says we should “gracefully accept it as a fact” that men are inherently better at things like chess than women. I think I know someone who agrees with you, bro:

The 49-year-old, who won his first grandmaster title 30 years ago, had this answer when asked about the gender divide in competitive chess:

Why should they [women] function in the same way? I don’t have the slightest problem in acknowledging that my wife possesses a much higher degree of emotional intelligence than I do.

[…] Likewise, she doesn’t feel embarrassed in asking me to manoeuvre the car out of our narrow garage. One is not better than the other, we just have different skills. It would be wonderful to see more girls playing chess, and at a higher level, but rather than fretting about inequality, perhaps we should just gracefully accept it as a fact.

Short’s comments were responded to by Amanda Ross, head of London’s Casual Chess club, who noted that it’s

[…] incredibly damaging when someone so respected basically endorses sexism. Judith Polgar, the former women’s world champion, beat Nigel Short eight classical games to three in total with five draws. She must have brought her man brain. Let’s just hope Nigel didn’t crash his car on those days, trying to park it. At least this resolves the age-old debate as to whether there’s a direct link between chess-playing ability and intelligence. Clearly not.

Short had this response:

@CasualChess @NewInChess No. You seem to suffer from incomprehension. Men and women do have different brains. This is a biological fact.

In a Sky News interview, Short later elaborated on his controversial comments:

It’s quite easy to demonstrate there is a fairly substantial gap between men and women. Women have all sorts of skills where they are superior to men” he said, adding that the fact Polgar had once beaten him was irrelevant to his general point.

The fact that I have one bad score against an individual doesn’t prove anything. I’m talking about averages here … statistically women don’t [compete] in the same numbers. The average gap is pretty large and that is down to sex differences … Those differences exist.

There’s one aspect of chess for which Short is willing to give women credit, however; in a 2012 New in Chess article he referred to female Olympiad volunteers by the British slang “totty,” writing “All Olympiads have their volunteers, but Manila 1992 was unsurpassed in the sheer volume of totty. There were literally hundreds of smiling and invariably polite 18-20-something-year-old hostesses. Not a few liaisons were struck up during the course of two weeks.”

Obviously there’s no shortage of asshats in specialized, male-dominated fields like chess, but Short’s belief that men are inherently better suited for some pursuits than women is indicative of an attitude that obviously extends far outside the chess community.

In many ways, Short’s total disregard for the advantages afforded to male chess players over female competitors or the guy’s club atmosphere (dismissing female volunteers as “totty?” Really?) that might dissuade women from pursuing a chess title is similar to the way men often explain the gender gap in STEM fields by saying that women “just are” less interested in coding or computer science than men. Short’s sport may be niche, but his opinions and influence unfortunately aren’t. 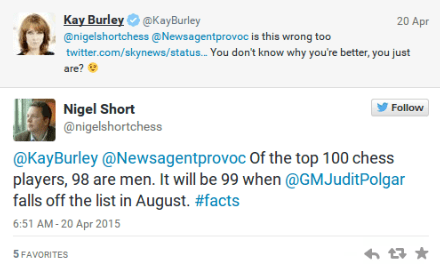 In a TIME interview earlier today, Polgar herself addressed Short’s dismissal of sexism in chess, saying [bolding our own] “I grew up in what was a male dominated sport, but my parents raised me and my sisters [to believe] that women are able to reach the same result as our male competitors if they get the rights and the same possibilities.”